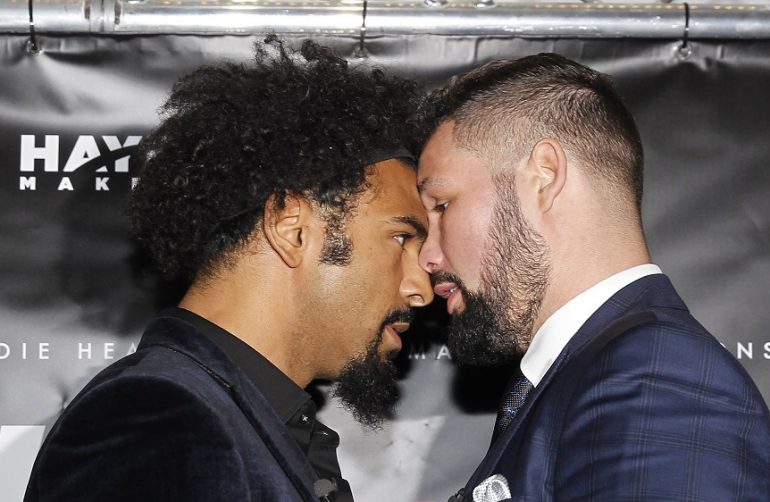 Haye (left) and Bellew (right) to collide in a money-spinning rematch. Photo by Lawrence Lustig
29
Sep
by Tom Gray

Revenge has been on David Haye’s mind all throughout rehabilitation, and soon he’ll have his chance.

Fierce British rivals Tony Bellew and David Haye will clash in a 12-round heavyweight rematch at the O2 Arena in London on December 17, it was announced Friday.

Bellew, the WBC cruiserweight titleholder, exceeded expectations in March by surviving the early rounds of a fight which many considered to be a mismatch when it was officially announced.

But in a dramatic encounter, Haye ruptured his Achilles tendon in Round 6 and Bellew seized the advantage by battering, and flooring, his foe en route to an 11th-round stoppage.

Six months later, Haye has gone through extensive physiotherapy, appointing a new training team and he is looking forward to exacting revenge. His opponent, however, remains unfazed.

“I will have the exact same attitude I had going into the first fight – win at all costs,” said Bellew. “I will be victorious and I will end David Haye’s career. Another loss to me closes the curtain on the ‘Hayemaker.’

“This isn’t personal anymore, it’s strictly business. This is just another fight. My world has been put into perspective in the last four weeks. It’s been the toughest four weeks of my family’s lives and I will dedicate my victory to my late brother-in-law.

“(Haye’s) another year old, the body is more worn and he won’t be able to live with a younger, fresher and more active fighter. He just can’t sustain the tempo and pace once we go past three or four rounds.”

Haye, who held world titles at cruiserweight and heavyweight, has been injury prone in recent years. A cut eye and reconstructive shoulder surgery put paid to two scheduled bouts against countryman Tyson Fury and a 3-and-a-half-year layoff ensued.

The Londoner came back with two knockouts wins in 2016, but the opposition was undistinguished.

Bellew, as game as they come, was a major step up in class and Haye’s body ultimately betrayed him in a competitive fight. This time, however, the 36-year-old boxer-puncher promises to right a wrong.

“(Bellew) somehow won the lottery in our first fight but, believe me, he won’t win the lottery twice,” said Haye. “I’ve been training every day for over six months. I already feel fitter, stronger and more athletic than I did for our first showdown. I relish the opportunity to re-write the ending of the Haye Bellew story.”

Bellew’s promoter, Eddie Hearn said, “I’m delighted to get this one over the line and give the fans the rematch they want to see. Tony had plenty of options on the table, but this was the biggest fight out there and one he wants to end once and for all.”