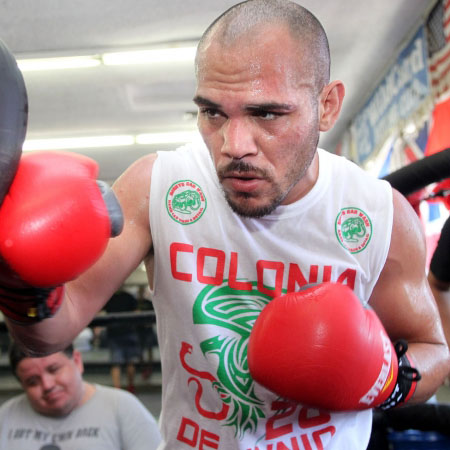 Terry Flanagan and Felix Verdejo were scheduled to fight for some time, but it never came to fruition after numerous injuries suffered by the Puerto Rican prospect.

Now, it may never happen.

After Verdejo suffered yet another ailment, scraping his September stay-busy fight, the WBO swiftly moved him from the No. 1 position in the lightweight rankings. With it, he’s longer in line for a shot at 135-pound titleholder Terry Flanagan.

The new man atop the ratings? Ray Beltran, who has impressed with two knockouts over prospects in his last three fights and, like Verdejo, is promoted by Top Rank. But Beltran isn’t going to daddle and let his chance slip by like Verdejo. He’s ready to pounce now.

“Flanagan is calling out other champions, I guess, to try and unify but it’s clear he doesn’t want to face me,” Beltran, 36, told RingTV.com. “I’m the mandatory so you want to defend against a real challenger, your most dangerous challenger? Than fight me and prove you’re a solid champion.

“I earn the title shot and every one of these champions find a reason not to fight me. I respect all champions but I fear none of them. I’ve been to the U.K., people know what I can do and so does Flanagan. I busted up (Ricky) Burns, this time I won’t leave it to the judges.”

Indeed, Beltran (34-7-1, 21 knockouts) was robbed of his first world title when the judges called his 2013 beatdown of Burns a draw. It took him another year to grab his second challenge for a title, but unfortunately, that came against other-worldly talent Terence Crawford, and Beltran was no match.

But that’s OK. The Mexico native, who is fighting to stay in the U.S. permanently (he lives in Arizona and remains here on a work visa) has steadily climbed the ratings and is now recognized as the No. 5 lightweight by THE RING. A title victory over Flanagan would all but seal his EB-1 green card application — which requires proof of exceptional ability in a particular field — to stay stateside with his family for good.

“Team Beltran thanks the WBO for recognizing Ray and his hard work to climb the mountain to No. 1 in the world,” Beltran’s manager Steve Feder said. “Nobody gave this to him. We are well aware that we are not on anyone’s list, but they are all on ours.

“(Mikey) Garcia, Flanagan, (Jorge) Linares, all of their promoters know the telephone number for Top Rank. We want the belt and if Flanagan and others are for real they will not dodge us.”

And there’s no reason to believe Flanagan (33-0, 13 KOs) would. He’s done nothing but turn back the challenge of each fighter who’s stepped in the ring with him since he claimed the title in July 2015. The 28-year-old Brit has now defended his title five times, and none of the fights have been remotely competitive.

That would certainly change against Beltran, a man who is famished for success, and a chance to cement his immigration status once and for all.