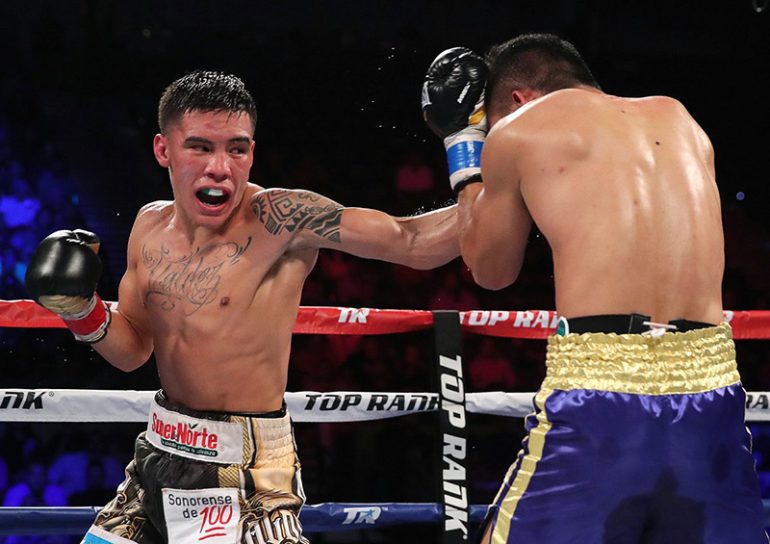 In the end, he prevailed, retaining his featherweight title with a unanimous decision over a surprisingly tough challenger in Filipino Genesis Servania Friday night in an ESPN-televised bout at Tucson Arena on a Top Rank card that also included super middleweight beltholder Gilberto Ramirez’ dramatic victory over Jesse Hart in a another title defense.

“I knew it would be a tough,’’ Valdez (23-0 19 knockouts) said after getting up from a fourth-round knockdown, only the second one in his career. “I was prepared for that.’’

A crowd of fans from Nogales and Tucson, however, probably were as prepared for what is rapidly becoming a Valdez trademark. He was in tough fight in his last outing against Miguel Marriaga. He was in tough against Servania, unknown despite his unbeaten record before the opening bell. 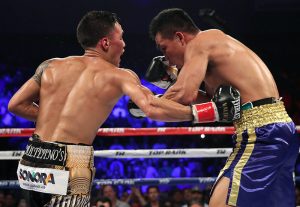 “He’s a crowd pleaser,’’ said Robles, who probably wishes he was not so anxious to please.

He was there to please a hometown crowd in the fifth with a knockdown of Sevania (29-1, 12 KOs), who hit the deck from a perfectly placed left hook. Then, Valdez went after him, but couldn’t put together the finishing blows. The fight would go on and the fans would move closer and closer to the edge of their seats with each and every round.

Promoter Bob Arum said he hopes to put together a deal for Valdez to fight Belfast featherweight Carl Frampton, sometime next year.

Meanwhile, Robles wants to get Valdez to become a better listener between rounds. There were a lot of potential distractions for Valdez before opening bell. He voiced his support for the Dreamers, young undocumented immigrants who are fighting to stay in the United States. Arum said he gave about 300 to 400 free tickets to Dreamers who documented their immigration status.

Valdez also fought in front of a grandfather, Luis Fierro, who was arrested last week on what was reportedly for an old traffic ticket. Valdez said he is facing charges that could lead to his deportation. He said got his grandfather out of jail in time to see the fight.

“There were a lot of emotions before this one and Oscar is an emotional fighter,’’ Robles said.

Now, they can talk about what’s next.

In the end, it belonged to Gilberto Ramirez. 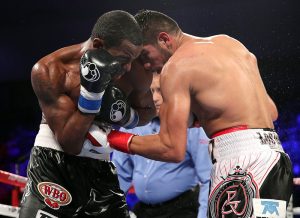 So, too, does Ramirez (36-0, 24 KOs). The Mexican dedicated his victory to America’s young, undocumented immigrants, so-called Dreamers, some of whom were in the crowd of 4,103. He dedicated it to the earthquake victims in Mexico City. He also thanked Hart (22-1, 18 KOs), who he knocked down in the second round with a right hand.

“A great show for everybody here and all my people in Mexico,’’ Ramirez said.

Conlan powers himself to 4-0 record

Michael Conlan’s right is best remembered for an obscene gesture. But there’s more than just a middle finger in that hand. There’s power and it speaks for itself. It landed loudly and decisively, taking out a tough Kenny Guzman of Montana in the second round of the card featuring Servania-Valdez.

“I was a bit reckless early,’’ said Conlan (4-0, 4 KOs), a Belfast featherweight who famously – or infamously — flipped off the judges at the 2016 Olympics.

He was altogether devastating a little later. Poor Guzman (3-1, 1 KO) never had a chance to be offended. He never saw it coming. Conlan, whose next fight is scheduled for Dec. 9 at New York’s Madison Square Garden..

Conlan, a Valdez stablemate in trainer Manny Robles’ gym, had the right high and cocked life the trigger on a gun. Guzman was out the second it landed. He got up and referee Wes Melton ended it at 2:59 of the round.