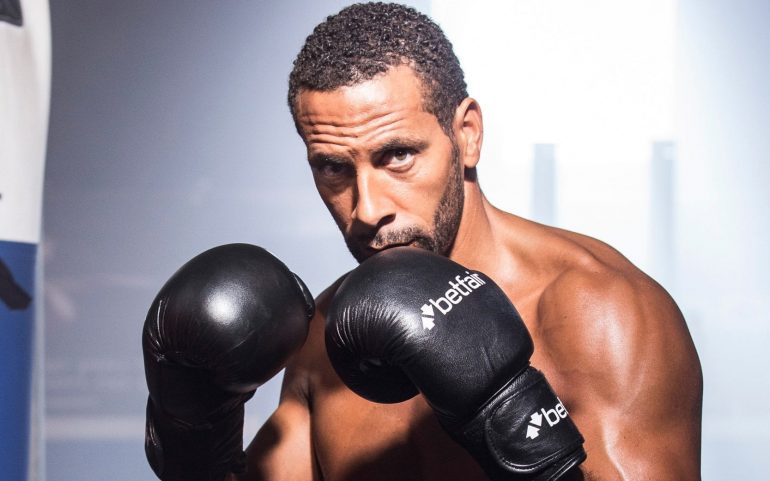 Ferdinand, 38, enjoyed a hugely successful 20-year playing career. He played for West Ham and Leeds United before signing for Manchester United, in 2002, for a transfer that totaled £34 million (nearly $46 million).

The Central Defender won six League titles, two League Cups and a European Champions League during a glittering 12-year career at Old Trafford. He also played for England on 81 occasions and appeared at two World Cups.

In May 2015, he brought the curtain down on an outstanding career, that will see him regarded as one of the best defenders England has ever produced.

Tragically, earlier that month, his wife Rebecca passed away from breast cancer. The couple had three children together.

Understandably Ferdinand found things very difficult and, to his immense credit, opened up and found solace when he appeared in a BBC documentary “Rio Ferdinand: Being Mum and Dad.”

Tuesday’s news was greeted with mixed emotions within the boxing community.

Former two-division world champion Ricky Hatton – who is a keen supporter of Manchester City, United’s crosstown rivals – feels it’s OK to allow Ferdinand the opportunity but does offer a warning.

“If it’s something that he really wants to so do, then fair enough,” Hatton told RingTV.com. “He’s said he’s serious and it’s not a prank, so, if he is serious, he’s been a professional athlete all his life, assuming he passes all the medicals from the (British Boxing) Board of Control. They let (cricketer) Freddie Flintoff and (soccer player) Curtis Woodhouse (box) so why not Rio?

“Boxing is a hard sport and you can’t play at boxing. He needs to make sure that he doesn’t cut any corners and gets the right training and support. He’ll know once he starts training, if it’s for him or not.”

Duke McKenzie, one of only three British-born fighters to win world titles in three weight classes isn’t so understanding.

“I think the whole thing is quite pathetic. It’s crazy,” McKenzie said. “You’ve got more and more sportsmen from other sports, of a certain age, who think they can transfer from one sport into ultimately the hardest sport there has ever been.

“What these guys don’t realize – and I’m sure Rio would understand as a professional sportsman himself – he’s trained his whole life in football (soccer) and became an expert. I don’t know what makes him think he can come into boxing at 38 years of age and be a success at it. Very, very few people have and very, very few people can. Even guys who have trained in the sport of boxing still don’t make a success of it from a very young age. He’s obviously clutching at straws.”

McKenzie wonders if perhaps the loss of his wife may have seen him take this path.

“I’ve got empathy for the guy,” he said. “He’s obviously suffered a lot of personal tragedy and he’s lost right now in his own mind. He’s absolutely destroyed and lost. He’s had the worst kind of thing that can happen to any human being, when you lose someone you love. But boxing is the wrong way to try to find yourself. This could send him over the edge, quite easily.

“He’s not good enough to be a good amateur, never mind a good professional boxer. I would be shocked and dismayed if the British Boxing Board of Control gave him a license to fight. In my book, it’s not right. I don’t see there’s any place for him or anybody like him, who seems to think you just put on a pair of gloves and call themselves a professional boxer.”

McKenzie’s nephew, Leon, also made the transition between the same sports in 2013. While he wasn’t as successful as Ferdinand, he did play at a high level.

He recently retired with a record of (8-2-1, 4 knockouts) having fought for several regional titles.

McKenzie is quick to point out the difference.

“He’s been born into boxing,” explained McKenzie. “He was boxing before he was a footballer. His dad Clinton was a British and European champion.

“I’ve got a 15-year-old son, who was a very talented footballer at Crystal Palace. Six months ago, he said, ‘Dad, I don’t want to do football anymore. I want to do boxing.’ I was the first to say to him, ‘Well done. Why not?’ but the difference is my son is 15. He’s got time to develop and learn, take his knocks and come back from it.

“When you start getting hit on the head at 30-odd years of age, as has been proven with (former cricketer Andrew) ‘Freddie’ Flintoff or Conor McGregor, they were both successful in their own sports but neither of them could box.

“It’s totally disrespectful to the sport, showing absolute disdain and no regard for the sport. You don’t play boxing. It’s not a game. You don’t get tired and pass it down the wing to one of your teammates. You might lose three or four nil; blame your squad. When you lose in boxing, you lose alone. Boxing will send you into the lowest part of depression you could ever want to be in; I promise you. I’ve experienced it.

“I, for one, wouldn’t want to see Rio Ferdinand, or any other sportsman that’s not a boxer, doing boxing.”