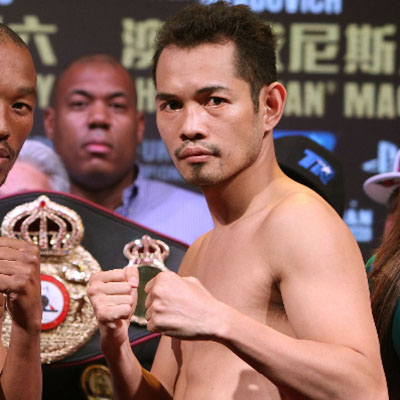 May 30, 2014, Macau,China --- (L-R) WBA undisputed featherweight world champion Simpiwe “V12” Vetyeka and four-division world champion and 2012 Fighter of the Year, Nonito "Filipino Flash" Donaire weigh in (Walters 125.5 lbs, Donaire 126 lbs) Friday for their upcoming world title fight, Saturday, May 31 from the Cotai Arena at The Venetian Macao Resort in Macau,China. Promoted by Top Rank®, in association with Tecate, PS4 and Foreman Boys Promotions, "Featherweight Fury- Donaire vs Vetyeka" will be televised in the US on HBO, same day at 4pm ET/PT. --- Photo Credit : Chris Farina - Top Rank (no other credit allowed) copyright 2014
22
Sep
by Ryan Songalia

Nonito Donaire is not oblivious to his shortcomings in the ring over the past few years.

He acknowledges his slip since being named “Fighter of the Year” in 2012 is owed, in part, to his inability to follow a game plan.

And it didn’t seem to matter who was in his corner – be it Robert Garcia, his father Nonito Sr. or Ismael Salas – when the bell rang, his only focus was landing bombs.

“I do have the tendency of just wanting to brawl for the past few years,” Donaire tells RingTV.com. “That’s all I’ve been doing regardless if I have a game plan to counter or to move or anything like that. I’d never follow that because I’d get caught up in brawling.”

Being aware of this tendency is one thing; doing something about is another.

But Donaire (37-4, 24 knockouts) believes he has figured it out and will look to test his discipline when he faces Ruben Garcia Hernandez this Saturday at the Alamodome in San Antonio, Texas. The fight will be a 10-rounder in the featherweight division on the undercard of the WBSS Cruiserweight quarterfinal fight between Yunier Dorticos and Dmitry Kudryashov.

The fight will be Donaire’s first since losing the WBO junior featherweight title to Jessie Magdaleno by decision in November. It will also be his first with longtime assistant Michael Bazzel in charge of the corner as he replaces Salas. Donaire believes that he’s always had it in him to devise winning game plans but what was missing was a voice to keep him on script.

He now says, among a variety of new personnel to his team, he’s added a “secret weapon” who will help him remember what to do when the going gets tough.

“I don’t think I’ve ever really had an influence with people that I can listen to or that have a big presence or voice for me to listen to,” says Donaire, a four-division champion. “I had great trainers but their voice wasn’t dominant enough for my desire to brawl.

“I’ve always been known to be a strategist. I’m a very strategic type of person, I’ve always made my own game plans. I just sometimes don’t follow them because I get caught up with the brawling.”

Donaire will also have a new promoter, having parted ways with Top Rank earlier this year following nine years together. He’s now being promoted by Ringstar Sports, which is headed by Richard Schaefer, with whom Donaire had been on friendly terms even during the “Cold War” years when the Swiss banker was with Golden Boy Promotions and locked in a bitter rivalry with Top Rank.

“We went with Richard because we just had the same mind of boxing in terms of what we want in boxing,” said Donaire. “Richard is willing to listen to the fighters, he’s willing to make the fight happen for the people and there’s a lot of opportunities with everybody out there.”

Though he’s 10 years younger than Donaire at 24, Hernandez (22-2-1, 9 KOs) hasn’t fought anything approaching competition that Donaire has faced. His is two losses came during the two occasions he stepped up in class, including a seventh-round retirement against Randy Caballero last year.

Returning to the 126-pound division, where he briefly held the WBA title, Donaire hopes he can finally make fights with the names that he previously was unable to share a ring with.

Stalwarts like Leo Santa Cruz, Carl Frampton and Abner Mares. Those are the fights that entice Donaire.

“When I came into the sport there was one goal that I forgot: to become the undisputed champion of the world. I almost got there but I got caught up with the success. But this time the success will be the strategy flowing within me.

“That’s pretty much what fired me up, is seeing my friends like Andre Ward taking over, [Terence] Crawford becoming undisputed. It sends a renewed desire in me to follow that path.”

He’s been the “Filipino Flash” throughout the years. Donaire is hoping to show there’s still some substance – and strategy – to accompany that flash.