Sergey Kovalev says he’s ‘clear headed,’ will be better than before 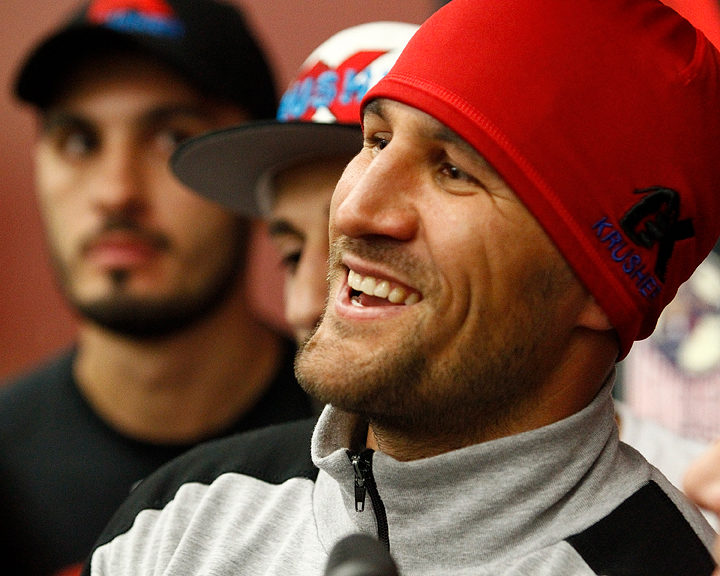 Photo of Kovalev at his media workout in Oxnard, California, by Craig Bennett/Main Events
21
Sep
by Michael Woods

Sergey Kovalev is “clear headed” following back-to-back losses to Andre Ward and looks forward to returning to the ring better than before, he said at a Thursday press conference to hype his fight against Vyacheslav Shabaranskyy on November 25 at The Theater at Madison Square Garden.

The Russian “Krusher” was solved by Ward in November 2016 and again in June. And, coincidentally, the looming figure of Ward was present even as Kovalev was in the process of moving on. Hours before the Main Events presser at the Renaissance Hotel in Manhattan, Ward announced he was retiring from the ring.

Of course, Kovalev (30-2-1, 26 knockouts) was asked about Ward, his rival’s retirement and the timing.

“I don’t care,” he said when asked whether he thought Ward’s timing was meant to upstage him.

All eyes will be on Kovalev to see whether he can actually bounce back from the losses, especially the rematch, in which he suffered a brutal eighth-round technical knockout. Ward won the first fight by a controversial decision.

And who will be in his corner? He and trainer John David Jackson split weeks ago in a messy divorce. Kovalev has chosen a new trainer, he said, but he isn’t ready just yet to tell us who it is. He said his camp starts Monday in California.

He indicated it isn’t Abel Sanchez, Gennady Golovkin’s trainer. And he said he’d probably not work with Ward’s trainer, Virgil Hunter, being that Hunter’s gym was home to a man for whom he has no fondness.

Shabranskyy also got some time at the mic. The Ukrainian spoke in solid English, thanking all for the opportunity. Ward had a larger presence than Shabranskyy in the room, however. Kovalev was asked several times about Ward, including one question about whether he’s disappointed that a third meeting wouldn’t materialize.

“I don’t think about Ward at all, I’m looking forward,” he said.

Kovalev said his rival’s retirement is “good for boxing” because it leaves his IBF, WBA and WBO light heavyweight titles vacant. Now, Kovalev said, more “interesting” boxers will be vying for major belts.

Main Events boss Kathy Duva, who promotes Kovalev, said it still isn’t easy to find people willing to fight Kovalev. Calls were made and calls weren’t returned, she said. But Golden Boy, Shabranskyy’s promoter, got back to Main Events within an hour when asked about his availability. That speaks to his character as an athlete, she said.

Kovalev is 34. Ward retired, he said, because his desire waned. Has Kovalev’s? After all, he’s been a pro since 2009 and has made enough money to be comfortable. Or is he recharged, as he insisted on Thursday?

Michael Woods is host of the Everlast-sponsored podcast “Talkbox.” He’s also a Board Member of the Boxing Writers Association of America, Publisher of NYFights.com and a blow-by-blow and color commentator for Facebook FIGHTNIGHT Live, Top Rank, DiBella Entertainment, EPIX, Fox Sports 1 and other outlets. He can be reached by cell phone at 718-619-5039 and followed on Twitter @Woodsy1069.