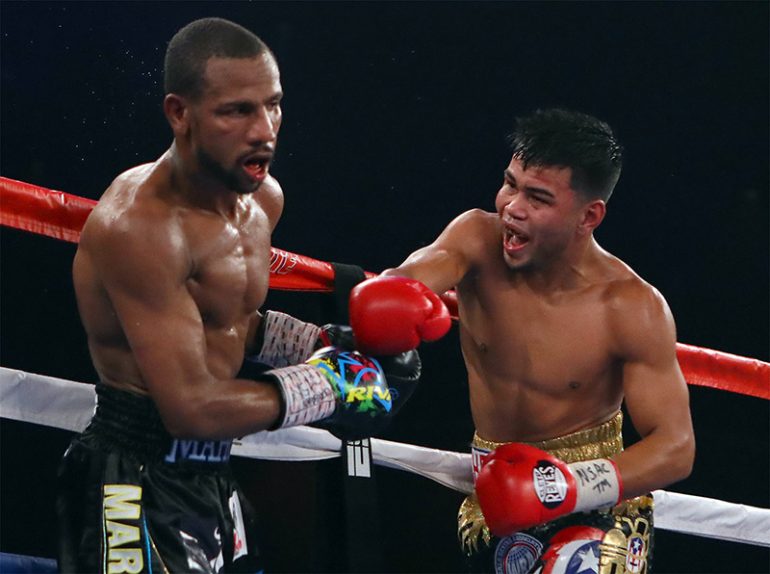 LAS VEGAS – Claudio Marrero (22-2, 16 knockouts) thought he was in control of a rough and rugged showdown with Jesus Rojas (26-1-2, 19 KOs) — until he wasn’t. After six physical rounds, Rojas captured an interim featherweight title by delivering a crushing combination that was punctuated by a vicious left hook that sank Marrero to the canvas for the 10-count in the seventh round of their Golden Boy on ESPN main event at the Marquee Ballroom at the MGM Grand Hotel and Casino.

The fight was an extreme clash of styles between the bullish Rojas and the finesse of Marrero that produced its fair share of fireworks. From the outset, it was evident that Marrero’s job was to tame Rojas’ all-out style by keeping him honest with crisp combinations while working much of the fight with his back against the ropes. As for Rojas, he sought to lay hands on his Dominican opponent by any means necessary and snuck in a few low blows and rabbit punches with the loaded hooks and power shots.

It appeared that Marrero was slowly taking control of the fight, as he was consistent with keeping his hands moving, and that the wind was slowly coming out of Rojas’ sails. Things picked up in the middle rounds as Rojas bulled his way forward and Marrero continued to snap off crisp combinations. But those combinations didn’t have much steam on them and Rojas continued to plow ahead in an effort to wear “The Matrix” down.

But a particularly entertaining sequence in the fifth round seemed to tip the scales in Marrero’s favor. It started with Marrero battling off the ropes in an effort to keep Rojas off him. But Rojas wouldn’t be denied and weathered the storm before delivering his own salvo of loaded punches. While Rojas’ shots had more power, Marrero’s came in bunches and eventually appeared to get the better of Rojas in a true back-and-forth round that showcased their opposing styles. Referee Russell Mora had his hands full but didn’t inject himself into the fight. 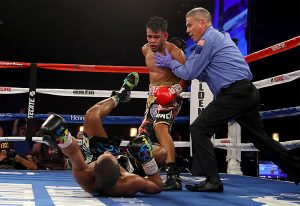 Rojas seemingly found a second wind in the seventh round and began to empty his gas tank. Marrero absorbed what he thought was left of his Puerto Rican foe and marched forward while jawing at his fading opponent. The Dominican mugged and danced when it appeared that he had the fight in control but he clearly underestimated what was to come.

With seconds left in the round, Rojas again bulled forward and fired a wicked three-punch combination that was capped off by a violent left hook that connected with Marrero’s jaw and sent him crashing to the canvas. Mora began the count but it was clear that Marrero’s goose was cooked in a shocking finish that was called at the 2:59 mark.

With the victory, Rojas has once again proved that his all-out blitz can pay dividends if his opponent is unable to find a way to settle him down.