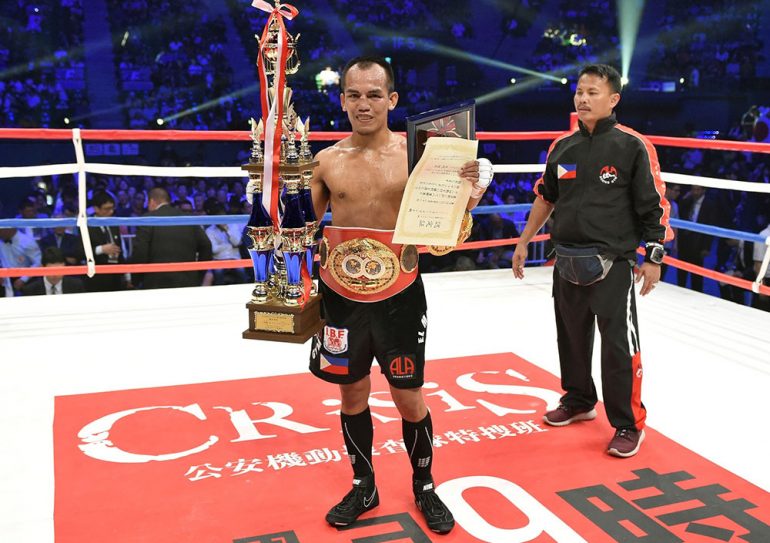 “He don’t know what he needs to do on fight night…because they only fight different styles, they don’t fight like my style,” said Melindo (36-2, 13 knockouts) of Budler’s past opponents.

Melindo will face Budler (31-2, 10 KOs) in the main event of ALA Promotions’ “Pinoy Pride 42” card this Saturday at the Waterfront Hotel and Casino in Cebu City, Philippines.

Budler, a former WBA strawweight titleholder from Johannesburg, South Africa, concedes that Melindo will likely be the best fighter he’s faced so far in his 10-year pro career.

“I think this is gonna be my hardest fight,” said Budler, a winner of two straight since a razor-thin points loss to Byron Rojas in May of 2016. “I don’t think he’s appreciated enough for his ability. In my eyes, he’s a great fighter. I think his counterpunching is absolutely brilliant and I think he’s got more power than his record suggests.”

Still, Budler, whose team paid out of pocket for an additional three nights to have 10 days to acclimate to the time difference, is confident he can win a world title in his second division.

“(Trainer Colin Nathan) has worked out a brilliant game plan, which we’ve worked into my mind. I don’t think whatever Milan does will counter the training we’ve done,” said Budler. “I’m super-ready, super-fit and I want to be a world champion again.”

The fight is Melindo’s first since sensationally lifting the title with a first round knockout of Akira Yaegashi last May. Few in his native Philippines got to see that fight live, as it was shown by ABS-CBN on a one-week delay, making the Budler fight effectively his coming-out party.

The 29-year-old from Cagayan de Oro City says, should he win, he’d like to target unification bouts with the three other titleholders in his division – Kosei Tanaka (WBO), Ryoichi Taguchi (WBA) and Ken Shiro (WBC) – to establish his own legacy in Philippine boxing history and stand out as more than just another fighter with a belt.

“I’m always hungry because I want a unification. I want the other belts. I want to become king in my division,” said Melindo, who is one of three current world titleholders in the Philippines.

“I can’t be like Manny Pacquiao. He is an eight-division champion. I can’t be like Donnie Nietes, longest Filipino world champion, and I can’t be like Nonito Donaire or even Brian Viloria. I want to make a name different from them. Because if you want to be a legend, you have to be a different way.”

First things first, he has to get business done against Budler.

“He’s a tough guy because he’s a world champion but I know I can handle him. Let’s see in the fight.”

The card will also feature the IBF junior bantamweight title eliminator between Johnriel Casimero and Jonas Sultan, plus Jason Pagara vs. James Onyango in a 10-round junior welterweight fight and Arthur Villanueva vs. Richie Mepranum in a 10-round bantamweight contest.