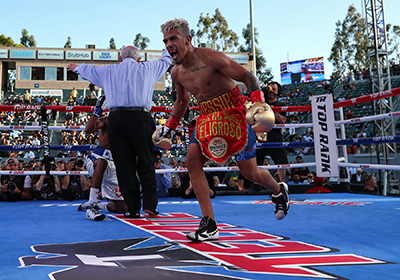 The next Top Rank on ESPN show is set for November 11.

Jessie Magdaleno will defend his WBO junior featherweight title against Cesar Juarez in the main event, but with the fight taking place in Fresno, California, the real attraction is Jose Ramirez.

The best talent on the card, though, will compete in the first fight. Artur Beterbiev, the crushing puncher from Russia, fights Enrico Koelling in the televised opener with the winner set to gain an IBF light heavyweight title shot.

“Jessie and Jose are going to light it up on November 11 because that’s the only way they know how to perform,” said Bob Arum. “Fresno is one of my favorite places to watch a fight because the fans are so great. And you can’t fight for a better cause than for the water rights of the Central Valley farmers. They are America!”

Magdaleno (25-0, 18 knockouts) topped Nonito Donaire in November 2016 to win the 122-pound strap, and then defended it with a second-round knockout of Adeilson Dos Santos in April. Juarez (20-5, 15 KOs), a rugged fighter from Mexico, has reeled off three consecutive wins since back-to-back losses (one of which was a decision to Donaire).

“Now that my first title defense is under my belt, I am even more inspired to work hard every day and remain a world champion,” said Magdaleno, who is rated No. 2 by THE RING at junior featherweight. “Juarez is not only my mandatory challenger, he is the next obstacle in establishing my legacy in the sport. I don’t go around obstacles. I go through them.”

Ramirez (20-0, 15 KOs) has looked good feasting on confidence-building opponents, as has Reed, but now Top Rank will find out which 140-pound prospect can graduate to contender status.

“I’m ready to show the world how hard I have worked and trained for this moment,” said Ramirez. “And to do it at home for my city — to bring awareness to our immigration issues and to get the Temperance Flat dam built for water storage, makes it that much more important to me.”

Beterbiev (11-0, 11 KOs), though, is the real fighter to watch on this card. He’s been inactive while fighting under the Premier Boxing Champions banner, but now that he’s linking up with Top Rank, he’s on the precipice of a title shot and ready to show he, not Sergey Kovalev or Oleksandr Gvozdyk, is the preeminent 175-pounder from Eastern Europe.