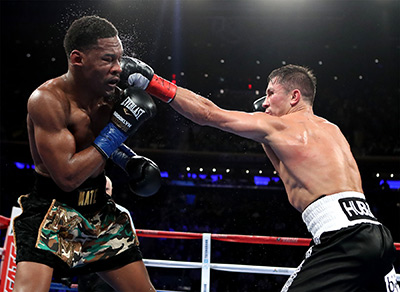 The last time we saw Canelo Alvarez and Gennady Golovkin in action, they had very different nights.

The Mexican star, of course, played with and punished Julio Cesar Chavez Jr. over 12 lopsided rounded in May. Two months earlier, GGG struggled with Daniel Jacobs (besides a fourth-round knockdown) and won via controversial unanimous decision. In fact, ringside media were split over who truly deserved the nod.

Is this an indicator of who might come out on top next Saturday iwhen Canelo and Golovkin finally square off for THE RING middleweight championship? Not if you ask GGG.

“I am not Julio César Chȧvez Jr. and Canelo is no Danny Jacobs,” Golovkin, an Olympic silver medalist, said. “There are no survivors in my fights. Boxing is a business. If I look great against Jacobs, if I knocked him out, I would not be getting this fight with Canelo now. Jacobs was a very good fighter and gave me good learning experience going 12 rounds. I have never done that before. I felt amazing going 12 rounds for the first time. Jacobs gives everyone problems.”

Canelo, on the other hand, is a stalking, power-punching fighter who, while quick, isn’t the kind of dynamic athlete that Jacobs is in the speed department.

Canelo also isn’t as fleet of foot. Simply put, Canelo and Jacobs fight out of two very different, effective styles, and no one should take too much from GGG’s struggles in that bout as they pertain to his chances vs. Alvarez.

“Danny Jacobs is the second-best middleweight in boxing,” said Golovkin’s trainer, Abel Sanchez. “It was a tough fight because the two best in the middleweight division were fighting each other. The matchup was as good in the ring as it was on paper. Jacobs also gamed the system by skipping the IBF’s mandatory fight day weigh-in where the fighters are only allowed to gain ten pounds from the previous day’s official weigh-in.

“Gennady, as defending champion, honored the IBF’s rule and weighed-in the next morning. Who knows how heavy Jacobs was the night of the fight? But even with that advantage Gennady was able to win. Jacobs was easily one weight division heavier than Gennady. Not getting the knockout may have been a double blessing for us. It showed that Gennady was capable of going twelve rounds with an elite fighter and it gave us the fight with Canelo.

“If Gennady had knocked Jacobs out there is no way Golden Boy would have the confidence to put Canelo in with us this year. Now let’s look at Canelo’s last fight. Chȧvez hasn’t fought under 167 pounds in five years. He was drained and barely threw a punch. If that same Chavez fights Gennady, there is no question Gennady knocks him out. Chȧvez was a sitting duck. There is no debate on who had the better win against the better opponent. Watching Canelo’s performance against Chȧvez gave us a lot of confidence, too.”