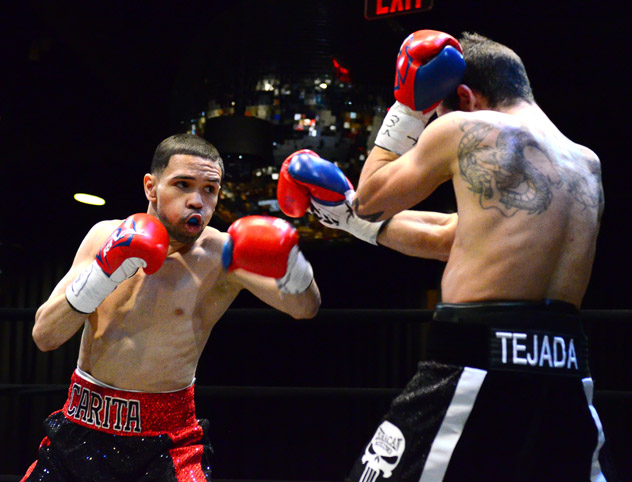 Naoya Inoue of Japan gets the rare chance to make an immense mark as an attraction when, on Saturday night, at StubHub Center, in Carson, California, he’ll rumble with Antonio Nieves, on HBO, which is presenting a “little guys” event that has the potential to elevate the Japanese boxer onto those pound-for-pound lists on which fans love to deliberate.

The buzz precedes Inoue (13-0, 11 knockouts) in a manner exceeding how this country usually looks at 115-pounders. We are a nation who likes super-sized everything but we will make exceptions for special talents, who are properly promoted.

Inoue, nicknamed “The Monster” because he wreaks carnage in violent fashion on foes, while having snagged light flyweight and junior bantam titles, is 24 years old.

He gets this opportunity maybe, partially, because his price is right and there is a shift in programming platforms, involving HBO and Top Rank. The HBO budget has been impacted by an ongoing merger situation, so their team has had to do more with less.

Thus, instead of middleweights and light heavyweights plying their trades, we get a bevy of “SuperFlys” attempting to prove that size doesn’t always matter, that they can deliver better bang for the buck and deserve acclaim, fame and super-sized paydays.

The WBO junior bantamweight titlist popped on more radars when, with a 7-0 mark, he took out 43-1-2 Omar Narvaez in 2014. His buzz built but, honestly, more so among the hardest of the hardcore, the “Team Stream” sorts who make a point to know time differences, and catch fights from Japan. There were negotiations which could have made a fight with Roman “Chocolatito” Gonzalez and Inoue but this country’s fight fans, at the time, might not have properly appreciated that bout, not having seen enough of Inoue. That will change Saturday, when he meets up with Nieves (17-1, 9 KOs) The Ohio-based boxer is 30 years old and comes in off a 10-round split decision loss, in March, to Nikolay Potapov.

“If he is Godzilla, I’m Megalon and we’re just gonna have to fight,” Nieves told me.

The underdog fought at 122, then 118, and tells me 115 isn’t a big deal. “It hasn’t been difficult at all to come down. I’m currently one or two pounds over, today (Tuesday). I haven’t missed a meal yet. I’m still hydrated and still drinking water. I feel good!”

Our friends Michael Rosenthal and Tom Gray, on the “Rabbit Punches” podcast, think Inoue will absolutely be too much for Nieves.

“Nieves, on paper, doesn’t look like he’s much of a threat, does he?,” Rosenthal remarked to Gray in the latest installment. “No, I mean, for start off, he’s 30 years old. He’s a pro for six years and this will be the first time he’s had to drain himself all the way to 115 pounds. That spells doom to me,” answered Gray.

Gray thinks the Japanese hitter will stop Nieves and that he might well be booked to give him a great chance at making a splashy impact.

Inoue’s most recent foe, Ricardo Rodriguez, can attest to impact. In round one, of their May tango, a left hook sent Rodriguez to the mat in the third. He rose, then Inoue dropped him again, with an even tighter, shorter left hook. The economy of motion didn’t lessen the impact a stitch. The fight before, Inoue snagged another stoppage, this time against countryman Kohei Kono. Inoue slid left and hurled a hook which sent Kono down, in round six. What, you think only my left can hurt you? Here’s my right, he said, while throwing combos and finishing Kono. Both Rodriguez and Kono had the look of someone who’d been walking, and an air conditioner dropped out of a window on their heads. Dazed. Confused. Pained.

As for being looked past, Nieves is understanding.

“A lot of people are looking past me but that’s OK with me because I have no pressure. According to them, I’m supposed to lose. (Inoue is) the one that needs to impress. He’s the one that has to live up to his hype. Pressure is all on him. All I have to say is it’s OK if they are looking past me. I’m coming to fight like I always do. I’m physically and mentally ready to put on a show and to show that my name should be with the top names in this division.”

You can subscribe to the print and digital editions of THE RING Magazine by clicking the banner or here. You can also order the current issue, which is on newsstands, or back issues from our subscribe page. On the cover this month: Canelo-Golovkin.