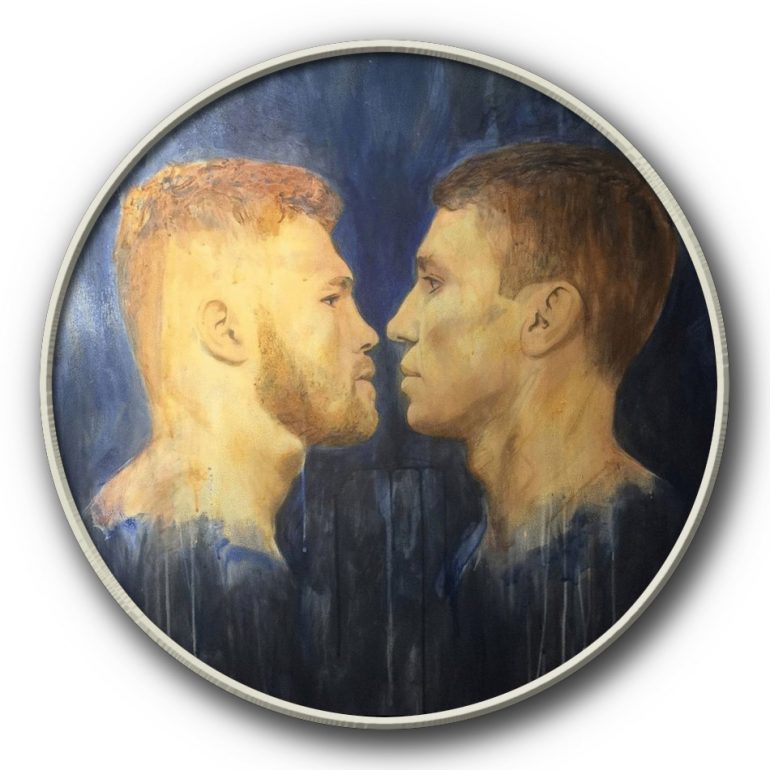 Vasyl Lomachenko’s legendary amateur credentials earned him a title shot in only his second professional bout, in 2014. He lost that fight to Orlando Salido, a less talented, less skilled fighter with no amateur background to speak of.

Salido, a near-20-year veteran of 55 bouts at the time, utilized every pro tactic and trick – legal and illegal – over 12 rough-and-tumble rounds, earning a split decision. However, Lomachenko, who compiled a sublime 396-1 amateur record, had enough grit and savvy to push the grizzled Mexican pressure-fighter to his limits.

The harsh lessons of that one title bout gave Lomachenko enough of a pro edge to outclass talented but largely untested former U.S. amateur star Gary Russell Jr. (24-0 at the time) in his very next fight, which was for a vacant belt.

The takeaway from Lomachenko’s title fights with Salido and Russell is that amateur experience is not the same thing as pro experience, but it obviously matters.

Exactly how much an extensive amateur career counts in a pro matchup is a question that will be intensely examined and debated in the final days before this year’s biggest boxing event: the middleweight championship showdown between Canelo Alvarez and Gennady Golovkin. 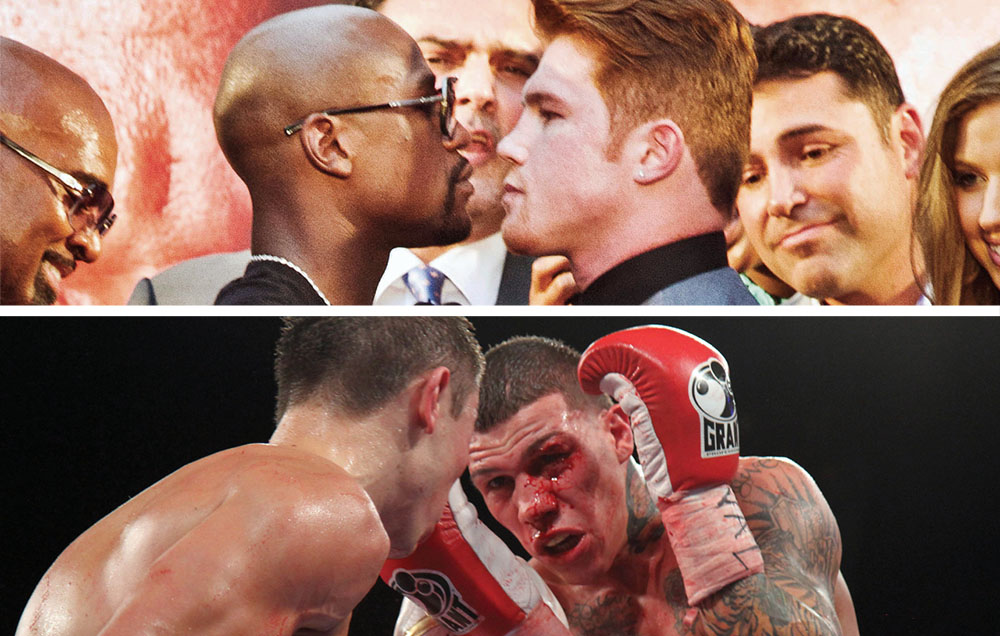 Golovkin (bottom left) was a seasoned fighter when he dismantled Gabriel Rosado in 2013. Canelo (top right) was still developing when he lost to Floyd Mayweather Jr. the same year.

However, the 27-year-old Mexican star has 14 more pro bouts and, perhaps more importantly, 181 more pro rounds than the 35-year-old hero of Kazakhstan.

Who has the edge? Oddsmakers have installed Golovkin as a slight betting favorite and most boxing insiders believe his amateur pedigree is an advantage over Alvarez.

“There is definitely an advantage gained from having so many amateur bouts before turning pro, especially at the high level that Golovkin was at,” said John Scully, a former U.S. amateur standout and pro light heavyweight contender.

“Of course, there are guys who were very good amateurs who didn’t win world titles and there are guys with limited amateur careers who became all-time greats, like Bernard Hopkins and James Toney. But I don’t see it as a coincidence that most of the elite boxers were decorated, if not elite-level amateurs.

“For every Bernard and James, you have dozens of guys on the other end of the spectrum, like Roy Jones Jr., Shane Mosley, Oscar De La Hoya, Evander Holyfield, Mike Tyson, Lennox Lewis, Virgil Hill, Mike McCallum, and on and on. The list is endless. Floyd Mayweather Jr., Zab Judah, Kostya Tszyu, Vernon Forrest, Michael Carbajal, Wladimir Klitschko, Anthony Joshua and literally too many others to list here.”

Scully, who has trained amateur and pro boxers after retiring – including former light heavyweight champ Chad Dawson – has a point. Three of the top five on THE RING’s pound-for-pound list – Andre Ward (No. 1), Golovkin (No. 2) and Lomachenko (No. 5) – were elite amateurs.

“They become accustomed to so many different styles and sizes and situations as amateurs at that level that when they turn professional they have already been tested, especially mentally, on so many different aspects of the game,” Scully said.

LEARNING ON THE JOB

Here are 10 accomplished fighters who proved one can succeed with little to no amateur background. 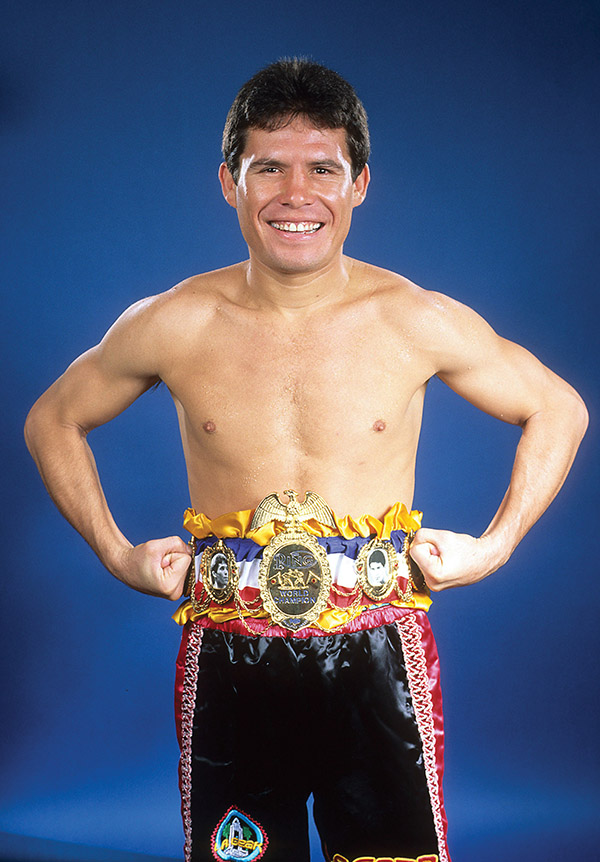 CIRCA 1990: Julio Cesar Chavez poses with the RING belt. (Photo by THE RING)

RICARDO LOPEZ
The best little man of his time

JUAN MANUEL MARQUEZ
One of his era’s cleverest boxers

Abel Sanchez, the veteran trainer who has guided Golovkin’s pro development for the past seven years, echoes Scully’s opinion when assessing his star fighter’s ability to absorb his teachings and having the upper hand against Alvarez.

“Gennady was a guy that I wasn’t confusing when I asked him to do something,” Sanchez told THE RING. “He already had the foundation, thanks to the Kazakhstani (amateur) system, so it was easy for him to adapt to what I showed him in the gym.

“From his perspective, he can always fall back on that (amateur experience) if what I’m doing with him doesn’t work (in the ring).

“It’s an advantage over Canelo, not because of skills, but because of situations,” Sanchez continued. “Gennady had been in every situation imaginable, he’s experienced every style and boxer type – tall guys, short guys, righthanders, lefthanders, movers, punchers – so he can kind of, on the fly, adapt during a fight.”

‘(Golovkin) already had the foundation, thanks to the
Kazakhstani (amateur) system, so it was easy for him
to adapt to what I showed him in the gym.’

Rudy Hernandez, a former pro boxer who has worked corners for four decades, agrees that amateur experience is important but he believes that instruction a boxer receives in the gym is far more integral to his or her professional development and success.

“Amateur boxing is a great experience for those who want to pursue a professional career,” said Hernandez, who trained his brother, Genaro Hernandez, a former two-time junior lightweight titleholder who only had three amateur bouts.

“If professional boxing is something you think you want to do, then you want as much amateur experience as you can get between the ages of 10 and 18. I think it’s an advantage for Golovkin having all that amateur experience, but he was also taught right. There must have been some good amateur trainers, maybe from Russia or the old Soviet system, training him in Kazakhstan because he was taught how to punch right.

“There are trainers here in the U.S. at the amateur level who are only as good as the fighters they train. Nobody makes a fighter or makes a fighter good. The fighter has to be born good. A good trainer can make him better.”

In other words, Golovkin, a born fighter if ever there was one, was given a solid technical foundation during his amateur upbringing that professional trainers can build on. However, Hernandez says it’s clear that Alvarez was also born to fight and he believes the Guadalajara native, who turned pro at 15, received a technical foundation comparable to Golovkin’s during his late teens.

“Canelo didn’t have much amateur experience but he grew up in a quality gym and he trained with some really good fighters and he learned his craft,” said Hernandez, who sees some similarities between Alvarez and his late brother.

“Genaro only had three amateur bouts, and he lost two of them. But he started boxing when he was 9. He was always in the gym, watching me and other professionals train, sparring with us and learning from us. When Genaro was 15 or 16, he sparred with Azumah Nelson and he did really well. He sparred with Ruben Castillo, the No. 1 junior lightweight in the world at the time, when he was 16.”

So while Genaro Hernandez missed having the prolonged amateur career during his teen years that most future pros need to succeed, he gained quality – arguably more valuable – pro experience in the competitive boxing gyms of Los Angeles.

Fighters generally don’t pick up the power Canelo (right, stopping James Kirkland) and Golovkin (left, doing the same to Dominic Wade) have. They’re born with it.

Reynoso recognized that the 14- and 15-year-old Alvarez received better boxing experience in his Guadalajara gym – which was home to two world titleholders, Oscar Larios and Javier Jauregui – than he did in any amateur bout and made the decision to turn his young pupil pro.

“Canelo was sparring with world champions, ‘Chololo’ Larios, ‘Chatito’ Jauregui, even once with Marco Antonio Barrera, and doing well by the time he was 15; that’s when we knew he was ready to turn pro,” Reynoso told THE RING.

“Canelo started so young, fighting as an amateur during his pre-teens, but became a pro right away at age 15. And he’s been fighting men his whole life,” Avila said. “He learned how to fight grown men and he survived.

“Nobody beat him until he met Floyd Mayweather Jr. And it took a slick guy to beat him.”

Writer and broadcaster Steve Kim, who has followed the careers of Alvarez and Golovkin closely, believes that Alvarez has gotten better since his only loss, the majority decision to Mayweather in 2013, a factor that should be considered going into the Golovkin fight.

“Canelo has evolved and improved since the loss to Mayweather, a fight that he probably wasn’t ready for,” Kim told THE RING. “But since that point we’ve seen steady growth, technically and physically.”

However, Alvarez’s win streak also includes impressive decisions over technical master Erislandy Lara, a former world amateur champ who remains a top junior middleweight titleholder, and future Hall of Famer Miguel Cotto, from whom he lifted THE RING middleweight championship, which put him on a collision course with unified 160-pound beltholder Golovkin. He’s clearly benefitted from the quality rounds.

“You can see the confidence he exudes,” said Kim. “There’s a mastery of technique and fundamentals that may not have been there in the past. He’s actually added elements to his game.”

‘As a team, we have built Canelo since he was
13 years old and to have him at this level, 14 years
later, means that we did things right.’

Alvarez’s co-trainer (and Chepo’s son), Eddy Reynoso, says the years of sparring with seasoned pros at an early age and his first 20-30 pro fights basically served as Alvarez’s amateur career. The championship fights he’s had in recent years have prepared him for arguably his greatest challenge – Golovkin.

“As a team, we have built Canelo since he was 13 years old and to have him at this level, 14 years later, means that we did things right,” the younger Reynoso said. “Canelo has defeated great fighters like Cotto, Austin Trout and Lara. But we still have to beat fighters like Golovkin who swept through a whole division.”

Golovkin does not have future Hall of Famers on his resume as Alvarez does, but he’s more accomplished at middleweight, where his title reign has stretched for nearly seven years and during which time he has defeated eight RING-rated contenders (seven by knockout). Even Alvarez’s most ardent supporters admit that he will have his hands full with Golovkin.

Which brings us back to the question of whether a fighter with a limited amateur background can be developed into an elite boxer and compete with a former elite amateur. The answer is sometimes, if that fighter is very special.

“Boxing is a very complex game and there is no guaranteed formula for success,” Scully said. “Every boxer is an individual and his success will vary by a certain amount of degrees depending on many different factors. The amount of solid amateur experience more often than not plays a role in many ways, but there are also things like professional technique, innate mental toughness, heart and discipline that can be nurtured or cultivated in the gym with great sparring and a very, very astute coach, if not in the amateur ring.

“Every now and then you get a kid with the unusual ability to absorb lessons from a coach, and if he has the physical attributes and the mindset to carry it all out, you make a top fighter out of a guy without many amateur fights. It’s obvious that Canelo is one of those guys.

MORE CANELO-GGG FEATURES FROM THE RING:

Canelo Alvarez: The different one

This article first appeared in the November 2017 of THE RING Magazine. THE RING, boxing’s foremost publication since 1922, contains in-depth features and commentary from some of the sport’s top writers. You can get the digital edition of the magazine as part of our new Ringside Ticket package by subscribing here. 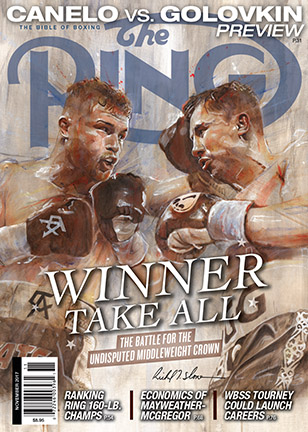