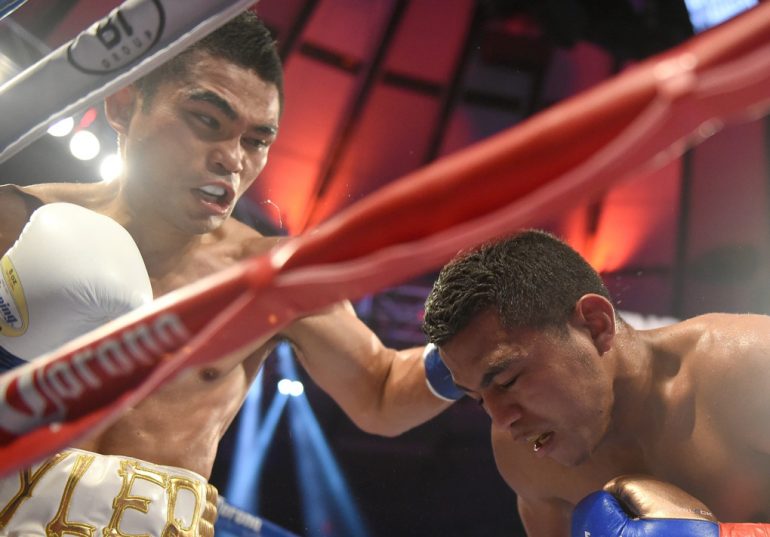 Viloria (left) in action against Roman Gonzalez in 2015. Photo by Naoki Fukuda
05
Sep
by Francisco Salazar

The Viloria-Cartagena bout will take place on what many regard as the best fight card of 2017. The ‘Superfly’ show features Naoya Inoue’s U.S. debut, Juan Francisco Estrada versus Carlos Cuadras and, in the main event, a rematch between Wisaksil Wangek and Roman Gonzalez.

Viloria (37-5, 22 knockouts), who resides in Waipahu, Hawaii and trains in the Los Angeles area, has fought a who’s who of fighters at 108 and 112 pounds, including Omar Romero, Edgar Sosa, Ulises Solis, Giovani Segura, and Hernan Marquez.

In October of 2015, Viloria squared off against Gonzalez, who was then the best pound-for-pound fighter in the world but, despite a valiant effort, he was stopped in the ninth round.

The 36-year-old Viloria took some away from the ring after being released from his promotional contract by Top Rank. He returned on March 2, winning an eight-round unanimous decision over Ruben Montoya.

Originally from Philadelphia, Cartagena has lost to contenders Ricardo Rodriguez and Emmanuel Rodriguez. His best victory to date was a first-round stoppage of former contender Jobert Alvarez in July of last year.