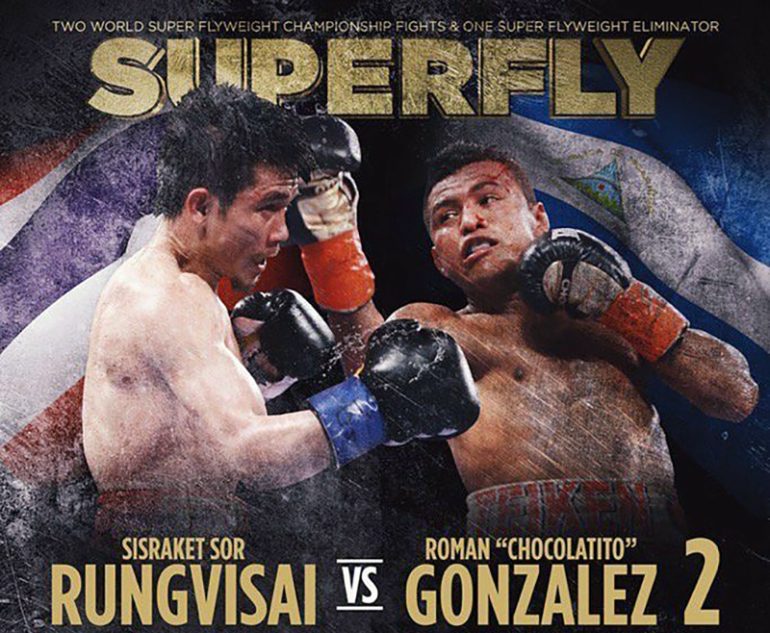 Roman Gonzalez is looking to regain his WBC 115-pound title from Wisaksil Wangek (AKA Srisaket Sor Rungvisai) on Saturday in the headlining bout of a HBO tripleheader dubbed “SuperFly” at the StubHub Center in Carson, California.

The former Pound-for-Pound king is eager to gain a measure of revenge over his Thai opponent, who upset him by majority decision in March, but he expects another tough encounter.

“The rematch with Rungvisai is the most important task in my life right now,” Gonzalez told RingTV.com through manager Carlos Blandon. “I want to thank Teiken Promotions, JBO, WBC, and K2 for giving me this opportunity to be able to fight for my old title. 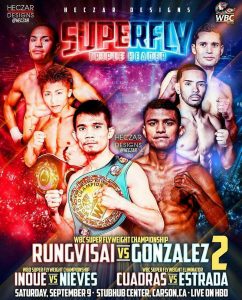 “I know this will be a hard fight but I am training like I have never before and with my new coaches and the supervision of Mr. Honda, I believe I will win this fight, God willing.”

As well as the Wangek-Gonzalez rematch, the eagerly anticipated Sept. 9 promotion has a stacked undercard featuring former Gonzalez rivals, Carlos Cuadras and Juan Estrada meeting in a WBC 115-pound eliminator. Both men hope that a victory will earn a second meeting with Gonzalez, if he’s successful in the main event.

The third bout on the telecast in the talent laden 115-pound division (known as the super flyweight class, hence the “SuperFly” title to this show, but usually called junior bantamweight in the U.S. and by THE RING magazine) will see Naoya Inoue make his long-awaited U.S. debut, defending his WBO strap against Antonio Nieves.

“I feel blessed to be part of the best of the best of my division in this card,” Gonzalez said. “It is an honor to share ring with some of the greatest. I feel each of them are excellent fighters that I respect and admire. 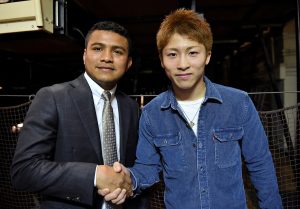 “I would definitely like to fight all the three of them, but Inoue, since I have not fought before is definitely who I am inclined more to fight, but for now I have to win Sept. 9, therefore I am training and always praying.”

“Chocolatito” gives credit to Srisaket for their first meeting but believes he should still be undefeated and is using the loss to fuel his desire.

“I believe that fight was a very difficult fight, but I feel I won the fight,” he said. “So it gives me a lot of motivation to keep doing what I do in training camp. This loss showed me a lot and I have faith that God will give me my title back, but before that happens I have to keep training as the challenger I am.”

Since the surprise loss Gonzalez has enjoyed some down time.

“I rested in Nicaragua and let all the wounds from my battle with Rungvisai heal in order to get back in the gym and not have any problems in the upcoming rematch,” he explained.

Tragically last year his long-time trainer Arnulfo Obando passed away. Gonzalez was deeply saddened to lose the father-like figure from not just his corner but also his life.

Obando was key to Gonzalez early development alongside the greatest of all Nicaraguan fighters, Alexis Arguello. Gonzalez is quick to praise both.

“Everyday that passes I pray for his soul as well as for Alexis Arguello’s soul,” said the deeply religious Gonzalez. “Both have been my trainers and have left to heaven before myself.

“I feel blessed to have had them in my corner and to have been taught by the best. Now I fight with their knowledge and believe with God’s help we will showcase what I am made of.”

For the first Srisaket bout “Chocolatito” trained with his father, however, this time he decamped to Tokyo and began training on July 17 under the watchful eye of Sendai Tanaka, noted for his work with Marco Antonio Barrera and a host of Japanese standouts.

Alongside Tanaka – who was Gonzalez’s chief second when he won his first world title in 2008 – he has been working with strength and conditioning coach, Nakamura San of the B.E.A.T gym.

For now Gonzalez will have his hands full with Srisaket but his manager, Blandon, is exploring options for the future, including a possible homecoming.

“This is one of Roman’s dreams and maybe someday we can fulfill this dream,” stated the manager.

“I believe in 2018 we can pull off two or three fights. Inoue is a name as well as ‘Gallo’ [Estrada] and Cuadras that we would like to have Roman fight. I believe this division is full of good competition and I feel as if its going to be great fight after great fight.”