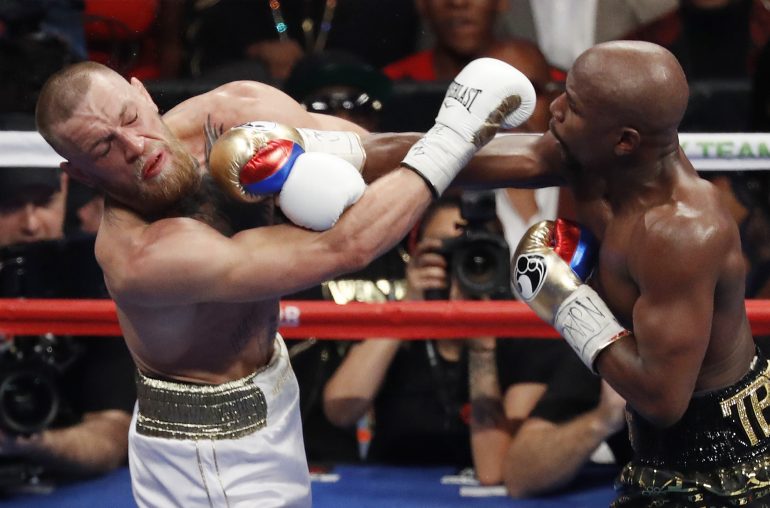 Mayweather professed to the non-believers that he would finish the Irish UFC star inside the distance and make up for his dull affair with Manny Pacquiao in the last superfight that captured the imagination. And he delivered on his word, although that’s no surprise considering the spectacle matched an all-time great boxer, albeit a 40-year-old one, against a UFC champion making his pro boxing debut.

McGregor actually performed well early in the junior middleweight bout. The 29-year-old’s awkward southpaw style, superior range and size, and use of angles all helped him win the first three rounds on one official scorecard, as well as THE RING’s.

But soon, as he always does, Mayweather took over. After dishing out a severe beating over the last three rounds, he finally finished the show with a series of flush punches that wobbled McGregor and prompted referee Robert Byrd to halt the contest at 1:05 of Round 10.

“I guaranteed to everybody that this wouldn’t go the distance. Boxing’s reputation was on the line,” an exuberant and emotional Mayweather said. “ … He’s a tough competitor and I think we gave the fans what they wanted to see. I owed the fans for the Pacquiao fight. I had to come straight forward and give the fans a show, and that’s what I did.”

Mayweather (50-0, 27 knockouts) fought in a swarming, pressure style over the final six rounds, a stark departure from his trademark counter-punching form. McGregor even joked that he “turned him into a Mexican tonight! He fought like a Mexican.”

That was much to the delight of fans, who watched Mayweather trudge through 12 tedious rounds with Pacquiao in 2015 in an event that shattered revenue records. It’s possible those marks will all fall to Mayweather-McGregor, though, an event that intrigued sports fans everywhere.

“Money” ended a two-year retirement and earned a guaranteed $100 million, though he figures to take home in excess of $250 million when the pay-per-view buys, priced at $89.95 and $99.95, and other revenue streams are all calculated. McGregor, the UFC champion, raked in a career-high payday of $30 million guaranteed and also will make a percentage of the profits.

“He’s composed. He’s not that fast, he’s not that powerful, but boy is he composed in there,” said McGregor, who leaned over the top rope and shrugged his shoulders to his fans moments after the stoppage as if to say, “I did my best.”

The bout was lambasted from the moment it was first mentioned in 2016. And the criticism crashed down in waves when it was finalized in mid-June. McGregor was no joke, though, as he held his own — for a while, at least.

But Mayweather says that was part of his strategy, one his father, Floyd Sr., and he concocted at the Las Vegas gym Junior owns. The plan was to let McGregor fire off his heavy shots over the first three rounds in hopes he would fatigue — McGregor has only been the five-round distance in a UFC fight only once — before finishing the 29-year-old down the stretch.

“We do all foolish things, but I’m not a damn fool,” Mayweather said of his decision to end his retirement. “If I see an opportunity to make $300 (million), $350 million in 36 minutes, why not? I had a great career. I can’t complain about anything.”

McGregor began the fight furiously, but there was little snap on his wide punches.

Soon, McGregor, mouth agape from fatigue, was a sitting duck and couldn’t escape Mayweather’s power shots. All he could muster was a tongue out at Floyd, who continued to connect with clean power shots.

The partisan crowd of 14,623 at T-Mobile Arena — well short of a sell-out — tried to urge their man on with chants of “Ole” and “Conor” but all McGregor could do was wrestle Mayweather and clobber him on the back of the head as Byrd attempted to separate the men.

Mayweather gave McGregor an absolute shellacking in Round 9, and “The Notorious One” wobbled and held on for dear life.

Following a minute respite, Mayweather measured McGregor, beaten and swollen, and had the fighter flailing around the ring when he landed a barrage along the ropes that concluded the fight and Mayweather’s career.

“I have to give it to him, that’s what 50 pro fights will do for you,” said McGregor, who expected to add more than 15 pounds to his 153-pound frame following Friday’s weigh-in. Meanwhile, Mayweather, who weighed in at 149.5 pounds Friday, typically gains little weight before the fight.

“I thought I took the early rounds pretty handily,” McGregor said. “He had to change his style, and he adjusted. He’s composed. He’s not that fast, he’s not that powerful, but boy is he composed. He was patient with his shots. He’s had a great career.

“What can I say? I had a bit of fun and hopefully entertained the fans.”

McGregor can hold his head high after a surprisingly competent performance. After all, he was a fighter making his pro debut against an all-time great. And McGregor made life-changing money for the opportunity.

In the end, though, he was no match for Mayweather, who will now ride off into the sunset a perfect 50-0, surpassing all-time great heavyweight Rocky Marciano’s retirement mark of 49-0.

“Rocky Marciano is a legend and I look forward to going into the Hall of Fame one day,” said Mayweather, who captured titles in five weight classes during his storied career. “This was my last fight tonight, ladies and gentleman. Tonight was my last fight for sure.”

Mayweather and McGregor created massive demand for the crossover bout during a four-city press tour that spanned three countries in July. The news conferences, more circus than news event, contained racial and homophobic slurs and dragged the sport through the mud.

The fight was condemned by many. But in the end, it was a lot better than expected. And boxing, thankfully, wasn’t embarrassed on Saturday.

That was certainly more than anyone could ask for following a fight — and promotion — that was considered more spectacle than sport.

“One thing I know I can do: I can fight,” Mayweather said.

Mayweather did it better than anyone else for 21 years. It’s the end of an era — a generation — and now it’s time for a new fighter to take the throne as the face of boxing.