Conor McGregor is confident he can crack the Mayweather code 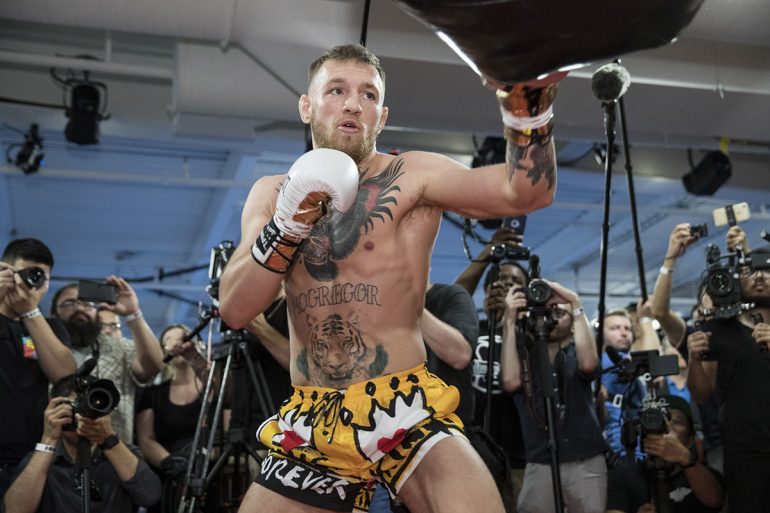 For two decades, no professional boxer has been able to crack the code of Floyd Mayweather and his impeccable defense that is recognized by many as the best in the history of the sport. You know that Mayweather’s ability to avoid damage is special when you can count, on one hand, the number of times that Mayweather has been hurt in a fight. That’s not an exaggeration, either.

But none of that matters to Conor McGregor.

The UFC lightweight champion, who will step in the boxing ring for the first time as a professional on Saturday, exudes confidence and believes he has the cheat code that will unlock Mayweather’s vaunted shoulder roll.

“I know exactly how I’m going to crack that code,” McGregor told RingTV.com shortly after his arrival on Tuesday. “I will show it, then I will say it.” 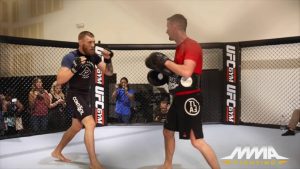 McGregor moving on up in a bid to secure the lightweight title.

This is nothing new from McGregor, who has managed to call his shot in several UFC fights over the course of his career. Those who immediately attempt to discredit McGregor should understand that he’s a student of the game and spends countless hours studying his opponents tendencies before making his prediction. Obviously, boxing is a new world for McGregor but that hasn’t rattled his confidence one bit.

“I don’t care about his defensive capabilities but I have watched how other boxers attack him and how it changes from the early part to the later part of the fight,” he continued. “I know exactly how to break him down. I will show that and we can talk about it at the press conference.”

As far as the result is concerned, to the Irishman, it was never in doubt.

“I believe I’ll knock him out early,” McGregor said in regards to facing the undefeated fighter who has only officially touched the canvas once in his career. “One or two rounds and he’s done. If he recovers from being knocked down, I’ll toy with him. But I will have the ability to put him away in two rounds.”