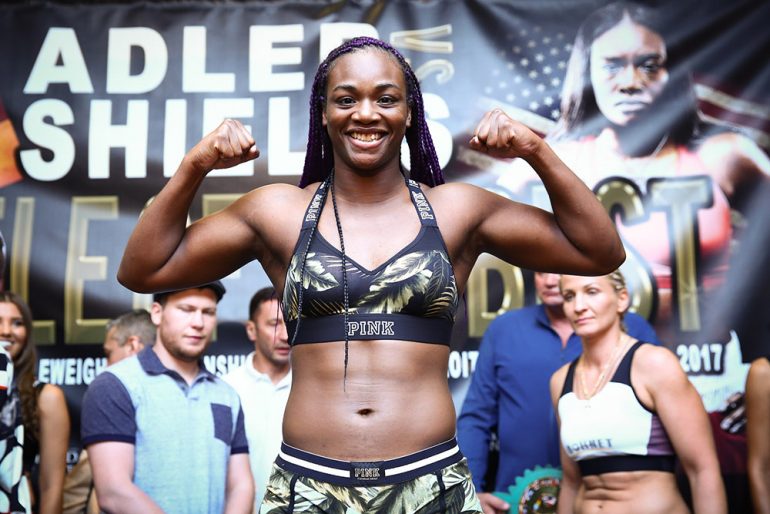 August must be Olympic hero Claressa Shields’ favorite month on the calendar. After being the first American boxer, male or female, to win back-to-back Olympic gold medals in August 2016, it’s only fitting that she won her first world title(s) a year later on Friday.

Shields (4-0, 2 knockouts) easily dominated a deer-in-headlights-looking Nikki Adler (16-1, 9 KOs) by 5th-round TKO to take her WBC super middleweight title as well as the vacant IBF belt. The official time of the stoppage was 1:34.

In what amounted to be an absolute blowout from the start, the 22-year-old Shields outclassed Adler, who made the trek from Germany to defend her title at the MGM Grand Detroit, which is roughly an hour from Shields’ home in Flint, Michigan.

Shields looked as sharp as she has in her first four bouts, coming out in the first round with searing combinations to blind Adler and paralyze the German champion. Shields was able to wobble Adler with a jab and then back her up to the ropes to dictate the action. Adler’s face started to show red bruises from the stinging left and right hooks.

Shields followed in the second round by throwing over 70 punches, landing half of them and punctuating the round with a massive left hook that sent Adler into the ropes. Adler didn’t land a single punch through the first two rounds.

Shields took her time in the third round. She began measuring her punches and stopped short of overthrowing as she has done in her first three pro bouts. At the end of the round, Adler lowered her head and walk back to her corner, ever so slowly displaying the body language of a defeated fighter.

Shields gave Adler a chance to recover in the fourth and the 30-year-old German boxer started to move around better and even attempted to hold Shields when then Michigan native came close. Shields then landing a bruising body shot and followed back upstairs to hurt Adler again. Shields then stalked Adler to the ropes and unleashed an eight-punch combination that had Adler in serious trouble.

Referee Michael Griffin checked on Adler after the second and fourth rounds, asking her to show him something or he would be forced to put an end to the beating. Shields shortened up her combinations in the fifth round and started going to the body. When Adler lowered her gloves for a moment, she was rocked by a crushing left hook upstairs. As Adler tried to stay on her feet, Shields came in for the kill, landing two more left hooks that caused Griffin to jump in and stop the fight without any argument from Adler or her corner.

This was Shields’ first scheduled 10-round bout and she is now the fastest woman to ever win a world title. It’s only the latest in a series of extraordinary feats, including being the first female boxer to ever headline a main event card on premium cable when she defeated Szilvia Szabados, also at the MGM Grand Detroit. Adler defeated Szabados back in 2015 to win the belt that Shields now owns.

The bout was Shields’ third with promoter Dmitriy Salita, who vowed to get Shields her first world title shot within the year. Seated at ringside to witness the bout was the unified 160-pound world champion Christina Hammer, who climbed into the ring with her own belts to congratulate Shields, but also to warn the American that she would not have as easy a time with her as she did with fellow German Adler.

Before getting into a short war of words with Hammer, Shields told the crowd winning the world titles feels better than her two Olympic gold medals because her friends and family can actually see her fight live in Detroit instead of traveling to London in 2012 and Brazil in 2016. Shields also liked the part about being paid as a professional as she grinned from ear to ear. 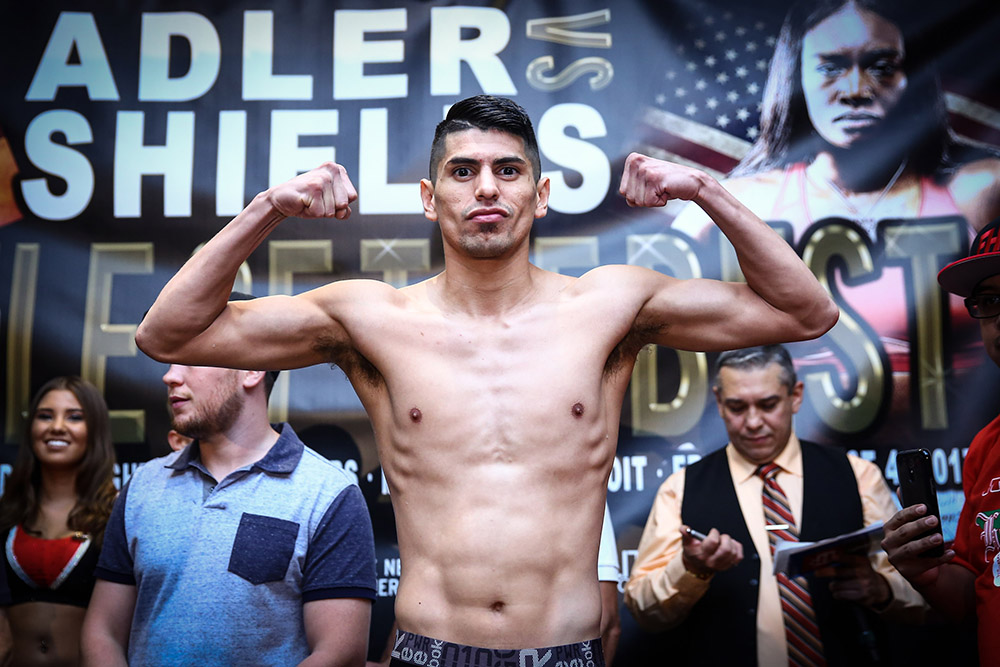 Making his first appearance in the United States, Tikhonov took a hard right hand by Hernandez to end the third round and never fully recovered. Hernandez landed big body shots in the fourth round, causing the 27-year-old Russian to retreat. Standing on unsteady legs, Tikhonov had no chance to avoid the clean shots from Hernandez and barely escaped the fourth round.

Tikhonov received a warning for lunging with his head when he caught Hernandez with a butt that opened up a gash on the top of his head. Hernandez, fighting in a southpaw stance to match Tikhonov’s, landed multiple clean right hands that snapped Tikhonov’s head backwards. After the fourth clean shot, the referee jumped in to save Tikhonov and called an end to the bout. Hernandez landed 45 percent of his power shots, according to CompuBox.

Hernandez first turned pro in 2009 and after only two bouts stopped boxing to work construction full-time to support his family, but resumed his career in 2014.