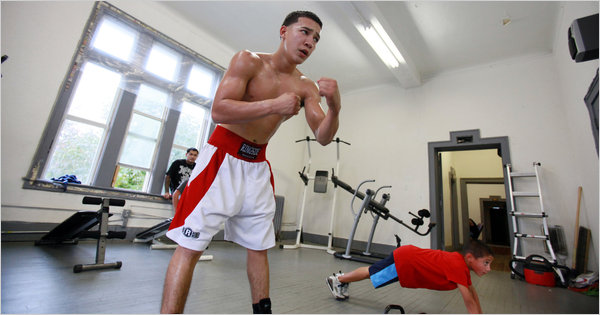 The eyes of the boxing world will be on Vasyl Lomachenko when he defends his WBO junior lightweight title against Miguel Marriaga on Saturday, but another 130 pounder, Erick De Leon, hopes to make an impression on the undercard.

De Leon (16-0, 11 knockouts) is keen to make the most of his opportunity, fighting on such a big card at Microsoft Theater in Los Angeles, when he faces Adones Aguelo.

“I’m very excited to be fighting on such a big undercard, Lomachenko’s a great fighter,” De Leon told RingTV.com. “I can not wait to show my skills and talent on August 5.

His opponent, Aguelo, has had 45 fights, going 28-15-2 (with 19 KOs) but the Filipino veteran is usually durable and has only been stopped on three occasions.

De Leon is acutely aware of what Aguelo brings to their contest.

“He’s a veteran, he’s a tough fighter, he likes to fight,” he said. “He has a lot of fights but we’ve been training very hard and we have a lot of experience too.”

While not all fighters do, De Leon see’s boxing as a full time vocation.

To prepare himself, he left his Detroit home and traveled to Toledo, Ohio to spar with IBF lightweight belt holder Robert Easter Jr.

“He’s a good friend of mine, he’s a tremendous fighter, great skills,” he said of Easter. “We were in training in Toledo, Ohio before I came to camp. We were sparring with him for four to five weeks. It was great work, I learned a lot too.”

At the conclusion of their sparring, De Leon headed for Riverside, California, to officially begin camp and link up his trainer Robert Garcia at the RGBA (Robert Garcia Boxing Academy).

“We’ve been training very hard, every day you get up at 6 a.m., every day you run up hills, you do sprints, strength and conditioning,” he explained. “We’ve trained very hard. I’ve sparred tough opponents, they’re up-and-coming undefeated prospects as well. We pushed our body to the limit.

“We’re getting more experience, my body’s developing and getting stronger. Every camp I feel stronger, the sparring competition is getting better, every camp is I’m learning more and more. I’ve been making little adjustments with Robert Garcia and learning with him. He’s a great trainer. I have my father, Luciano, and my trainer from back home, Nelson Figueroa, so it’s a great team. We’re on our way to the top, we’re working very hard, we’re very hungry.”

On this occasion, De Leon, didn’t spar with three-division titleholder Mikey Garcia because of his southpaw stance. However, the pair have sparred countless times in the past.

The 25-year-old has also shared sparred with the likes of Lomachenko, Abner Mares and Jessie Vargas.

Those experiences have clearly helped bring on De Leon as a prizefighter. He feels he’s close to making his move in the talent laden junior lightweight division.

“I’m right there,” he said. “It’s whatever my manager Cameron Dunkin says. If it was up to me I’d fight 10 rounds. I hope my next fight is 10 rounds but I’m a few fights away I’ll be ready for a 12-round fight.

“Step-by-step, whatever, Cameron, Robert and Top Rank have in-store for me, I just want to fight the best. I want to prove to everybody who Erick De Leon is and what I’m capable of doing.”

Dunkin has one of the best eyes for talent in boxing. He’s managed 34 world champions during his time in the sport and has little doubt that De Leon could add himself to that list.

“He has all the talent in the world,” said the veteran manager. “He’s really come on this past year, he looks a real top prospect now. I’m very pleased with how he’s developed.

“Hopefully, he does the job Saturday and then we’ll look to step him up later this year and get him a regional title fight which would get him ranked and then we can look to make our move with him. I definitely think he has the potential to win a world title.”