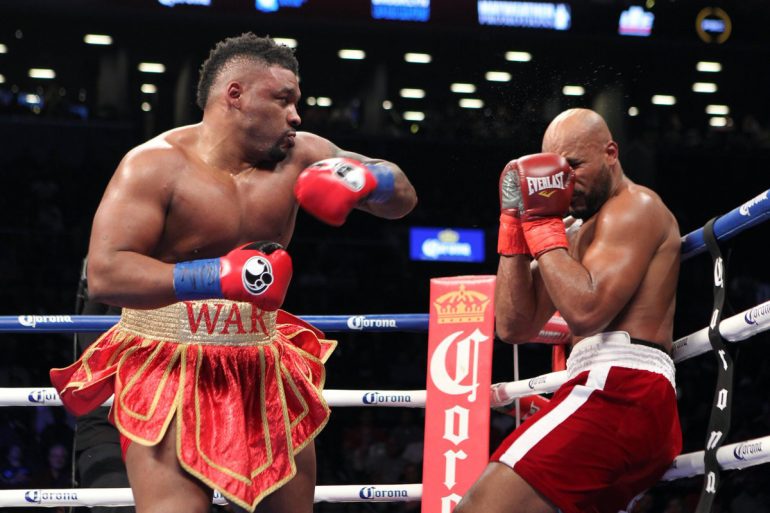 NEW YORK — Add another player to the burgeoning heavyweight division, and with his gift for gab, we could have a star on our hands if he continues to develop.

Jarrell “Big Baby Miller showed off a tremendous workrate, even at 298.5 pounds, and battered former heavyweight title challenger Gerald Washington on Saturday before his hometown fans in Brooklyn until the corner stopped their charge from coming out for the ninth round.

Miller, who was coming off an 11-month layoff amid promotional issues with Dmitry Salita, no doubt needs more seasoning, but the skillset is there.

“I definitely felt the ring rust. Gerald was very tough,” Miller, 29, said. “It was a very good fight that had me thinking. My power was there, but I couldn’t put it together the way I wanted to today.

“I took the hard way back coming in off of a layoff. Gerald definitely pushed me and motivated me. I had to rely on my brain and my power.

He didn’t just wing fight-ending bombs — the former kickboxer patiently set up his shots but never stopped plowing forward. Miller (19-0-1, 17 knockouts) also survived a very rocky moment in the beginning of Round 5, when Washington (18-2-1, 12 KOs) buckled him with a series of shots and landed about 15 unanswered shots, but couldn’t put the big man down.

By the end of the round, Miller was walking Washington down with his own big shots, and even had the former USC football player in some trouble.

From that point on, it was all “Big Baby,” who landed plenty of big right hands to the body and snapped Washington’s head back with effective combination punching.

There’s a lot to like from Miller: he possesses good head- and upper body-movement, an exciting pressure style and puts together punches in bunches.

“Big Baby talks a big game and he backs it up,” said Stephen Espinoza, the head of Showtime Sports. The network televised the heavyweight scrap on their social media platforms. Gerald Washington is proven at the championship level, it’s a good measuring stick for him, and we’ll probably see him on Showtime Championship Boxing in the near future.”

Of course, the 6-foot-4 Miller needs far more seasoning with just 20 pro fights under his belt. Washington, who was stopped by Deontay Wilder in five rounds a few months ago, was by far Miller’s best opponent, and he needs even better opponents to develop.

More so, he needs to stay active, and probably needs to drop a few pounds, although his stamina appeared to be incredible for such a large guy.

But with his unique charisma, look and thirst for the big stage, Miller could be the next American heavyweight star if he continues to put in the work.