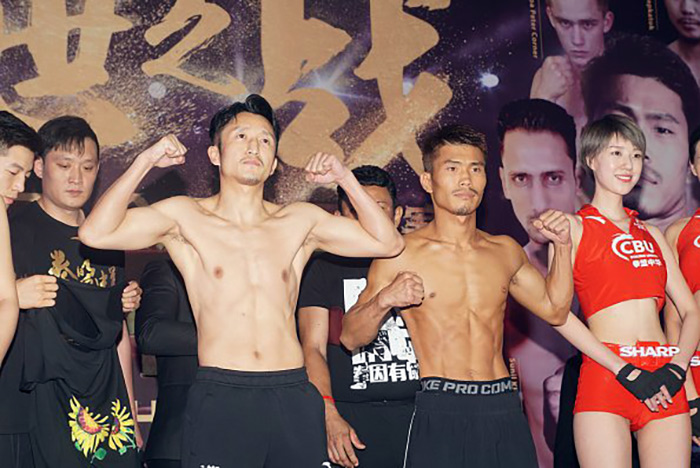 Zou Shiming’s experiment of promoting himself didn’t go to plan, as he was knocked out in the 11th round Friday by obscure Japanese underdog Sho Kimura at the Shanghai Oriental Sports Center in China.

Zou, who had parlayed his Olympic gold medals from Beijing and London into professional success, was fighting for the first time without promoter Top Rank and trainer Freddie Roach. As the main eventer making his first defense of the WBO flyweight title, and promoter alongside his wife Ran Yingying, and Chinese news outlets reporting that Zou was rumored to not have a full-time trainer, Zou had a lot on his plate.

That burden was compounded by the determination of Kimura (15-1-2, 8 knockouts), who had to walk through the constant counterpunching of Zou in the early rounds. An accidental headbutt in the middle rounds opened a serious cut outside the right eye of the 28-year-old from Tokyo, and referee Danrex Tapdasan brought in the ringside physician to take a look at it. But as the rounds progressed, Zou’s excessive movement and Kimura’s nonstop body assault began to slow down the 36-year-old Chinese star, and by the ninth round Kimura’s right crosses and left hooks were landing with more consistency.

In the eleventh, Zou, who had former WBA junior featherweight titleholder Yober Ortega of Venezuela working the corner as chief second, began to show the effects of the pace as he slipped twice in his own corner. Kimura stepped up the intensity, and with Zou’s body worn down and face swollen from punishment, he was trapped along the ropes where a barrage of right hands sent him down. Zou beat the count but the fight was waved off at the 2:28 mark.

The loss was the second for Zou (9-2, 2 KOs), snapping a three-fight winning streak since his unanimous decision loss to Amnat Ruenroeng for the IBF flyweight title back in 2015. He had won the vacant belt last November on the Manny Pacquiao-Jessie Vargas card in Las Vegas, scoring a second easy decision win over Thailand’s Prasitsak Phaprom.

The South China Morning Post reported earlier this month that Zou did not renew his contract with Top Rank, but was under contract with sports management partner Seca through 2019. Zou was promoting this fight on his own however, and Seca CEO Sheng Li cautioned beforehand: “I think he’s making a big mistake.”

Kimura, who has been unbeaten since losing his pro debut by first round knockout, had some multi-tasking duties of his own to deal with, working part-time delivering beer crates for a restaurant, according to CCTV, which added that he lacked the funds to buy new boxing gloves or training shoes. Prior to the fight, he promised to win the world title and place it on the grave of his mother, who died while he was young.

“Zou Shiming is the boxing star of China. I’m on the bottom of Japan; compared to him, I’m like s__t,” Kimura was quoted before the fight by CCTV.

Kimura’s win makes him the eleventh current world champion from Japan, and he could be heading towards a showdown with his compatriot and former RING flyweight champ Toshiyuki Igarashi, who is rated number 1 by the WBO at 112 pounds.