Abel Sanchez on Canelo-Golovkin, Daniel Jacobs and the ‘experts’ 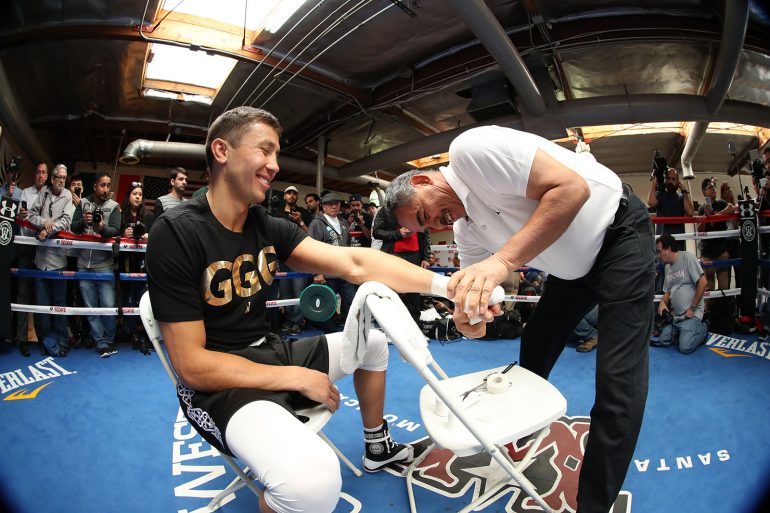 More of the masses, those outside the classes of “hardcore” and “devoted” boxing fan, are looking to August 26 and the Floyd MayweatherJr. vs. Conor McGregor mashup, with heavy anticipation. But among the non-casuals, the September 16 Canelo Alvarez vs. Gennady Golovkin bout is the more eagerly anticipated scrap.

The faceoff doesn’t have to be explained or re-designated as being anything other than what it is. It is not an “event” or what have you…It is a fight that fans have been craving for two years – and it’s almost here.

We checked in with Golovkin trainer Abel Sanchez, as he took a break from overseeing his Kazakhstani hitter, who last fought in March, when he took a narrow decision from Danny Jacobs in New York. And, in fact, not everyone who watched the bout agreed. Some liked Jacobs’ work better than Golovkin’s.

Of course, your eyes and my eyes are wired to different brains and we each probably scrutinize and assess a boxing match differently when we score it. Indeed, I still mull that Golovkin-Jacobs fight and attempt to derive all the knowledge I can from it, to help me get a better sense of what might happen in Canelo-Golovkin. I discussed this dynamic with Sanchez, who works out of Big Bear, California.

Did fans give Jacobs enough credit for how he performed at Madison Square Garden in March? Or did they too easily assume he did well because “GGG,” the unified IBF/WBA/WBC middleweight titlist, is slipping, at age 35?

“It’s funny how everybody knows everything. It’s funny; opinions are like you-know-what: Everybody has one,” Sanchez told me.

I think, I answered, a lot of that is because of this age in which we live. What with social media, everyday Joes have platforms and megaphones from which to shout their takes.

“And that’s why I don’t participate in that. Who cares?” Sanchez commented. “Experts everywhere. When journalists that make a living, like I do doing this job, ask, that’s different. We have a responsibility and a job to do. So if YOU are asking something, now that’s different. Ask away. I value your experience and boxing knowledge, so I will answer it with a question: “’Do you think Jacobs is the second best middleweight in the world?…If not, who beats him?’”

Not Grandpa-level but at a point where it would be understandable if his peak athletic years were behind him. We look at his output in recent fights: Golovkin landed 133 of 297 punches thrown in five-plus rounds against Willie Monroe Jr in May of 2015. He was on target to throw over 600 punches if the fight went 12 rounds.

Against overmatched Dominic Wade, in April of 2016, GGG threw 133 punches in less than three rounds.

Against Kell Brook, last September, GGG tossed 301 punches through two minutes into round five. He was busy, no sign of aging, I don’t think, in the volume department.

He tossed 615 through 12 against Jacobs, according to CompuBox, more than Jacobs’ 541, so we don’t see any volume dropoff. What about reflexes? It is impossible to really get a handle on that. To me, Brook looked as dialed in as could be vs. GGG. The same goes for Jacobs. One could surmise that each man was in peak performance mode, getting up for a fight of this magnitude. So, really – truly – is it possible to gauge how much, if any, GGG has lost due to aging?

I had to do it, had to pose the aging question to Sanchez. Has he seen a dropoff?

Is GGG aging? Are reflexes dimming, I asked the tutor. Was he Grade-A Golovkin versus Jacobs?

“He was Grade-A enough to beat the second best middleweight in the world. On to the next fight! Was Floyd old? Shane (Mosley) rocked him (in May of 2010) and (Marcos) Maidana hit him a lot (during their first bout, in May of 2014). Is Andre Ward old? He got dropped by Kovalev (in their first bout last November). Why weren’t these questions asked?” offered Sanchez.

On to Canelo, THE RING magazine champion, then…I think, I told Sanchez, the Mexican is a better style match for GGG than Jacobs was. He will come forward but not with such explosivity and mobility that Jacobs has. Thoughts?

“I’m glad that we have Canelo on such a high pedestal but it has to be equal. When (Golovkin) was knocking out 23 in row, that pedestal was a lot lower (according to the experts) because he was fighting ‘bums,’” Sanchez said. “Canelo has his plusses and minuses but, after the fight, he will be a bum also, if you listen to the experts.”

Hmmm, seems like Abel is miffed at these braying jackasses, who share their judgments with the confidence of Howard Cosell…

“No, I just wish that they would go back and read their stories. When has a fighter dominated a division like GGG? I know (experts say) it’s a weak division, the only time in boxing history. You can tell me when, I’ll wait…GGG has dominated, not just won!”

Yes, this age we are in, it is curious. Folks seem disinclined to go in the direction of offering credit to the victor. Instead, they often degrade the worth of the loser. “Ah, Canelo was a blown-up 154-pounder,” they might say afterward…But were those same critics saying that before the fight or only in retrospect, after the guy they tabbed a true threat got handled?

Moving on…It doesn’t sound like Team Golovkin has adjusted their ways and methods for this one because the stakes are so high.

“We are preparing for the toughest fight to date but, by saying that, every fight would be the toughest to date. Is there a need to change anything and master it in eight weeks? Doesn’t sound too smart.”

So, no switch to running more mountains…or cryotherapy or any of that? “Why change what isn’t broken?” the trainer asked. “All told, I think it’s a great match-up and a fight that boxing needs right now.”

And on the topic of “other match-ups”…Will Sanchez watch the Mayweather vs. McGregor tango?

“No, Circus Vargas, a local traveling circus, is in town. I’m going there. I like watching a circus live!”

Bang! On that note, with a clean and crisp overhand right being thrown, Sanchez headed out to watch over his middleweight ace work on getting to prime condition for what could be, on paper, his stiffest test to date. My take? Please make it clear right now, if you are opining, on how stiff a test you expect Canelo Alvarez to be. Because Sanchez is right about this age in which we live. Lots of blather and bluster and opining are frequently dispensed by iffy “experts” but aren’t often backed by top-grade reasoning.

Compared to Michael Woods, Howard Cosell wouldn’t even have the confidence of Howard Cosell. Toupee? We don’t need no stinking toupee…