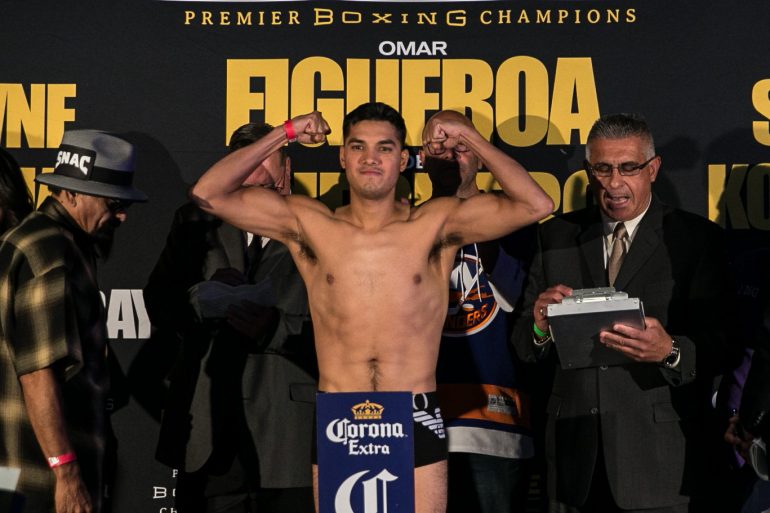 NEW YORK – Who was this man?

Dad had just been through a 12-round war with Antonio DeMarco, and his face was incredibly swollen. He went to a nearby emergency room in San Antonio, Texas, and after undergoing tests, he checked out OK.

Figueroa is an intelligent man, though, and he knows: Every time you step into the ring, whether it’s sparring or fighting, a little piece of you is left inside that squared circle.

The toll of boxing weighs heavy on Figueroa’s mind, and so he made the prudent choice to rest.

He took a break from the wear-and-tear of the sport and hasn’t competed in a match since that December 2015 night.

Figueroa (26-0-1, 18 knockouts) became sick two days before that weigh in, and in his previous fight against Ricky Burns, sparring wasn’t possible due to a fractured hand.

Now, after 20 years of non-stop boxing and training, it was time to finally kick back and relax.

“Going into the ring is never easy,” Figueroa, 27, conceded during an interview with RingTV.com. “At least the way I see it — I take kind of a very sinister approach to it — but I feel like it kind of helps keep me on my edge and at my best, because I never know when it’s going to be my last day.

“Maybe it doesn’t kill me, but it puts me in a coma; I end up crazy, something goes wrong. It could be my last time seeing my kids and my family like that. I see it that way and I take that approach to better myself and to appreciate and to work harder, obviously, so I avoid that at all costs.”

With 19 months of time to reflect and live for himself and his family in Texas, a break Figueroa called ‘”necessary,” he feels “good now. I’m ready and I’m excited.”

He’ll need to be ready, because his return bout figures to be yet another difficult, physical affair. He faces Robert Guerrero on Saturday on Long Island (8 p.m. ET, Fox). Figueroa has encountered his share of struggles at the scale, and now he’ll fight at an even higher weight with his debut at 147 pounds.

To prepare his mind, body and soul to reenter the sport, Figueroa simply took care of himself. He played relaxing music at bedtime with candles and incense lit. He reflected. He partied on South Padre Island and discovered an affinity for craft beer. “I like my me time,” Figueroa said.

He hasn’t worked with a sport psychologist, but it’s a consideration going forward. “I’ve always been interested in psychology and how the psyche of anything affects somebody.”

“I’m sure not everyone sees it in the same exact way, but we all think of that, it is a possibility that exists in the back of our minds at all times. It could be our last time entering or leaving the gym sane. So it’s tough.”

Figueroa is incredibly self aware – and honest – about the immense danger of boxing. But when he’s in the dressing room moments before it’s time to walk to the squared circle, he leaves “no room for those kind of thoughts. When I’m in the locker room, it’s all kill.”

Figueroa plans to eventually settle at 140 pounds. He knows welterweight isn’t his proper division. But he took solace when he stood face-to-face with Guerrero at Wednesday’s news conference, whom he deemed a “regular-sized guy.”

Even though Guerrero is on a losing skid, with four defeats in his last six fights, he figures to be the toughest test of Figueroa’s career. After all, Guerrero’s resumse resembles a who’s who of the welterweight division, and three of those defeats came to Keith Thurman, Danny Garcia and Floyd Mayweather Jr.

“I admire him for being at the level that’s he’s at and fighting the guys he’s fought and being competitive in those fights,” Figueroa said. “I know how hard it to get to that point and it’s even harder to maintain. When he said ‘I took a break, too,’ I feel you, man. I’ve been there.”

Now Figueroa is back and ready to pursue another championship.

With his good looks, affable personality, crowd-pleasing style and command of both English and Spanish, he has all the qualities of a star. He just needs to stay active and rack up victories.

After all, he knows exactly who he is.