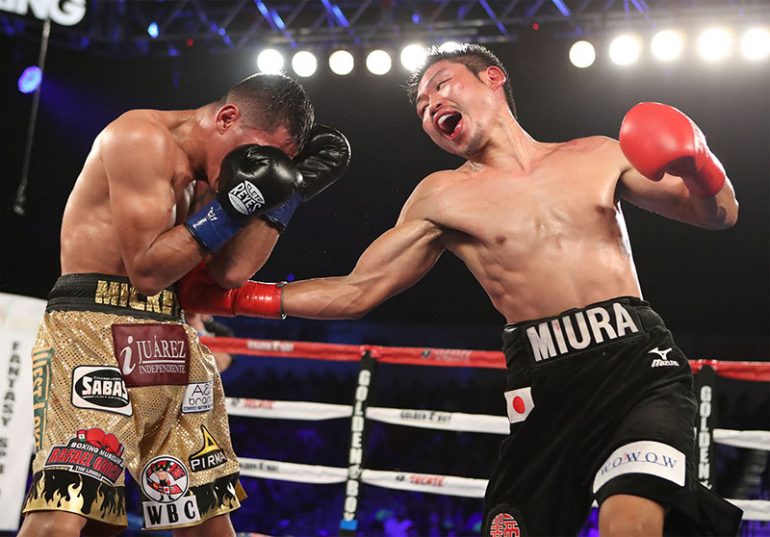 The Japanese banger has the reputation of being a walking, talking, battling action figure, particularly after his unforgettable Fight of the Year war of attrition with Francisco Vargas in 2015. Not many fighters are more fun to watch.

And that fact isn’t lost on the Tokyo resident.

“That’s important to me,” he said through an interpreter before a press conference to promote his clash with another brawler, WBC junior lightweight titleholder Miguel Berchelt, on Saturday at the Forum.

Miura, originally from a small town in the far north of Japan, began fighting at 15 years old. Of course, he learned the finer points of boxing – he’s a former world titleholder, after all – but he has never bothered much with them in his fights.

Sometimes that means he ends up on the wrong side of a knockout. He was stopped by gifted countryman Takashi Uchiyama in his first title fight, in 2011, and by Vargas, but they felt his power: Both had to rise from knockdowns in their victories.

“He doesn’t know any other way,” said trainer Rudy Hernandez, who works as Miura’s cut man. “He’s not worried about being knocked out; he’s worried about knocking the other guy out.

“(His team’s) vision is to land one punch that can define a fight.”

Miura turned pro in July 2003, meaning he has been giving and taking punishment for 14 years. Yet he seems to be strong as ever at 33, an age when many fighters – particularly those of his size – are already declining. He has knocked out his two opponents since the Vargas setback, including veteran Miguel Roman in another entertaining fight in January.

How is that possible?

“I’m durable. My body is strong,” he said, adding that he’s no fitness fanatic. “No, not really. I’m just naturally durable.”

Miura won the WBC 130-pound belt – the same one Berchelt holds – by stopping Gamaliel Diaz in April 2013 in Tokyo and successfully defended it four times until it was taken from him by Vargas, who then lost it to Berchelt on the same card Miura beat Roman.

If Miura beats Berchelt, he will become a two-time junior lightweight titleholder. Not bad for a safety-last banger.

To be clear, Miura isn’t in the class of Japanese junior bantamweight star Naoya Inoue, another action fighter. Miura can match Inoue’s intensity and courage but he doesn’t have the special skill-set of his 24-year-old countryman.

“That’s the difference between a very good fighter and a great one,” Hernandez said.

Miura would be OK with that assessment. He’ll be more than satisfied with his world title – or titles, if he can beat Berchelt – and the fact that he has become a fan favorite because of his unusual fighting spirit.