Robinson Castellanos a happy underdog ahead of Corrales bout 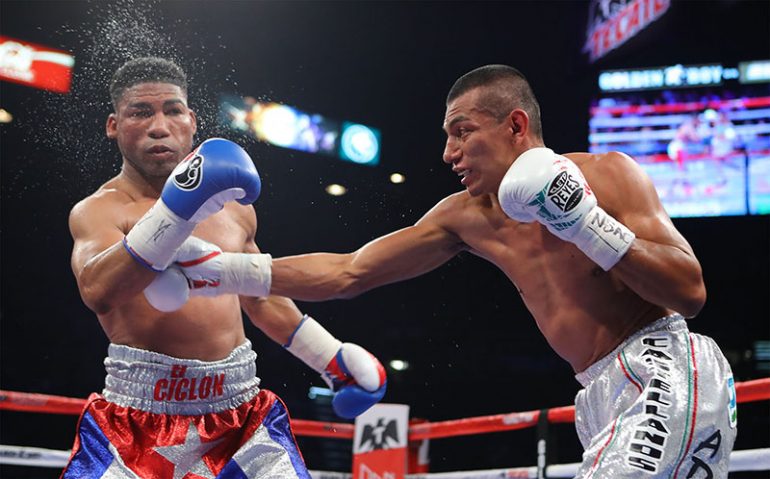 Earlier this year, Robinson Castellanos wasn’t really sure where his boxing career was going.

“In my mind, never was there retirement, just some doubt. But when the opportunity came, everything changed,” Castellanos told RingTV.com through a Spanish translator at a media workout Wednesday afternoon in Los Angeles.

That opportunity was to face Yuriorkis Gamboa in the main event of an ESPN2 card this past Cinco de Mayo, and not only was Castellanos coming off a knockout loss, but it had happened 14 months prior. That night in Las Vegas, Castellanos shocked everyone by knocking Gamboa down twice and pulling off the upset once Gamboa quit after seven full rounds.

Castellanos (24-12, 14 knockouts) fell to his knees in jubilation after learning Gamboa threw in the towel, and there he became hysterical as he got a new lease on his boxing career. However, that’s how it was on the surface; on the inside, a personal moment in his past was going through his head.

That conversation was well over eight years ago, and it was simply about how great the Cuban had looked early in his title reign and in the prime of his career.

“For his name, history as a an Olympic and world champion, yes,” responded Castellanos when asked if beating Gamboa was his biggest moment. However, the 35-year-old quickly maintained that there is a bigger one ahead. “This fight is bigger than that win.”

On the week of his fight with Gamboa, who signed a contract with Golden Boy Promotions in January, the WBA ordered the contest to be a junior lightweight elimination bout. Considering Golden Boy had just signed Jezreel Corrales — the current WBA junior lightweight titleholder — it seemed to be a ruling that would’ve conveniently had the company’s new signees clash in a good matchup. But Castellanos thwarted any such plan. Now he will face Corrales for the belt, and finds himself in the middle of this Saturday night’s HBO “Boxing After Dark” tripleheader (10:00 p.m. ET / 7 p.m. PT).

“So difficult. A very quick boxer, a lefty, just a very difficult fight,” Castellanos admitted about his Panamanian opponent, whom he was sure to greet upon his arrival at the City of Angels Boxing Gym. “I always like to introduce myself to my rivals. As a respect to him and all the fighters. He’s a very good fighter.”

Castellanos barely got to the media event in time to do that, but the Mexican from Celaya stayed well after it was finished in order to get a full workout in. Other than sparring southpaws to prepare for Corrales, Robinson — who has the nickname of Robin Hood — said training camp went well, but not much has changed with it being the biggest fight of his life. He seemed just happy to be there as he worked on some combinations with his trainer. No different than his usual happy disposition, but there was a younger version of him also smiling.

“Some of my father is in my brother, Balan, who is here with me. His first time in the U.S.A. I’m so very motivated and happy,” said Castellanos. His father Jesus passed away in October 2009, but thanks to what he called a strange family custom, it’s all part of the plan. “My father said, ‘Don’t visit me at my grave — I am always in your mind and in your heart.'”

Surely that was the case just two months ago, and this Saturday night at The Forum in Inglewood, California, Castellanos will have nothing but tranquility in his head as he plays the role of underdog yet again.

“I don’t have doubts. I came here to win. I know defeat is always there, that’s the way boxing is, and if I lose, I will make sure to make a war in the ring.”