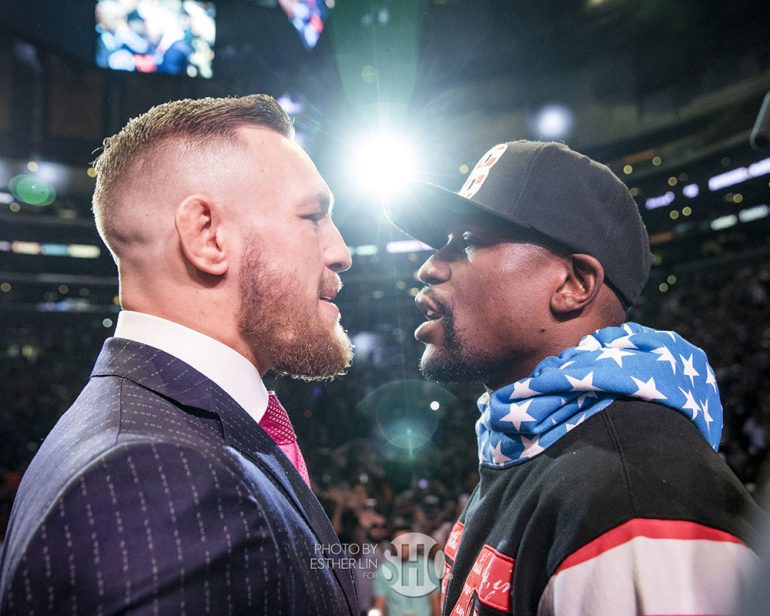 LOS ANGELES – The four-city World Tour to promote Floyd Mayweather vs. Conor McGregor on August 26 kicked off at the Staples Center Tuesday afternoon, and based on the the reaction of those in attendance and watching online, this one-of-a-kind event got off on the right foot.

11,000 people showed up to see the biggest stars of boxing and MMA meet in person. At one point, 170,000 were watching live on the Showtime Sports YouTube stream, and if they expected a spectacle, they weren’t disappointed.

McGregor, the current UFC lightweight champion (155 pounds), walked in first from the other side of the arena to an empty stage where he had a chance to dance for the crowd while he waited for his opponent to join him. Mayweather, perhaps the most decorative boxer of all time, entered in the same drawn-out manner, and the crowd went nuts as they finally got to see the two within arm’s reach. It didn’t take long for McGregor to talk first and with Mayweather silently standing still in front of him, the Irishman went into various MMA poses that riled the crowd even more.

There was no question: The majority of those in attendance were there to support the UFC superstar, and seemingly every time Mayweather showed on the big screen, their boos drowned out anything else. 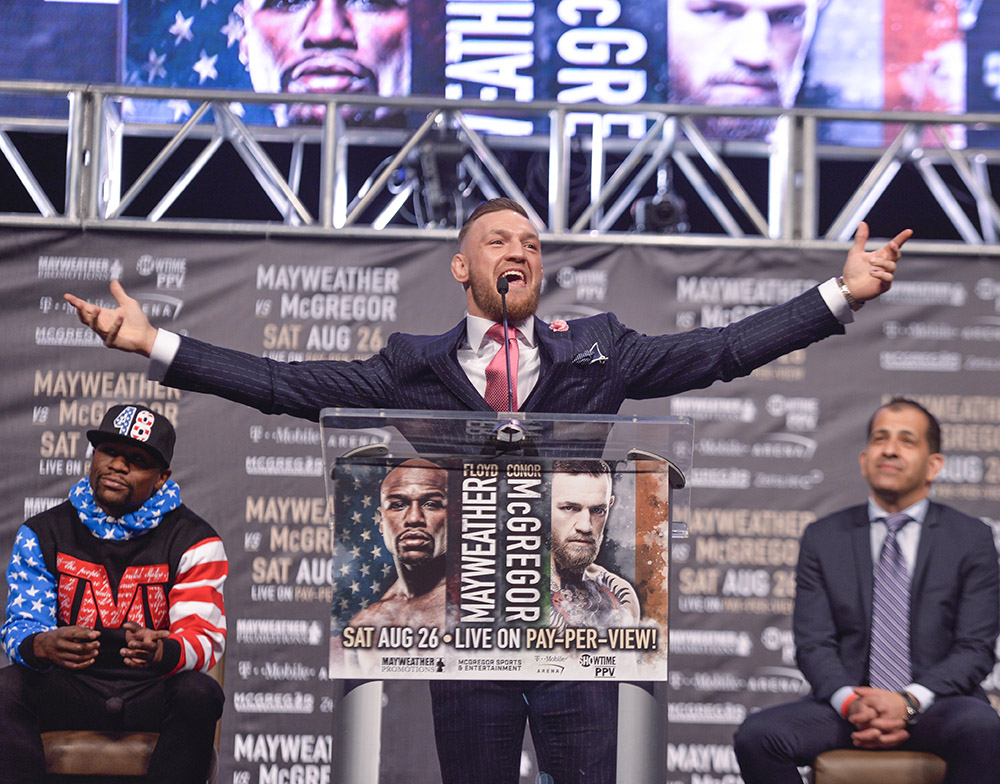 “He will be unconscious within four rounds,” proclaimed McGregor at the podium after mocking the corporate sponsors who spoke there before him. “He has not experienced this. He’s fought people that have shied away from him … I don’t fear him. I don’t fear this limited set of fighting. This is a limited set of rules that makes this half a fight — a quarter of fight. If this was a true fight, it wouldn’t even take one round.

“All these rules, all these restrictions, it doesn’t faze me — it amuses me. The gloves. They have to be 10 ounces at 154 pounds. No problem. Give him the gloves up, I’ll wear the 10 ounces. No Mexican-made gloves, OK no problem. No gloves made out of horse hair, alright no problem — I don’t give a fuck … All I need is a gum shield. Climb me up to the ring and I’m good to go.”

McGregor, who turns 29 in three days, said he wasn’t really prepared to give a speech and kept it short overall, but cited providing for his newborn son as added motivation. That he will indeed do in this venture, which will end with at least an eight-figure payday.

“No one’s done this shit before. You gotta give me that,” McGregor said before speaking about Muhammad Ali’s exhibition with Antonio Inoki in Japan and James Toney’s lone fight in the UFC. Wearing a pinstriped blue suit, he also made sure to shoutout an eventual clothing line of his, and pointed out a detail on his jacket that really encapsulated the personality that made him what he is today. 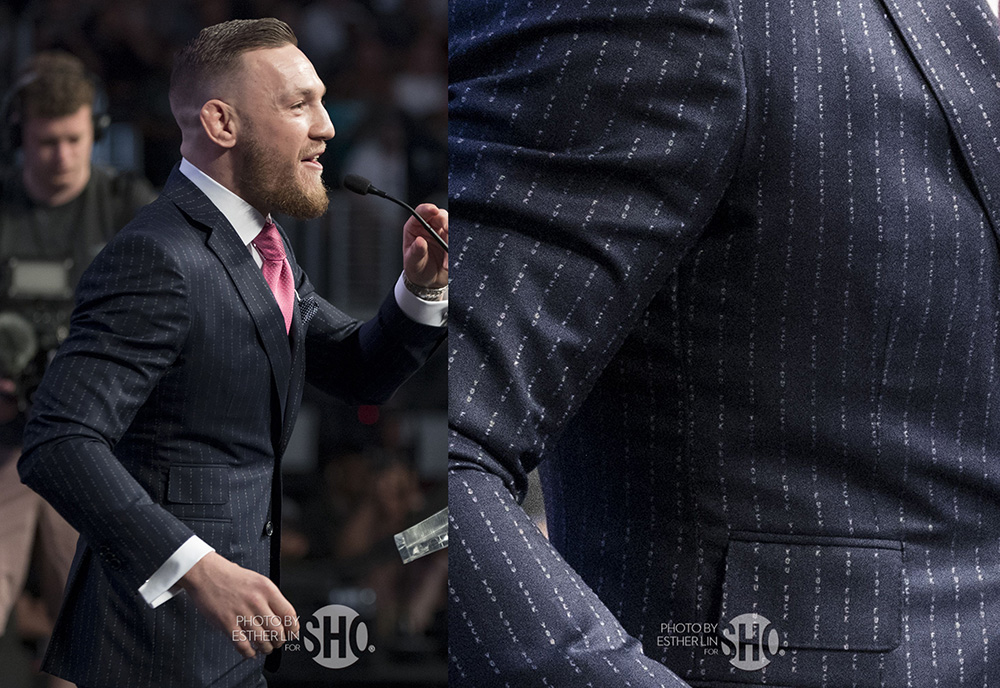 “If you zoom in on the pinstripe it says, ‘Fuck You.’”

Coming out of retirement, Mayweather, 40, relished his time at the podium, and easily doubled his counterpart’s speech. He rallied his contingent of fans by yelling, “Hard work,” with them replying “Dedication,” and when he asked for them to point to the “easy work,” they did so at McGregor. Mayweather proclaimed 21 to be the number of note — that being the number of years he’s been dominating the sport — and after he said he would knock McGregor out, there was a response.

“You haven’t knocked anyone out in 20 years,” McGregor laughingly said at his stool with a microphone in hand. 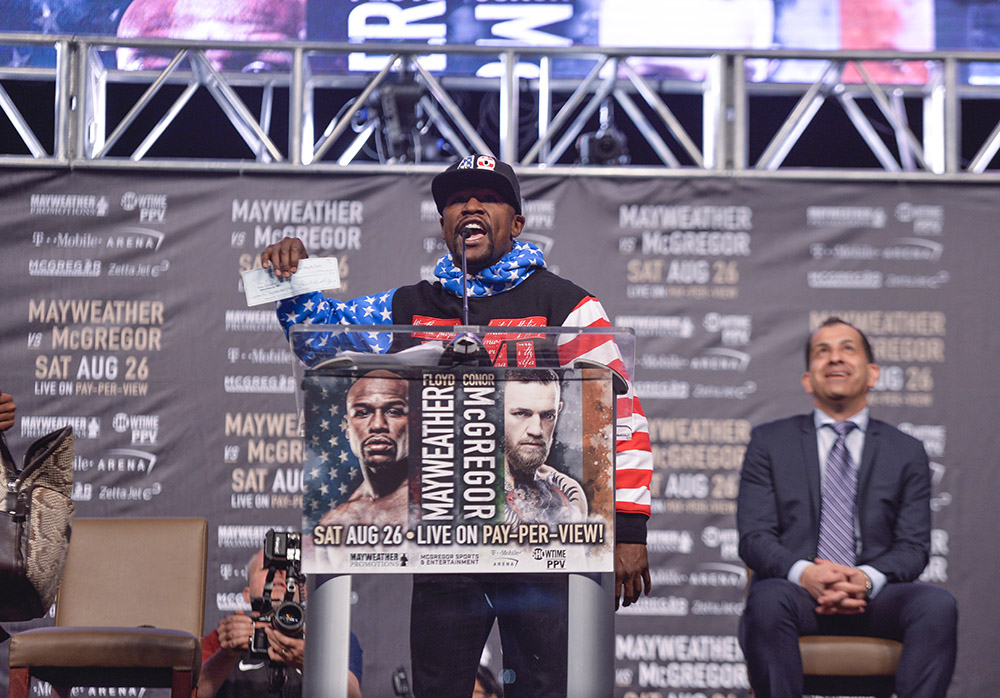 In response, Mayweather asked for someone to bring him his backpack and proceeded to show off a $100,000,000 dollar check that he hadn’t even cashed yet.

“This is what a hundred million-dollar fighter looks like,” said Floyd. “I haven’t even touched this shit.”

“That’s for the tax man,” McGregor quickly replied on his own accord.

“You aint gonna do shit,” McGregor said, but ironically, something was done about his working microphone after that.

The verbal back-and-forth is something normal at UFC press conferences, and quite frankly, that moment was the highlight of the press conference given the reports of Mayweather’s recent tax issues. With McGregor now silenced, however, Mayweather got to speak his mind without interruption and talked about Conor’s complaints about all the rules.

“We gonna get off in that ass, and guess what, I’m an old man. I’m not even the same fighter I was 20 years ago, 10 years ago, 5 years ago, or 2 years ago, but I got enough to beat you. We know mister tap-out likes to quit, and you will wave that white flag. I’m guaranteeing you this: You’re going out on your face or on your back — so which way you wanna go?” Mayweather turned and asked. “That’s right, stay quiet you little bitch.” 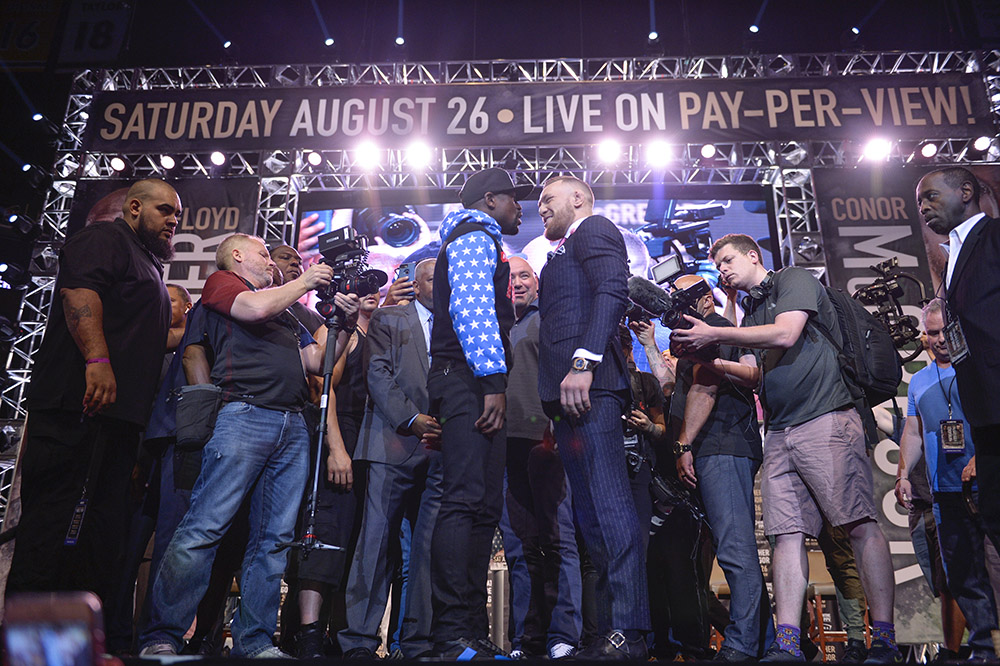 Once he was finished, Mayweather called for Conor to go face-to-face with him, and they proceeded a face-off with more than enough time for everyone to capture it. The two barked at each other, but no foul play was involved. Besides, they will be doing it three more days in row this week (Toronto, New York, London), and the pissing contest will surely continue as the promotion gets its flame fanned with quips and anecdotes that’ll make one forget about the lopsided amount of experience in a boxing ring between the two – a sticking point by this event’s detractors, but that’s not really going to matter when it comes to this fight and how successful it will be.

“So far the responses to Mayweather-McGregor has really surpassed anything we saw in Mayweather-Pacquiao,” said Stephen Espinoza to RingTV.com after the presser. Espinoza, vice president of Showtime Sports, was the lead producer in boxing’s most lucrative event in May 2015 and his company will provide the pay-per-view telecast for this one ($99.99 HD). “I think it’s because you’re building from a couple of different fanbases, plus you’ve got the appeal of a once in a lifetime, unprecedented event.”

As for if Mayweather-McGregor can eclipse the record-setting PPV buy rate of Mayweather-Pacquiao, Espinoza responded:

“I never thought I’d be in a position to say it’s possible to reach that again. I’m not saying we will get there, but I feel it’s within reach. A lot of things would have to go right for that to happen.”