Jeff Horn feels he could knock out Manny Pacquiao in rematch 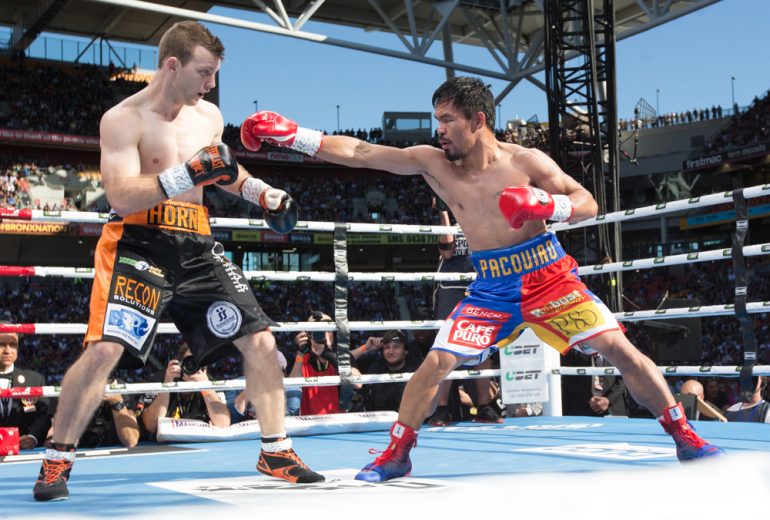 Jeff Horn exited to the locker room at SunCorp Stadium a champion as 50,000-plus fans showered him with cheers, and when he grabbed his phone, there were hundreds and hundreds of text messages awaiting him.

The former schoolteacher responded to each and every one, but still hasn’t turned his attention to the hundreds of Facebook messages; there simply hasn’t been enough time.

The surprise welterweight champion, who upset Manny Pacquiao earlier this month, is now in Los Angeles for the ESPYs, an appearance he could only dream of a month ago.

There was an outcry of robbery from both Teddy Atlas and Stephen A. Smith on the ESPN telecast, and from thousands more on social media following what figures to be anointed “upset of the year” when all is said and done.

Horn (17-0-1, 11 knockouts) has dealt with plenty of social media harassment, and even his pregnant wife, Joanna, hasn’t been spared. Horn has tried to shelter his wife as much as possible; he knew the onslaught was coming.

Fortunately, the Aussie received some validation Monday — not that he truly needed it — when the WBO revealed that their panel of five independent judges thought Horn won the fight 115-113. Indeed, this was no miscarriage of justice.

“They’ve scored it for me once again,” Horn told RingTV.com during a phone interview Tuesday shortly after arriving in L.A. “I feel like me, myself, won the fight. I now have good backing behind me (following the WBO panel). (I didn’t earn the decision) because it was in Australia; it was because I won the fight. I took it to him and I won.”

Horn is enjoying the fruits of his labor now, but soon enough it will be back to camp with trainer Glenn Rushton. That’s because Pacquiao has the right to exercise a rematch clause, and if the return bout happens, as expected, Horn says it will take place before the end of the year with no interim fights in between.

“I think I’ll do better the second time around,” Horn explained. He even believes he could score a knockout of Pacquiao if he lands a clean power shot. “With all the nerves and energy I wasted the first time, all that will be gone. … I think that occasion, just having that crowd and being up against someone like that gives me a lot of experience in one go, so I think I’ll be way better the next time I go out for sure; no Round 9 repeats.”

That was the moment the Filipino senator almost ended the fight. A series of vintage Pacquiao shots placed Horn on wobbly legs, but the 29-year-old didn’t go down. After referee Mark Nelson instructed Horn to “show me something, or I’m stopping the fight,” that’s exactly what happened.

“The Hornet” said it’s hard to remember Round 9 — or any fight in detail for that matter — but that he clearly recalls “going blurry at one stage” in that round.

“I felt like I was in good enough shape to keep fighting and keep moving on,” said Horn, who believes he had so much success because he didn’t show Pacquiao respect. “I was shocked that the referee said that. I was quite happy to show him something in the next few rounds.”

While Horn was trying to soak in his victory, Atlas told him in no uncertain terms that he really lost the fight. Horn said he was “a bit shocked” to hear it and that “the timing wasn’t nice.”

That’s all in the past now, though.

Horn has his sights set on unification, and even a pipe dream bout against Floyd Mayweather Jr. — “especially if he wants to actually break records fighting boxers, not UFC fighters.”

But first things first: a return bout with Pacquiao.

Horn is the champion, and all he can do is prove he truly is the better man.