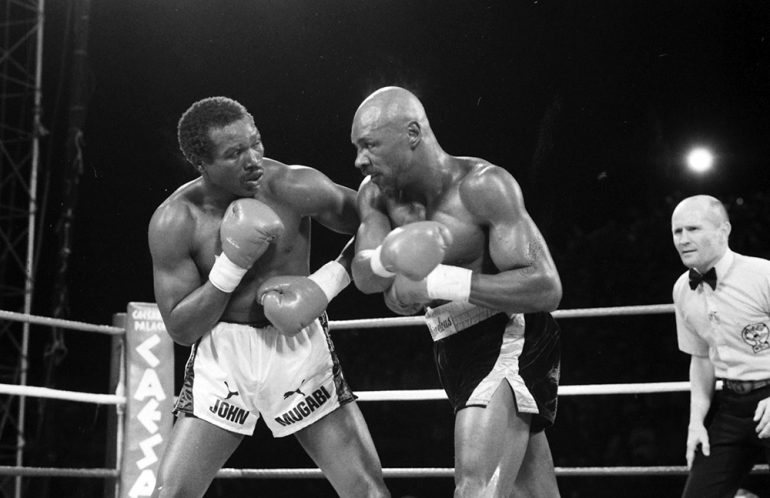 Hagler briefly steps into an orthodox stance to swipe John Mugabi with a right hand.
10
Jul
by Anson Wainwright

John Mugabi was one of the most exciting fighters of the 1980s. He was known for his all-action, seek-and-destroy style and bone-breaking power.

“I was a knockout fighter,” Mugabi told RingTV.com. “I just knocked the guys out and I liked that.”

Mugabi came from a humble beginning. He was born on March 4, 1960, in the Ugandan capital of Kampala. Life was difficult after dictator Idi Amin seized power in 1971.

It was at the Junior World Championships that, as a 16-year-old, Mugabi first caught the eye of the boxing world, taking silver after losing to Herol Graham in the final.

Two years later at the Moscow Olympics, Mugabi knocked out three of his four opponents en route to the final, where he met Andrés Aldama, a supremely gifted Cuban who, four years earlier, had lost in the final to Sugar Ray Leonard. This time Aldama would claim gold, besting Mugabi at welterweight.

Mugabi wasted little time making the transition to the pros and signed with influential promoter/manager Micky Duff after the Olympics. The Brit orchestrated Mugabi’s early career as “The Beast” campaigned at both junior middleweight and middleweight, terrorizing everyone he faced.

He fought in several countries on the way up and learned on the job against seasoned campaigners such as Curtis Parker (KO 1), James Green (TKO 10) and Frank Fletcher (TKO 4).

Mugabi was scheduled to face Thomas Hearns for the WBC 154-pound title in November 1985. However, that fell to the wayside when Hearns elected to move up to 160 pounds to face Marvin Hagler in a superfight. Mugabi — who by now sported an exemplary record of 25-0 (25 knockouts) with 17 KOs coming inside three rounds — waited in the wings for the winner. Hagler would stop Hearns in a thriller.

The stage was set for Mugabi to challenge Hagler for the undisputed middleweight championship in March 1986. They met at the outdoor arena at Caesars Palace and a brutal, back-and-fourth battle ensued. Ultimately, Hagler, though given the hardest fight of his championship tenure, stopped the game Ugandan in the penultimate round.

Many believe that it was after Sugar Ray Leonard watched the Hagler-Mugabi fight that he felt it was time to return and face Hagler, feeling the champion’s skills had eroded sufficiently to beat him.

It was a tough loss for Mugabi, who earned a career-high $750,000. He’d lost the aura of invincibility. However, the heavy-handed African was given a second shot at a world title, this time down at junior middleweight, when he met Emanuel Steward-trained Duane Thomas.

In a strange twist, in the third round Mugabi was caught with an accidental thumb that injured his left eye socket, forcing him to get counted out. Ironically, prior to the fight, Mugabi had argued against wearing gloves with the thumbs stitched to the glove. 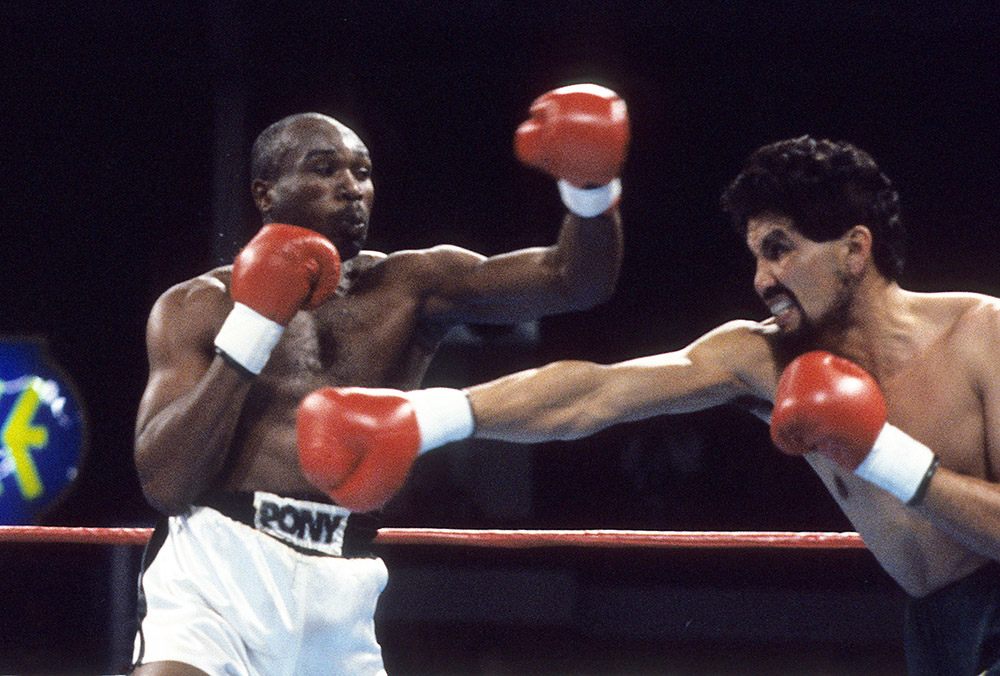 A disenchanted Mugabi walked away from boxing for just over a year before returning and leaving a another trail of destruction behind him, winning eight consecutive fights, all by knockout inside four rounds, to earn a shot at Rene Jacquot. Mugabi vanquished the Frenchman, who suffered a twisted ankle, inside a round to win the WBC 154-pound title.

After two non-title bouts he took on Terry Norris. In a battle of gunslingers, Norris prevailed by first-round knockout. Mugabi became only the second fighter — along with Al Singer — to win and lose a world title in one round.

Two low-level wins set Mugabi up to face the younger, bigger, just as heavy-handed Gerald McClellan for the vacant WBO middleweight strap. Mugabi was dropped three times and stopped late in the first round.

With nowhere else to go and his appetite for the sport clearly diminished, Mugabi walked away from boxing. However, after a five-year hiatus, Mugabi, now living in Australia, returned. Although he won the Australia super middleweight title, he was no longer the force he once was and finally retired after losing to future Roy Jones Jr. victim Glen Kelly in January 1999. He exited with a record of 42-7-1 (39 KOs).

Mugabi, now 57, lives in Brisbane, Australia. He is divorced but has five children.

He kindly spoke to RingTV.com about the best he faced in 10 key categories. 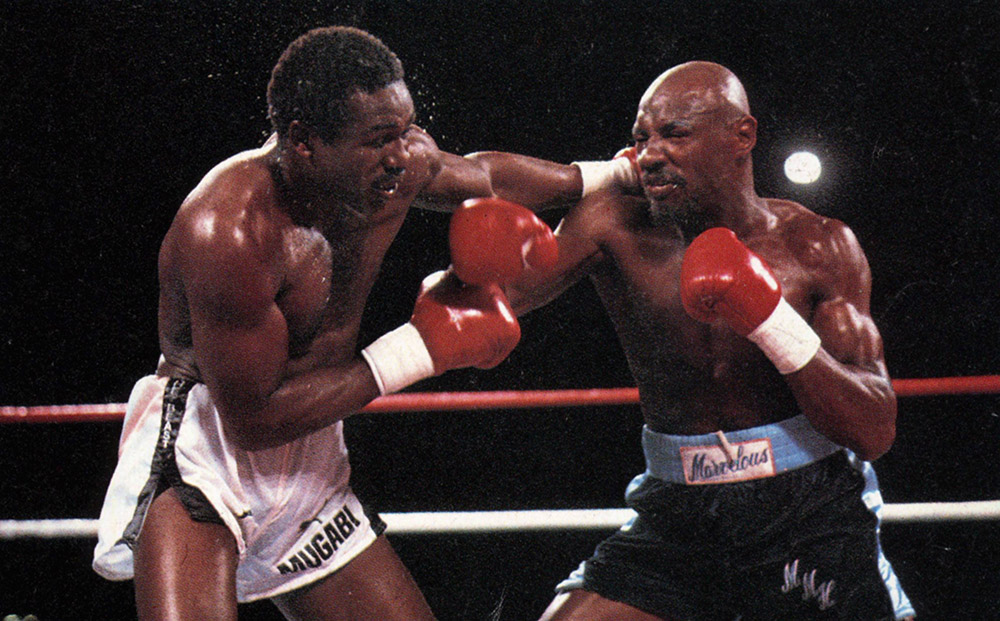 BEST JAB
Marvin Hagler: His jab was very effective because he was southpaw. It can destroy you. He also had a come-forward motion that helped him propel his jab with power and precision. The jab stung like hell.

BEST DEFENSE
James Green: This was my first fight that went past the halfway mark. Green was very efficient on the inside and distributed his punches with precision and had a Joe Frazier-like style. He literally knocked me out in one of the early rounds of our fight but I was saved by the bell, then rallied to beat Green in the 10th. His defense was cage-like and he simultaneously attacked with short, powerful punches.

BEST CHIN
Hagler: By virtue of the fact that he was the only fighter I faced who didn’t go down to my clean punches, especially an uppercut in the sixth round of our fight. My power would have woken up ancestors of other fighters I fought when I connected with the uppercut, but he barely wobbled after the punch landed.

FASTEST HANDS
Green: I found it hard to see his punches … that’s why I got caught in the early rounds of the fight.

FASTEST FEET
Curtis Parker: I had to chase him down to knock him out. He was a very fast and talented fighter from Philadelphia.

SMARTEST
Hagler: The fact that Marvin changed stance after losing the first round – he changed from being southpaw to orthodox and I made the mistake of changing to a southpaw and I got knocked out. I was never given a rematch because Marvin went through hell.

STRONGEST
Gerald McClellan: He was a Kronk fighter who had a title fight with me, knocking me out in the first round. My passion for boxing was lost in that fight. I was fighting to pay bills for that fight.

BEST PUNCHER
McClellan: The right hand that caught me was surgically trained and was the best recipe for a knockout.

BEST SKILLS
Hagler: Hagler’s experience, talent and toughness enabled him to show the best set of skills. I attribute this to Hagler’s length of time in the sport before becoming champion

BEST OVERALL
Hagler: He had too much experience for me. He had barely lost a fight from the start of his career.