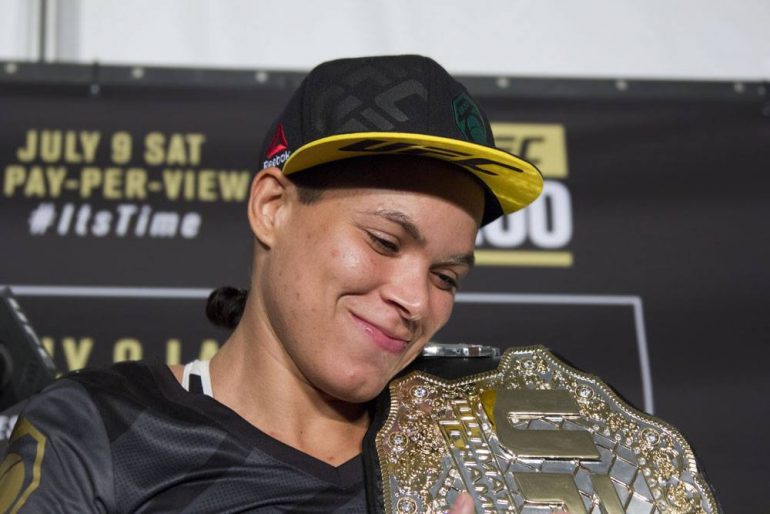 After being hospitalized hours earlier, UFC women’s bantamweight champion Amanda Nunes has been pulled from her main event fight against top-rated Valentina Shevchenko at UFC 213, as confirmed by UFC president Dana White.

The report of Nunes’ illness and withdrawal was first brought to light by Ariel Helwani of mmafighting.com. White told LA Times beat writer Lance Pugmire via text message, “I don’t know why Nunes (14-4) was withdrawing from the card after being examined by a physician.

“The doctor cleared her to fight. She said she doesn’t feel good,” White said. “It is what it is. You can’t make anyone fight.”

Now the scheduled co-main event interim middleweight title fight between Yoel “The Soldier of God” Romero and Robert “The Reaper” Whittaker will elevate to the main event status at UFC 213. The new co-main event will be a heavyweight bout between former champion Fabricio Werdum and Alistair Overeem, who will be fighting to become the No. 1 contender for champion Stipe Miocic.

Many talked about how drained Nunes looked, as fighters often do, at Friday morning’s official weigh-in around 10 a.m. PST. To her credit, the “Lioness” has never officially missed weight or pulled out of a fight for weight-cut issues in her nine-year MMA career until today.

The bout will likely be rescheduled soon. Bob Bennett of the Nevada State Athletic Commission stated that Nunes had issues “beyond” weakness from weight-cut that led to her withdrawal.

In the meantime, unbeaten women’s strawweight champion Joanna Jedrzejczyk spent Saturday morning “begging White for the fight via text messages and social media.” Jedrzejczyk last fought at UFC 211 in May and is aiming to fight in November at UFC 217, but she’s in town for International Fight Week and told White she would take on Shevchencko.

To the chagrin of fans and media types, the strawweight champ has no chance to fight tonight, as medical screening and other clearances require a slightly longer period before the NSAC would clear her. Therefore everyone must hold tight to see how this story unfolds over the next few days