Jarrell Miller gets back in heavyweight mix with Gerald Washington fight 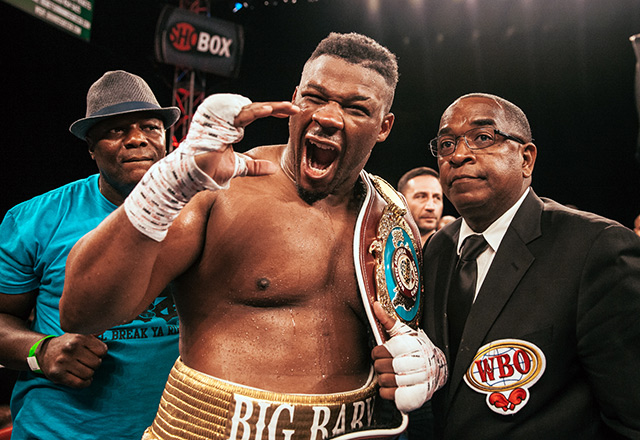 His mouth is maybe a half step ahead of the strength of his resume, but Jarrell “Big Baby” Miller cannot and will not be contained, will not heed any advisors who tell him to chill, play it patient, be the humble giant as he continues his ascent up the heavyweight ladder.

The 29-year-old Brooklyn-born boxer, who went from kickboxing to the squared circle, and now finds himself thisclose to a title shot should he get past Gerald Washington July 29 at Barclays Center, talks smack.

Copiously and skillfully, he talks s__t about current foes and perhaps future foes, and here’s his answer when informed that a former heavyweight contender has advised him to cool it, let his wondrous actions speak for him.

Monte Barrett, a friend of mine who challenged a couple times for crowns, and indeed is a humble warrior sort, commented on an Instagram post/boast from Miller (18-0-1 with 16 KOs; last fought August 2016 when he stopped Fred Kassi in three) about what he’s going to accomplish.

Let your actions speak for you, was the message from Monte.

Miller isn’t about that.

“It’s one thing to be quiet and humble outside the ring,” he said on the phone from the gym he owns in Astoria, Queens, New York. “But I’m putting my life on the line in there! Monte was from Brooklyn, but people never wanted to hear his interviews. He may be older, but he’s not wiser!” 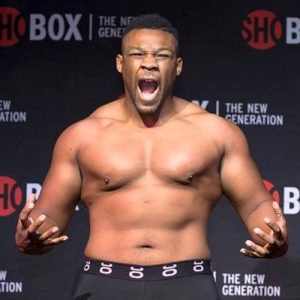 Understand, Miller has the schtick down. He isn’t actually in a mode to bite Barrett’s head off, mind you. But he gets it…that to stand out in this age, where everyone has a publishing platform and fight writers get 30 press releases a day, or more, that you have to stir that pot. Conor McGregor, he noted, stirred the pot so hard he conjured up the opportunity of a lifetime, and will make a mint fighting Floyd Mayweather Jr. Aug. 26.  (“I see McGregor getting knocked out in four or five rounds, Miller told me, by the way.)

The 6-foot-4 hitter, who walks around sometimes at 300 or so pounds, has been off since last summer. He and co-promoter Dmitriy Salita had to hash out new contractual terms in court, and that took time.

“I been hitting the notebook, doing my homework, research, getting the business side down pat,” Miller told me. “The court situation is behind me, we worked it out, now it’s full speed ahead. I’m thankful Showtime believes in me. Now, I am taking this fight sort of on short notice. I got word less than a month ago. Because there is a difference in training and then training to be ready for a fight.”

He could have come back in against a rust shedder sort of foe, but no. Washington (18-1-1 with 12 KOs; age 35; lives in California) is long and tall and no bum. “I think he’s a decent fighter, been in with some decent opponents,” Miller said. “But he’s Chicken Little, the way he talks. He’s actually mediocre.” Miller isn’t impressed with the Washington manner of being so humble and thankful that Deontay Wilder gave him a crack at his WBC crown, and thinks Washington was just happy to go rounds.

Furthermore, Miller says, Washington isn’t the only one who got seasoning by being in with Wilder, the WBC champ from Alabama. Miller and Wilder sparred a few years ago, BBM says, and he learned from that. In fact, he thinks Wilder realizes that Miller is now 50 pounds beefier and “I was making him look stupid and miss punches. My power made an impression. And now I have my man strength! Of course Wilder doesn’t want that!” But he doesn’t want to get ahead of himself…

Back to Washington. Miller’s heard the ex-footballer says he will come forward and take the fight to Miller, but Miller is dubious. He’s heard that before, he said, and has seen Washington fight more cautiously than promised. If indeed Washington comes forward and brings the fight to him, he told me, he “guarantees” a KO, in round three, four. “Yeah, on paper he’s the best but we will see, the heart, will and skills, we will see. He doesn’t throw punches with enough authority to keep you off. Bring the fight to me? I find that kind of unbelievable. If he runs like usual I will stop (him) around seven or eight. Fighters he was bigger than had to bring the fight to him. Bring the fight to me, and I outweigh him?”

Miller didn’t want to get too far past Washington, but it is clear, it seems he’s open to taking the best fight/package/challenge, with whoever is holding a crown when the time comes. Certainly it would make sense to put him on a Wilder card, and get them on parallel tracks. But Washington is on his mind. “I’m not looking past Chicken Little, Chicken Foot, he’s gonna be fried chicken when I’m done.”

If you haven’t seen Miller in the ring, he’s quite methodical. No, he doesn’t look like a chicken with head cut off. He moves patiently, doesn’t get flustered. He has pop in both hands, and likes to come underneath with a right uppercut after his foe’s chin and eyes dip. Miller smacks both sides of the body then comes upstairs and is busy for such a wide body. He has a mean streak, gets it that KOs pay bigger bills. He is lighter on his feet than you would assume, and his jab is often a range finder, with a sharp right hurtling behind it. He is confident in his chin and doesn’t seek to avoid contact. He will be right there, to bang and be countered, and heavily tested, as he edges upward toward the Wilders and AJs. 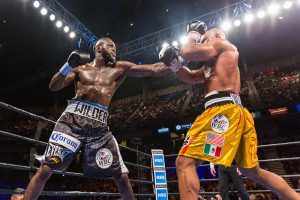 Washington got on radar screens when he tested Wilder in his last outing. Watchers saw him stand tall, pop a jab, look to be smart and not throw caution to wind. He can tend to get on the back foot, on the defensive, after tasting power. He clinched Wilder and moved laterally often after getting stunned early in their faceoff. Washington tends to be a “one and done” jabber, so Miller might see that from the get go, and press him. Washington too has nimble feet for such a tall lad but it looks like Miller could have some luck crowding him more than Wilder did.

Salita spoke to RingTV and told us he’s quite pleased he and Miller have gotten back on the same page.

“Our relationship is good,” said the fellow Brooklyner, an ex-contender himself, “and I know he understands that that I believe in him, and invested in him when others didn’t recognize his talent like I did, in and out of the ring. I predicted he’d be where he is now! For Jarrell, as a fighter, to take such a hard fight, it shows his dedication in wanting to get back to the top right away. He could have fought on the August 4 Shobox card, a stay busy, but he said, ‘give me the big one’ and that’s what you want to see. There are a lot of guys running from big fights, and he jumped on one. A lot of guys talk the talk and don’t walk the walk. He talks the talk AND walks the walk!”

Salita said Miller wanted to get going with his own promotional company, so they agreed to work with that reality. “I believe he is the future of the heavyweight division, and I always envisioned him being a world champion. A win will get him on the fast track to being the king of the division and help build his brand.”

Salita is feeling like it makes more sense for Miller, born in Brooklyn, to be the heavyweight face of Brooklyn Boxing, the Barclays brand. “New York has been needing a New York-based real heavyweight and I think Jarrell is that!”

My take: Miller caught my eye early on, when Salita had him on small club shows. The size, the feet, and yes, that mouth. And Lordy, the guy came to the ring wearing a diaper one time, reflecting his nickname. THAT takes a showman’s heart! I welcome his mouthing off, as he keeps things interesting. And I like his defiant streak. He’s thumbed his nose at doubters who want him ripped, shredded, flat-abbed. Jarrell, I asked him, you off cheeseburgers right now? “Cheeseburgers,” he told me, his tone rising, vibing with glee, “we will all go for cheeseburgers after I whip Washington!”