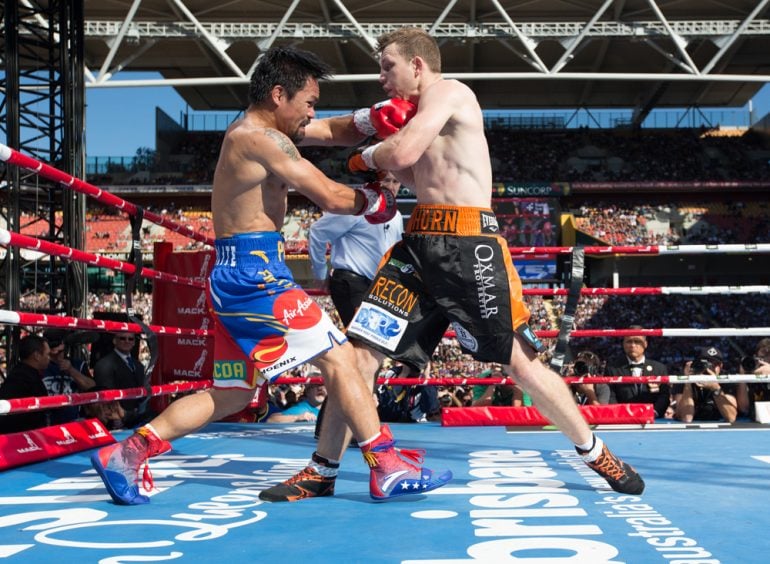 BRISBANE, Australia – Bob Arum appeared calm and collected as he sat on the dais between Queensland Tourism and Education Minister Kate Jones and Lord Mayor Graham Quark in a large room on the fifth floor of Suncorp Stadium.

While social media and sports commentators on ESPN — which televised the fight in primetime on Saturday in the U.S. — shouted robbery after Jeff Horn won a unanimous decision over Manny Pacquiao to lift the WBO welterweight title, Arum called for restraint.

Five years ago, when Tim Bradley Jr was awarded a split-decision winner over Pacquiao, Arum went off in the media center, calling the judging “outrageous.”

This time around, Arum kept an open mind about the scoring, explaining a win for either fighter could be reasoned.

“I thought it was a close fight, it could’ve gone either way,” said Arum, who will co-promote Horn’s future fights alongside New Zealand’s Duco Events. “There’s an argument for the fight being 7-5 Manny — 11th round was sort of close. I thought Manny gave away early rounds.

“Could it have been 7-5 for Manny? Yeah. But you can’t argue with the result.”

Few thought Horn, an Olympian and local prospect who rose to the number two ranking with the WBO, would last the 12-round distance, let alone be in the discussion for a win against Pacquiao. But at 38, the Filipino senator looked his age against the physically aggressive Horn, a 29-year-old. The Brisbane native used a fast start and a strong finish to create the right impression in the judges’ eyes, a verdict which Pacquiao did not vocally dispute.

“I think you cannot spend so much time as a senator and expect to be a world-class fighter,” said Arum, who has promoted Pacquiao since the mid-2000s. Arum adds that there is a provision for a rematch, but says it’s contractually obligated to happen in Brisbane. Still, he says Horn could one day make the trip across the Pacific to fight in Las Vegas and Madison Square Garden.

“He was quick when he put the combinations together but I felt like controlling the gap, that distance, made it a lot easier to see his punches coming,” said Horn, who was nursing a cut on his right eye at the press conference. “I could easily step back and dodge a few of them and counter with my own. On that aspect, just the size difference of both of us, it was a big advantage.”

Pacquiao (59-7-2, 38 KOs) didn’t show up to the post-fight press conference, the first time he didn’t appear to speak with media since his 2012 knockout loss to Juan Manuel Marquez. Instead, “Pacman” was getting stitched up from two cuts on his scalp he received in the sixth and seventh rounds due to head clashes (9 on the right side, 8 needed to close the laceration on the left).

Pacquiao’s trainer, Freddie Roach, said he would discuss the possibility of retirement with Pacquiao in light of the loss, but says he’s on the fence about whether the 22-year ring veteran should hang them up.

“I’m gonna have a long talk with him about that. Because I think maybe being a senator, being a fighter, both is maybe too much,” said Roach.

“I’m gonna give him my feelings on this because I’m a little bit in the middle because he didn’t fight badly, he did well in some of the rounds. He just wasn’t consistent enough for what I want.”

Roach stopped short of calling the verdict, which was widely panned on social media and among boxing observers, a robbery, but said he finds it hard to score fights he’s involved with.

“I thought it was a pretty close fight, I thought Manny had a really good round in the ninth, I thought it was maybe a two-point round and I just told Manny give me one more of them and the fight’s over, it’s done,” the Hall of Fame trainer said. “He just couldn’t do it. We lost the decision.

“I hear there’s a lot of people who think it’s controversial and Manny won and so forth, it went the other way and we have to live with that. Will we have a rematch? Maybe — I hope so.”

Pacquiao’s conditioning coach, Justin Fortune, said they had a “bad referee” and “crappy judges” but also laments that Pacquiao didn’t take the fight out of the judges’ hands.

“That’s boxing,” Fortune said. “You get given a gift sometimes, you get screwed sometimes, but when you come to someone’s house, you’re supposed to mess them up, make a statement and then never leave it in the judge’s hands.

The loss was Pacquiao’s first since his 2015 defeat to Floyd Mayweather Jr. Pacquiao is set to leave Australia on Monday morning to fly back to the Philippines, where he’ll have much to contemplate.