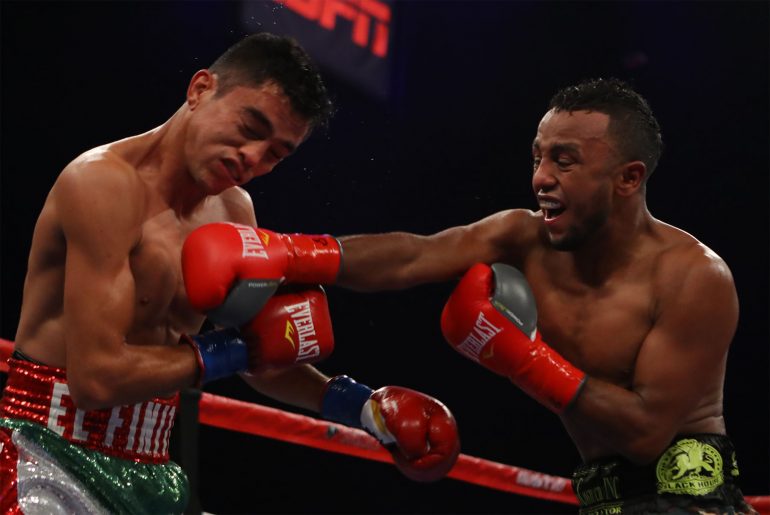 Oscar Negrete is making noise as he rises through the ranks.

“I want (Randy) Caballero next,” said Negrete. “Tonight with Sergio Frias, I knew I was winning the fight; it was more of waiting for either the knockout to come about or get the unanimous decision.

“I felt like my jabs were the most effective, because after watching his fight against (Vic) Darchinyan, our team noticed that he didn’t move his head a lot. There’s a couple more of these belts that I need to add to my career.”

Negrete, a native of Colombia, clipped Frias in Round 3 with an overhand right along the ropes that dropped him to the canvas, and continued to dish out a beating throughout the evening.

Negrete (17-0, 7 knockouts) pressured Frias and controlled the entire bout, outlanding his foe by a startling number of 301 to 96 connects, per CompuBox.

The 29-year-old stunned Frias (19-7-2, 10 KOs) in Round 8 and landed pretty much everything he threw — while the Mexican journeyman wildly shot back, game until the end — until the Frias corner finally stopped the bout with the fighter on his stool.

Negrete impressed and seems ready for a step-up bout at 118 pounds.

In the co-feature, lightweight prospect Ryan Martin remained undefeated with a 10-round unanimous decision over Marcos Jimenez.

“He was a tough, very defensive fighter,” said Ryan Martin. “It was hard for me to get him to open up because he would only throw a shot once he knew he could land it clean. This was my first time going the full 10 rounds, and by the eight, I was like ‘darn, he’s still standing?!’

“Overall, I felt that I could be more consistent with my style, and I wish I would have listened to my coaches more while I was in the ring, but I am satisfied with my performance and despite not getting the knock out, I’m glad that I got the win.”