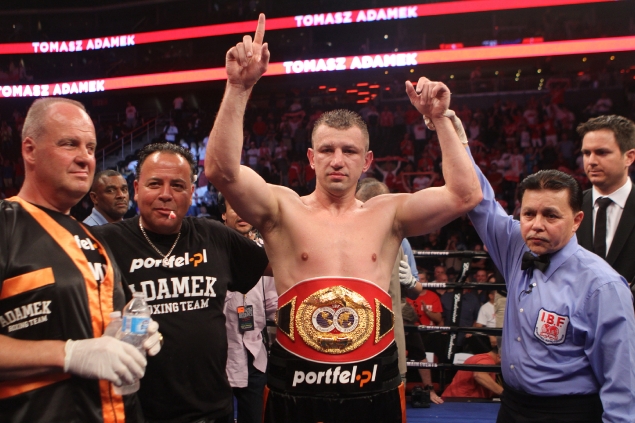 Poland’s most accomplished boxer, Tomasz Adamek, wasn’t content to leave his fans with the disappointing Eric Molina outing as his last impression.

Now a few months shy of 41, Adamek, a former WBC light heavyweight and IBF cruiserweight titleholder, picked a relatively safe opponent for his return in Haumono, who himself was 41 and hadn’t fought since being stopped by Joseph Parker in four rounds eleven months ago.

Adamek took advantage of Haumono’s lack of hand or foot speed, circling around him with his jab and landing in combination with accuracy. There were no knockdowns, and Haumono was never in serious danger of being stopped.

The crowd cheered the decision, and were in a far more celebratory mood than the crowd in Krakow, Poland, which saw Adamek leading on all three cards through nine rounds before being dropped and stopped by Molina in the tenth. Adamek, a pro since 1999, announced his retirement afterwards but had hinted at a return before making it official earlier this year.

“I feel fulfilled as a fighter,” Adamek told Bokser.org last year. “I gained the titles of the two divisions, defended them, I got the belt of Ring Magazine, so I cannot complain. The only thing I would still want to do is somehow find a good way to say goodbye to the fans.”

The rest of the night was also kind to Polish fans, as former WBO cruiserweight titleholder Krzysztof Glowacki rebounded from his decision loss to Oleksandr Usyk, stopping the previously unbeaten Hizni Altunkaya after the fifth round.

Glowacki (27-1, 17 KOs), of Walcz, Poland, scored two knockdowns in the fifth, convincing Altunkaya (29-1, 17 KOs), a Turkish born fighter now residing in Germany, to remain on his stool after the sixth.

Despite Altunkaya’s unmarked record coming into the fight, facing Glowacki was a massive step-up in competition from that which he’d been facing in Germany since turning pro in 2008.

Glowacki rose to prominence by spoiling the U.S. debut of Marco Huck back in 2015, and followed that up with a win over Steve Cunningham before being outboxed by Usyk last September. Glowacki is ranked no. 6 by THE RING at 200 pounds.

Also, Mateusz Masternak (39-4, 26 KOs) overcame a nasty cut over his left eye to defeat Ismayl Sillah (25-4, 19 KOs) by unanimous decision in their 10-round cruiserweight fight. The scores were 96-92, 95-93 and 95-93 for Masternak, who was ruled down in the eighth when his knee touched the canvas from a right hook counter from Sillah. Masternak has now won three straight since a points loss to Tony Bellew.