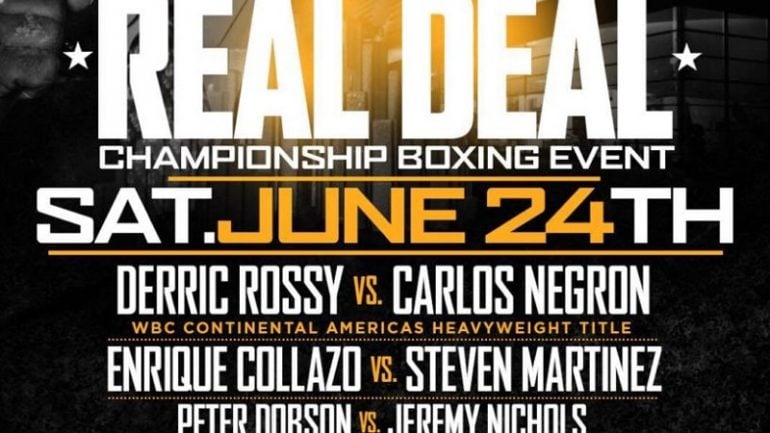 If there were a vote for Nicest Guy in the Game, I’m pretty sure heavyweight Derric Rossy, from New York, would get a bunch of votes.

The dude is just NICE. In all my years covering and interviewing him, I don’t recall hearing or detecting even a trace of bitterness or envy or other deadly sins of consciousness.

That is not to say he’s a robotic sort who just throws out positivity, light and fluffy bromides, which leave a listener soothed but bored from lack of substance. He will speak on his lot in life as a journeyman heavyweight and the downsides of that status. However, he does this in an upbeat way. Bottom line: He’s hard, if not impossible, to root against.

You can get a chance to see more of the scrapper on Saturday night, when he engages in a main event tango against Carlos Negron, in the kickoff event of the new Evander Holyfield promotional company.

Rossy, age 36, holds a scuffed up mark of 31-12 (15 knockouts), if we are being honest. Lotsa losses there, on the surface, but if you have watched many of those “losses,” you know he’s not gotten love from the judges all that often when the cards are tallied. That is part and parcel with being a “B-side” guy, someone brought in to test the up ‘n’ comer and, ideally, lose to that rising potential future star.

Tomorrow at Freedom Hall in Louisville, Kentucky, Rossy is not seen as the B-side slotted boxer. He’s the A-side, being he’s part of The Real Deal Promotions stable, which is overseen by his promoter, Sal Musumeci.

The test run will screen on CBS Sports Network and you can also watch it live on the Real Deal website.

Rossy said things have been positive and buzzy in this fight week, in Louisville. He arrived Wednesday and met the Governor of Kentucky Matt Bevin today. “The community has been awesome, really welcoming. We had a press conference Thursday at the Muhammad Ali Center, so you had the presence of “The Greatest,” and then you had Holyfield, for God sake! Holyfield has been great; he’s been good to everyone across the board. And he’s a really good speaker. He’s a really good guy. And that’s extremely important because people can be jaded because of past events in boxing, if they don’t really follow it day-to-day. They input their own thoughts…and when they see Evander, a genuine and humble guy, who just wants to help people out, it’s great for the sport. It’s huge for boxing. He’s not just a face; he’s a person of real value.”

I asked Holyfield what he wants to accomplish with this first card. “I want to bring fans back to the sport by promoting competitive, quality fights, like when I stepped into the ring as a fighter,” said Holyfield, who was just inducted into the International Boxing Hall of Fame this month. And what two fights are he most pumped about? “For those who tune in, they will see all great fights. You really cannot single out any two,” said the ex-fighter, smartly negotiating a question akin to asking which two of your five kids you like best.

Four fights will be screened on CBS Sports Network. Welters Peter Dobson and Jeremy Nichols, young unbeatens, will kick things off. Then, ex-Top Rank boxer Toka Kahn Clary takes on Angel Luna in a super feather tango. Ex-Salita Promotions banger Steven Martinez debuts for Holyfield at 154 against fellow New Yorker Anthony Lenk, who hasn’t fought since 2013. Then Rossy meets Negron, with a WBC regional title up for the taking.

The last few days, Rossy, who turns 37 on July 2, has bumped into foe Negron (19-1, 15 KOs), Puerto Rico, 29, a few times. “He’s actually a really good guy,” Rossy said, and I started chuckling. “I know. I can’t help myself,” the amiable heavyweight replied, “but, the night of the fight, that goes out the window. He’s been fighting at heavyweight, after fighting at cruiserweight. He’s in shape, doesn’t look sloppy at the weight. And I’m in shape, ready to mix it up. I’m ready to go. I think you’re going to see a pretty good fight. I think I will wear him down, mentally and physically. My experience is my number one edge. He hasn’t fought the same level of competition I have. It just feels great for me right now. I feel at ease. Things seem to be kind of flowing. There’s not something jamming things up. Whether it’s the accommodations or not being picked up at the airport. I’m going to use that energy going into the ring tomorrow.”

Trainer Seligson has the same sort of personality as Rossy, as anyone at Gleason’s will attest. He is accordingly enthused and upbeat about the fight versus Negron. “We are excited for the opportunity to fight on Evander Holyfield’s inaugural boxing card in Louisville, Kentucky,” Seligson said. “The people here have been extremely welcoming to us.”

I asked about the Rossy regimen, from today into tomorrow…

“Lunch, dinner, I keep it simple,” Rossy continued. “My parents came to town, so I will meet them, have some chit-chat and laughs, then off to bed. Tomorrow, I get up whenever I wake up, have a good breakfast, walk, stretch, relax…then it’s go time. For my fans and everyone out there, my message is tune in! The whole fight night will be exciting. Tune in to watch me; it’s definitely going to be a great fight. And a win here, we definitely have a plan of progression. Sal, my promoter, is always like 20 steps ahead. We try to keep him at two,” he said, chuckling, “but the plan is to get me into the rankings, and fight one of the Top 10 guys, and we’re shooting for a title. I’m still hungry, still got the fever. I’m gonna go for it. It starts tomorrow night. Just tune in!”

The main event should start around 11:45 PM, or earlier, depending on earlier results.

My take: I will be rooting for Rossy to win because he deserves it, if I’m being brutally honest. And same goes for the Holyfield endeavor; it’s good for boxing to have this solid role model promoting the sweet and savage science.

Michael Woods is always 20 steps ahead but copy editor Coyote Duran tries to keep him at two. If he doesn’t, then Woodsy will leave Coyote with the dog on a leash and in charge of the Woods Gurlz and, by then, Coyote’s already been drinking and that’s kind of a mess. Long story short, Woods is in a lot better shape than his editor.