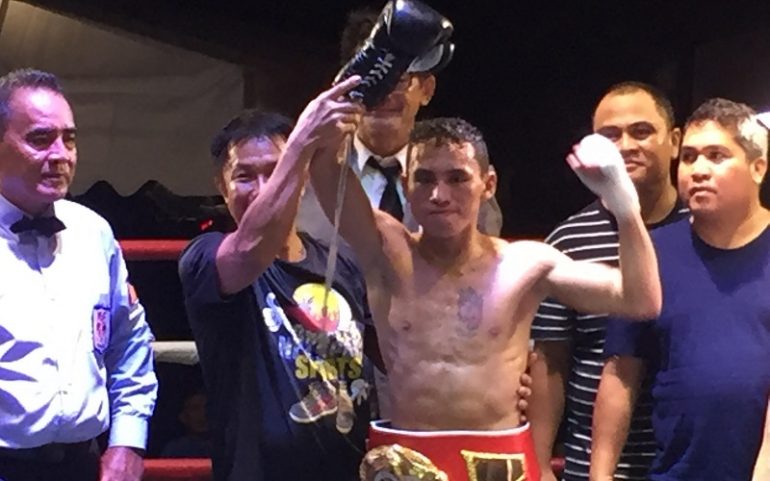 CALAMBA CITY, Philippines – Robert Onggocan stood up to the hardest shots from Marjun Pantilgan for nine rounds, dishing out three for each one that his heavier punching foe could land.

After the bell for the penultimate round, Pantilgan retuned to his corner shaking his head, even as trainer Christopher Tepora and referee Silvestre Abainza gestured that there was just one more round remaining.

Onggocan then leapt onto the corner turnbuckle and covered his face in prayer. It was that kind of night for Onggocan (9-1, 5 knockouts) on Saturday at the town plaza in Calamba City, Philippines, as Onggocan retained his IBF youth flyweight title, handing Pantilgan (14-5, 11 KOs) the first stoppage loss of his career in front of hundreds at the outdoor venue.

Once again, body punching got the job done for the 21-year-old Onggocan, just as it did for him in January, when he upset Iwan Zoda in Indonesia to put himself on the map. Onggocan hurt Pantilgan badly to the body with a right hook, then continued to pound away with both hands to the midsection before the bell gave Pantilgan both a reprieve and a way out.

There were tense moments in this fight for the Dapitan City, Zamboanga del Norte native, including a left hook to the body which hurt Onggocan momentarily in the sixth round, and a few buzzing counters in a wild third round exchange, when Onggocan went for an early stoppage.

Otherwise, the fight all went Onggocan’s way as he popped in straight lefts through the guard of Pantilgan whenever he had the inclination, showing his speed and accuracy, if not much power.

“I saw he kept looking to the corner. He wanted to quit,” said Onggocan afterward. Onggocan says he’ll take a two-week vacation in his hometown to buy his father Ronnie a motorized tricycle, so he can earn a living away from the backbreaking construction work he’d been doing.

Dino Olivetti, Onggocan’s trainer and promoter, would prefer to take it slow with Onggocan, who only started boxing four years ago.

“More tuneup fights. He’s not yet ready for the world rankings. We’ll just wait for the right time,” said Olivetti, who promoted the fight with the help of the Calamba City government, as part of the two-week long Buhayani Festival.

In other results, Warren Mambuanag (11-7-2, 3 KOs) scored a minor upset, knocking down Venson Delopere (5-2-3, 2 KOs) in the third round to send him to a second straight unanimous decision defeat in their 10-round junior lightweight fight.

Mark Rey Taday (8-2, 4 KOs) won a unanimous decision over Vincent Bautista (5-8-4, 1 KO) in their 10-round junior flyweight fight. Taday has now won his last four fights, including an upset over the 7-0 Carlo Caesar Penalosa in February.

A six-round fight featuring the return of former IBF flyweight titleholder Amnat Ruenroeng was originally slated for the card but was canceled earlier in the week, with the promoter and matchmaker citing an unspecified injury.