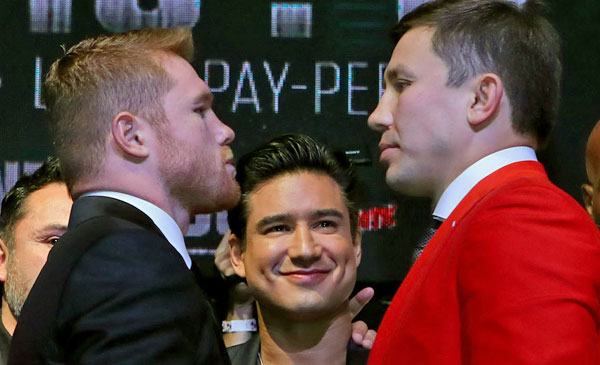 LOS ANGELES — For all the talk about Canelo Alvarez ducking Gennady Golovkin, could the timing of the fight be better?

Had it taken place immediately after Canelo beat Miguel Cotto at a catch weight of 155 pounds to win the RING championship in November 2015 – when talk of a Canelo-GGG clash began in earnest – Golovkin would’ve been a prohibitive favorite to win.

Now some knowledgeable observers are picking Canelo to prevail. A lot can change in a relatively short time.

Canelo was still essentially a junior middleweight and Golovkin was on one of the most dominating streaks in recent years, having stopped 21 consecutive opponents, at the time Canelo fought Cotto.

The Mexican star raised the ire of many fans when he opted to defend his title against Amir Khan and then face Liam Smith for a 154-pound title rather than defend against Golovkin – after indicating GGG was next – but he didn’t consider himself a full-fledged 160-pounder at that point.

It wasn’t until he met Smith, this past September, that he knew with certainty that he was a middleweight. He said that in the late rounds of the fight, in which he stopped the overmatched Englishman in nine rounds, he felt weakness in his legs.

That was his cue: he was ready to take the next step.

“I realized making that weight was taking too much of a toll on my body. I realized I had to move up in weight,” he said on the final leg of the promotional tour for his September 16 showdown with GGG.

Canelo felt like a new man on May 6, when he fought Julio Cesar Chavez Jr. at a catch weight of 164.5 pounds and won every round on all three cards. One indication of his leg strength and energy level: He didn’t bother to sit down between rounds.

Meanwhile, since the Canelo-Cotto fight, the perception of Golovkin changed. That knockout streak was at 22 when he faced Kell Brook in September. GGG made it 23 when he broke Brook’s eye socket, but we saw moments of vulnerability that we had never seen before.

And then the streak ended against Daniel Jacobs in March, when Golovkin won a close, disputed decision to retain his three sanctioning-body titles.

He remained one of the best fighters of the world but, it seemed, he was no longer superhuman.

“I think those weaknesses have always been there,” Canelo said. “We just hadn’t seen them before because his opponents were perfect opponents (for him). They stood right in front of him to be hit. Now you had an opponent who moved a little and it gave him problems. That’s why he struggled.

“I’m a versatile fighter. I can do it all, I can change up. I’ll do whatever has to be done … to stay a step ahead of him.”

Golovkin was asked about such perceptions, which don’t seem to bother him. “I’m very comfortable,” he said. “Seriously, I know my (abilities), I know my power.”

The only thing that matters to the 35-year-old Kazakhstani is that he has a date with Canelo in September.

And, of course, that should be no surprise given his history. Golovkin, who has been fighting professionally for 11 years, had gained the unenviable reputation as the most-avoided boxer in boxing. It got to a point where he had to wonder whether he’d ever get anything resembling a superfight.

Thus, he couldn’t be more pleased to have landed Canelo.

“This is the story of my career,” GGG said, referring to his frustration. “It wasn’t my fault. I remember the situations … Sergio Martinez, Felix Sturm, Miguel Cotto, Canelo. Now I have the real deal fight. I’m excited.”

So are the fans.

A few years ago, a talented junior middleweight vs. the most-feared figure in the sport would’ve been a good matchup. Today, a more-developed, legitimate 160-pounder vs. an excellent fighter deemed to have flaws is a far more intriguing showdown.

From both a competitive and business standpoint, the timing was perfect.

“The fight arrives at the best moment,” Canelo said. “I’m more mature, a better fighter with more experience than, say, two years ago. It couldn’t have come at a better time.”