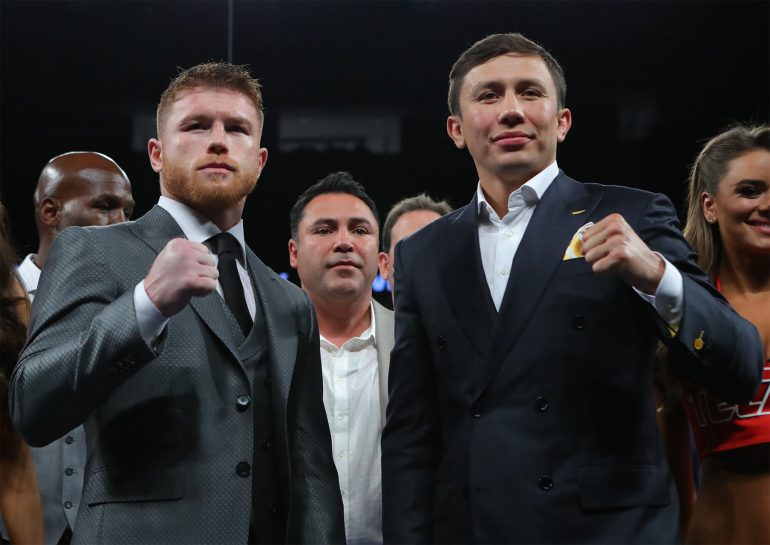 NEW YORK — IBF/WBA/WBC middleweight titlist Gennady Golovkin is always in a cheerful mood but he appeared even more at ease than usual Tuesday.

That’s because he finally feels it – It’s here.

His long-awaited fight with THE RING Magazine champion Canelo Alvarez, the type of marquee event “GGG” has dreamt of, since he punched his way onto American airwaves five years ago, finally feels real with the promotional tour underway for the September 16 championship clash.

“The last two, maybe three years, I wanted this fight,” Golovkin said. “I’m very excited…Every day, I learn. Right now, I feel great. My body, because I’m 35, is old (but) I believe, on September 16, I’ll look my best. I understand the situation. I understand it’s my biggest fight; it’s my biggest opponent.

“It’s a huge day for my career; I need this day. Right now, I feel on top. My energy – I feel like Superman right now.”

Canelo may be the biggest name opponent of GGG’s career and he’s certainly the best foe on paper, too. After all, Canelo is the only fighter rated in The RING’s pound-for-pound Top 10 whom Golovkin will have faced.

Golovkin (37-0, 33 knockouts) was long criticized for his level of opposition but through no fault of his own. That question mark was remedied in March, when Golovkin faced Daniel Jacobs at Madison Square Garden. Jacobs, a bigger, faster opponent, was able to use movement and angles to befuddle “Triple G.”

Media members at ringside were split on who deserved the decision.

The fight showed some weakness in Golovkin’s game but the Kazakh is pleased that it happened. Energized, even.

Indeed, this was the first time in 37 professional outings in which GGG saw the 12th round. He knocked Jacobs down in Round 4 and when the Brooklynite continued on, GGG didn’t panic. Instead, he found a way to adjust and eke out a decision.

It also surely didn’t hurt matters that Golovkin looked vulnerable when it came to securing the bout with Canelo. The Mexican star, while more highly regarded than Jacobs, also possesses a style more suited to Golovkin’s liking.

“I think Danny being physically bigger and heavier and fast (with) great combinations,” Golovkin’s promoter, Tom Loeffler said, “I think probably with Canelo, like Gennady says, he’s not going to have to look for Canelo; Canelo is just going to be there. Danny was moving quite a bit, giving a lot of angels, lot of lateral movement.

What very well could be a boring 12-round fight is Floyd Mayweather Jr.’s fight against UFC star Conor McGregor, which figures to gobble up media attention just three weeks before Canelo-GGG.

When asked if he’ll watch the matchup, Golovkin looked at his Hublot watch and answered, “Maybe, if I have time. Maybe I go and play hockey.”

Golovkin will be hitting his peak in training during that time and he knows. He realizes a victory over Canelo likely cements him as not just fighter of the year but also likely stamps his place in the Hall of Fame down the road.

“I believe this is first step to history,” Golovkin said. “This time, this life, Canelo is Canelo. Seriously, he looks good but I am a champion. I don’t know who stays close (or) who (is ranked near) us. I don’t know who’s number 3, number 4, number 5 (at 160 pounds). Last five years, he’s beat everybody. Right now, I think I’m first class. Canelo is special. He is like a hero.

“I come back home from Kazakhstan three days ago. I saw fans; I saw children with eyes (big and starry). They look at me like I’m Superman, like an Iron Man. This fight is a hero’s fight.”

And if the pair’s meld of styles lives up to expectations, they could be linked forever in history.