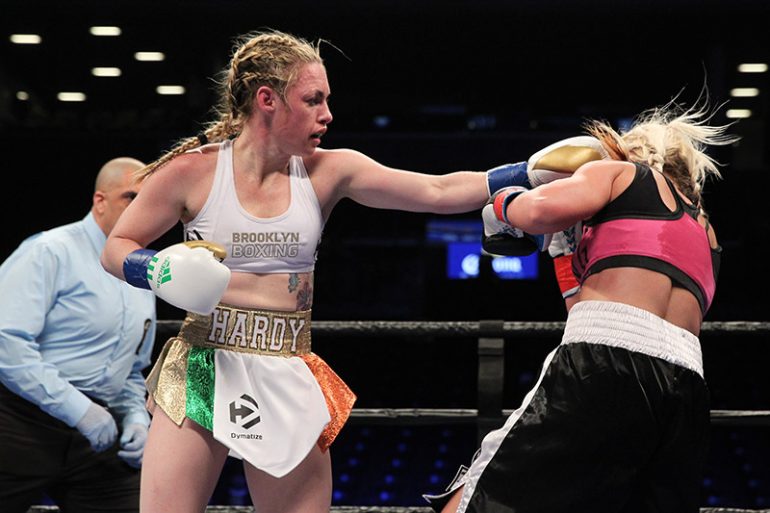 There were butterflies in the gut last week, slam dancing, and, this week, they are pretty chill.

The presence of those “nerve” agents has been put to rest because it now time for a different mode for undefeated featherweight female contender Heather Hardy.

“I had the butterflies last week but now it’s all fight week business,” said the Brooklyn resident, who, on Saturday night, will be officially able to put “boxer/mixed martial artist” on her resume. “I’m ready, Woods.”

That’s because she’ll step into a cage, rather than a ring, and will have to be ready for a multi-faceted, four-limbed attack, rather than focusing on the customary two-handed missiles which she’s been dodging, to good effect, since turning pro as a pugilist in 2012.

Hardy (20-0, 4 knockouts in boxing) is 35 and on the cusp, probably, of getting that signature chance, at a real-deal title, maybe the WBC version at super bantamweight or featherweight.

And she’s adding this skill, MMA, to her resume, not because she wants to be able to boast a beefier curriculum vitae but out of economic necessity. The wheels of change and sustainability are turning slowly within the women’s boxing realm and she doesn’t have a decade available to do this slow waltz. She’s got bills to pay now. New Yorkers who aren’t rolling in it, they know summer as a time for frolic, yes, but are also bloated Con Ed bills. Electric bills are a bitch over here. She’s also got a teen daughter who wants some of that trendy clothing now, too.

Hardy has been training for close to a year in MMA, learning Brazilian the Jiu-Jitsu, the judo, the wrestling, the Muay Thai, the grappling transitions, the takedown defense…she’s tried to cram five-to-seven years worth of learning into this span.

Her teaching has been top-tier. She’s been learning from the Gracie gang at Renzo Gracie Fight Academy in New York City and traveling out to Long Island to get extra prep. 4:30 a.m. wake-ups, long travel sessions, do a workout, hustle back to Brooklyn, do a boxing workout, cram in some training sessions to make the ends kind of meet, try and eat right to keep up strength as the candle is being burnt at both ends and the middle. The muscles ache; they bark at her at night and, hell, in the morning too but she shushes them, knows this has to happen. She has to get ready for this MMA fight because, economically, it’s her best path to a patch of a pot of gold right now. She will make more on Saturday night, for fighting at Madison Square Garden on a Bellator promotion, than she’s made in one night inside the boxing realm. The “new” sport of MMA is more welcoming of and rewarding to women than within boxing, so, even though there is a new degree of uncertainty in the mix, being that she’s 0-0 in MMA, Hardy at least can take solace in the fact that the check will keep Con Ed at bay til the end of the year and then some.

I wondered, what is her degree of nerves as we count down to Saturday and her fight against 4-5 Alice “The Soccer Mom” Yauger? How much self-doubt is present?

“I feel confident because I know how to fight,” Hardy said. “I wouldn’t exactly submit to a BJJ tournament but I do like my chances against someone with real experience as long as I can use my hands. Daniel Gracie told me his uncle once said, ‘If you punch a black belt in the face, he becomes a brown belt. Do it again, a purple belt.’

And what do we know about this foe?

“Eff this girl. She can’t beat me. I don’t care what she knows.”

OK, that sounds like the Hardy to whom we are accustomed. She’s holds what her mom told her early on in her head: “Fight like that girl stole money from you.”

Yauger is 39 and a Texan. She lost her Bellator debut against Jess Middleton in January. She likes to stay on her feet, bang with hands, seems well suited for Hardy. Middleton backed her up with a long jab but Soccer Mom proved her heart is as good as her nickname, hanging tough all the way through three rounds, before losing a unanimous decision.

So, if you want to check out the Soccer Mom versus the Brooklyn Single Mom fighting for personal economic health, tune in to SPIKE on Saturday night. The moms are the first televised fight when the show kicks off at 8 p.m.

I will be watching and, I confess, will be thinking: black belt to brown belt to purple…

And also, watching while tipping my hat to the hard-working moms and dads literally fighting to make their ends meet.

Michael Woods never has to step foot into an MMA cage to know that, when it comes to holding up his pants, going from a black belt to a brown belt to a purple belt would make one Jessica Mabli-Woods justifiably question his sense of fashion.