Commission director sees no reason Ward-Kovalev result will be overruled 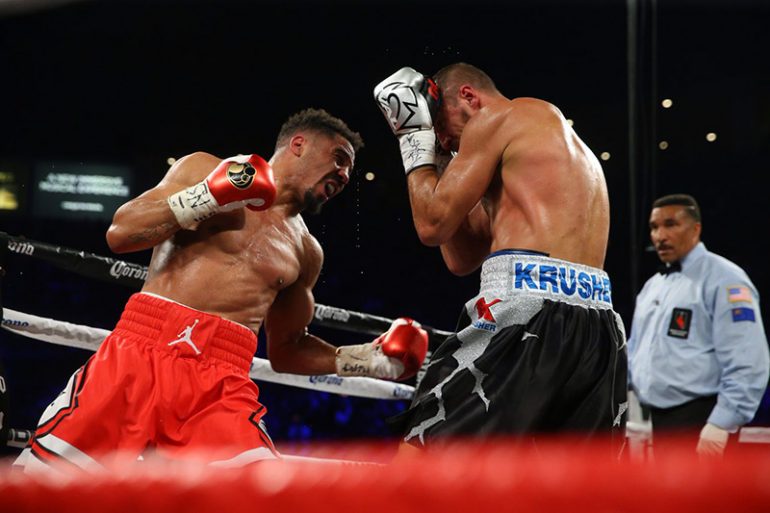 LAS VEGAS — If there wasn’t some whirlwind of controversy circling behind after a big fight then, well, it wouldn’t be boxing, would it?

The finish came after Ward connected with a missile of a right hand that sent Kovalev reeling around the ring. Ward (32-0, 16 knockouts) went back to the body with some devastating blows, and after a shot landed square on the belt-line of a doubled-over Kovalev, referee Tony Weeks halted the bout.

Main Events CEO Kathy Duva, who promotes Kovalev, was apoplectic over the result and said afterward she planned to file an official protest Monday with the Nevada State Athletic Commission.

“I’m still having a hard time processing what I just witnessed,” Duva said at the post-fight news conference. “I saw someone who should’ve been disqualified get his hand raised.

“(Kovalev) got hit with three low blows — four actually — in the last round,” Duva claimed. “We asked the commission for an instant replay analysis. They did not give it to us. … If you look at the instant replay, which the commission refused to look at tonight, you see the back of Sergey’s cup go up one, two, three times. I’ve never seen someone knocked out on a low blow until tonight. And I have to say, I hope I never have to see it again.

” … When the fight ended, Sergey was up on one of the cards and he was down by a point on the other two. The fight was very close. At the beginning of the round, a low blow was thrown. The referee did not protect Sergey. He waved him back to fight. Then the damage started happening. He got into that corner and he (was hit with) three low blows. When you see the replay, they’re hard to miss. It’s a shame. It’s a shame.”

Ward’s final blow strayed low, but Kovalev was in big trouble well before that. Kovalev was in survival mode after the right hand landed, and his body language was that of a defeated man. He wasn’t throwing punches back, and he bounced off the turnbuckle post shortly before Weeks intervened and stopped the bout.

Nevada State Athletic Commission Executive Director Bob Bennett told RingTV.com on Sunday that he sees “no reason the result will be overruled,” though the protest will go through the process this week.

He pointed out that Kovalev was rocked by a legal, clean right hand to the jaw earlier in Round 8, and that Kovalev absorbed “a barrage of punches and several body shots that hurt him” at the finish. There’s also a reason, per the rules, instant replay wasn’t utilized on the final blow.

“I explained to (Duva) the instant replay process, that I would go ask the referee to give the fighter and Main Events the benefit of the doubt,” Bennett said. “I asked Tony Weeks ‘do you want to take a look on instant replay or are you satisfied (the punches) were on the belt or in close proximity?”

Weeks replied: “They were on the line, they were on the belt, and they were good punches, and I don’t need to review instant replay because of the punishment that Kovalev was taking. He clearly lost the fight and I stopped it.”

Based on Nevada’s regulations and statutes, if the referee doesn’t feel instant replay is needed, that’s the official’s call.

Bennett also took notice of Kovalev’s body language, and mentioned that Kovalev “turned away from Ward in Round 7, and then backed up instead of going after him. That almost could be perceived as ‘I’m done.’ Or maybe in fairness to Kovalev, maybe he turned away because he hurt his ankle.”

Did Weeks stop it a tad too soon? Perhaps. But Kovalev didn’t protest until much later when Ward’s hand was raised.

“He’s really lucky, ‘Son of Judges,'” Kovalev (30-2, 25 KOs) said (a play on Ward’s moniker, “Son of God”), referring to the controversial decision in the first meeting in November. “He didn’t hurt me. I got tired, but I still wanted to fight. It’s boxing. I could have continued fighting, but I don’t understand what happened.

“Why did Tony Weeks stop the fight? He punched me low blow already a few times during the fight. … He didn’t let me continue to fight. It was an illegal stop. I believed and trusted Tony Weeks, but he did a wrong decision in stopping the fight.”

Weeks is considered one of the best referees in boxing, and he did warn Ward for hitting below the belt in Round 2. Ward laughed at the claims, and said, “If we’re gonna talk low blows, we gotta talk rabbit punches.

“I really don’t have a lot to say about whatever they said,” Ward said. “Whatever the excuses were this time, I just don’t have the energy.”

Kovalev also socked Ward with an elbow — it was simply a physical, inside fight at times with plenty of wrestling and headbutts from both sides.

Main Events can protest all they want, but it’s unlikely to change anything.

It was Ward who broke Kovalev — mentally, physically — and solidified his status as the best pound-for-pound fighter in the world.