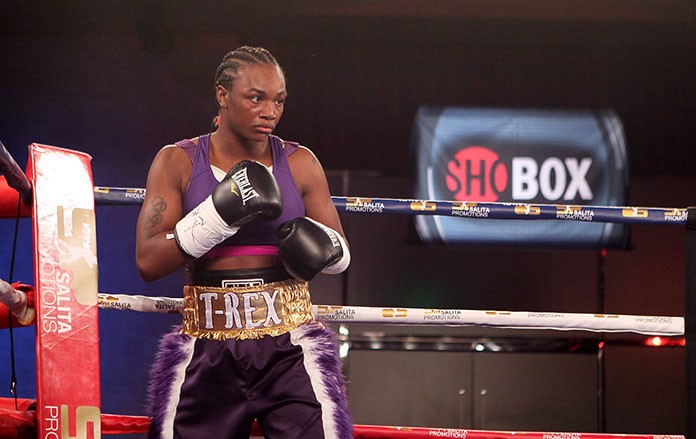 Two-time Olympic gold medalist Claressa Shields defeated an overmatched Sydney LeBlanc by unanimous decision in front of a standing-room-only crowd at the Masonic Temple in Detroit, Michigan, on Friday. Scores were 80-72 across the board. The bout was streamed live around the world by FightTyme.com.

Shields (3-0, 2 knockouts) resembled a human tornado in the opening round, throwing a ton a blistering combinations and hurting LeBlanc several times in the round and causing referee Frank Garza to take a close look. LeBlanc (4-2-1) somehow survived the two-minute round but her face looked worse for the wear.

Shields was a bit more measured in the second round, throwing fewer punches but connecting with more accuracy, causing LeBlanc’s face to swell badly. As the round came to an end, LeBlanc’s corner was about to throw in the towel but the game Louisiana boxer, who goes by the nickname “Lady Rocky,” urged her corner to allow her to go back out.

Wanting to perform well for her hometown crowd and with Tommy Hearns and her Olympic teammate Shakur Stevenson in attendance, Shields let her hands fly again in the third round, catching LeBlanc flush. LeBlanc spent the entire round covering up without throwing any punches. Shields, who is looking more mature than her pro record would suggest, started going to the body and got Leblanc to start dropping her guard.

Shields did her best to get LeBlanc out of there, but to no avail, as LeBlanc was more interested in lasting against an Olympic gold medal-winner than trying to actually win the fight. By the fifth round, Shields restrained herself from being reckless and started to cut the ring off and throw measured combinations to hurt Leblanc.

Shields had LeBlanc hurt badly again in the sixth round after landing a huge left hook following a flurry of big power shots. LeBlanc tried to throw back and ate another left hook that sent her into the ropes. Shields followed up with a body shot and almost stopped LeBlanc again.

There wasn’t any quit in LeBlanc, who took the fight on only three days’ notice after Shields’ original opponent, Mery Rancier, was unable to travel to the United States due to an issue with her visa.

The bout was Shields’ second in Detroit, which is just an hour south of her home in Flint.

“I’m the only good news you hear about on the news in Flint,” Shields said before the bout.

Shields is not only the first American boxer to win gold in consecutive Olympic Games but was also the first female boxer to headline a card on a premium cable network when she stopped Szilvia Szabados in four rounds in March on Showtime.

Shields announced after the win that she plans to challenge for her first world title on August 4.

Zubov dominated the one-sided bout by establishing his jab early and keeping Banks off balance. Zubov moved well and had Banks hurt several times in the bout but was unable to put the unsteady Banks away. By the seventh round, Banks had his hands virtually down by his waist and was clearly gassed. Zubov continued to pop the jab and the occasional right hand to prevent getting hit by anything in return.

Zubov, who now calls Detroit home, is trained by Javan “SugarHill” Steward of the Kronk Gym.

Also on the card, welterweight prospect Bakhtiyar Eyubov (13-0, 11 KOs) dropped Cesar Soriano (27-36-1, 16 KOs) three times in the opening round until the referee had seen enough and called a halt to the action. The official time of the stoppage was 1:41 of Round 1.

The 30-year-old Eyubov stormed out of his corner to land a gigantic left hand to drop Soriano in the first 10 seconds of the bout. Soriano beat the count but had not fully recovered to withstand another flurry from Eyubov and went down from a body shot. Eyubov then finished Soriano off with another left hook upstairs, completely overwhelming the Mexican.