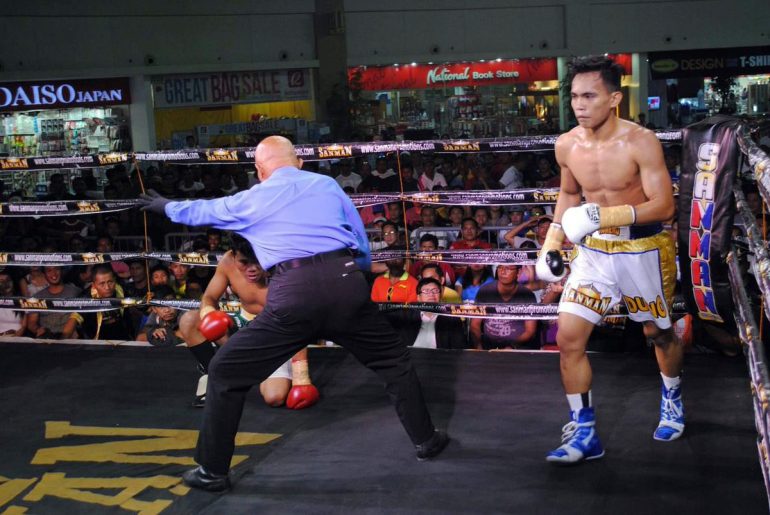 Romero Duno walks to a neutral corner after scoring one of his four knockdowns against Jason Tinampay. Photo / @GoldenBoyBoxing
10
Jun
by Ryan Songalia

MANILA, Philippines – Lightweight prospect Romero Duno was like a hot knife through butter, tearing through Jason Tinampay in his homecoming fight on Saturday, dropping him four times in the second round to score a technical knockout in the eight-round main event at the Robinson’s Mall Atrium in General Santos City, Philippines.

The fight was stopped after Duno (14-1, 13 knockouts) pounded the midsection of Tinampay (8-5-1, 7 KOs), with all knockdowns being the product of body punching, marking a successful return to the ring in his native country the Philippines after scoring a second-round upset knockout of Christian “Chimpa” Gonzalez in Los Angeles this past March.

The loss was Tinampay’s fourth stoppage in his previous six fights, and earliest ever exit in a fight.

“Great victory for Duno. Next is the U.S. invasion,” said Sanman Promotions’ Jim Claude Manangquil, who handles Duno alongside Golden Boy Promotions, which signed Duno after the victory over Gonzalez.

“Duno really improved a lot. He is a far different fighter when he came to Sanman a couple of years ago. He is a world class fighter and he showed his last victory in L.A. was not luck.”

Duno, 21, of Tagum City, Philippines will head back to Los Angeles later this month and is expected to fight again in August or September, Manangquil says. (READ: Romero Duno: From runaway student to knockout prospect)

Aston Palicte (23-2, 19 KOs) had a tougher outing against the durable John Mark Apolinario (18-9-3, 4 KOs), scoring two knockdowns in the eighth and final round to score the stoppage in their bantamweight fight. The final knockdown was scored on a left hook and left Apolinario face down, where the referee finally stopped it.

Palicte, who is rated number 6 by the WBO, number 12 by the IBF and number 12 by the WBC at 115 pounds, will head to the US for a fight in early September, his manager Jason Soong said, with a “former world champion” being discussed as a potential opponent.

The scores were 97-93 on two cards for Landero while the third was 96-94 for Saludar, a bronze medalist at the 2010 Asian Games, and who as a pro knocked down Kosei Tanaka in a 2015 challenge for the WBO strawweight title before losing by sixth-round knockout.

It wasn’t all bad for the Saludar clan as older brother Froilan Saludar (25-2-1, 16 KOs) scored three knockdowns of Salatiel Amit in their flyweight fight before stopping Amit at the 1:28 mark of the ninth round.

Filipina-American Casey Morton (5-0-3, 0 KOs) made her Philippine debut on the card, scoring a knockdown of Phannaluk Kongsang to win a six-round unanimous decision.