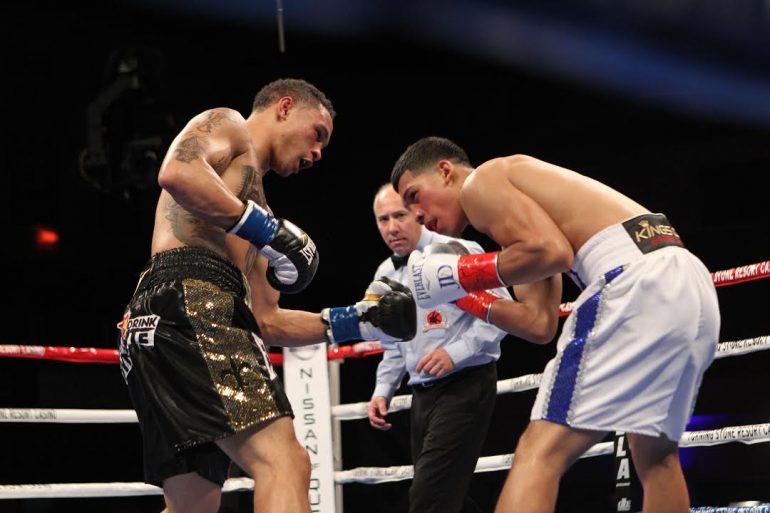 VERONA, N.Y. — Regis Prograis didn’t just graduate from prospect to contender status Friday, he made the jump seamlessly and brutally with a second-round stoppage of Joel Diaz Jr. in the main event of “ShoBox: The New Generation” at Turning Stone on Friday of the International Boxing Hall of Fame induction weekend.

The fight was billed as a throwback to the halcyon days of the series: two highly regarded undefeated prospects fighting for a chance to move on to “Showtime Championship Boxing.”

And Prograis did just that.

“Rougarou” scored four knockdowns in Round 2 — the compact overhand left inflicted most of the damage — and Diaz never had a chance to breathe. Each time Diaz fell, Prograis was there to violently attack him and drop him one more time. Diaz did a backward somersault on the third knockdown, and another devastating left hand ended matters at 2:55 of Round 2 when referee Mark Nelson stopped the fight.

“Another opponent I ran through, but I run through everybody,” Prograis (20-0, 17 knockouts) said. “I’m coming for everybody at 140 (pounds), I’m the boogeyman of the division.”

Prograis, 28, called out Terence Crawford and Adrien Broner by name, and it isn’t just bravado. The aggressive southpaw, with power in both hands, looks like the real deal.

He picked apart a top prospect with ease, and when he had Diaz hurt, there was no doubt he would finish him.

Prograis’s swift upper-body movement gave Diaz issues from the opening bell, and his power jab opened up lots of lighting-fast combinations. Diaz’s face was flush red in Round 1, the result of a series of straight lefts, and the fight wouldn’t last much longer afterward.

Once Diaz (23-1, 19 KOs) opened up, it was clear he couldn’t sustain the Cajun’s power, and though the 25-year-old Californian was game and kept jumping to his feet, he was no match.

“He’s not a ShoBox fighter anymore, he’s a problem for any fighter in the world,” promoter Lou DiBella told RingTV.com, adding that Showtime has rights to televise Prograis’ next fight. “He’s a beast. The other kid was game and threw some bombs, but tonight was a statement. He could fight (Viktor) Postol in an eliminator next. He walks through Postol. He’s going to be in there with the big boys in the 140-pound division after his next fight.”

A title eliminator with Postol? If that’s next, Prograis has truly graduated indeed.

In the co-featured bout, Steve “Mr.” Rolls remained undefeated with an eight-round split-decision victory over Demond Nicholson. One judge scored it 77-75 for Nicholson, overruled by tallies of 77-74 and 77-74 for Rolls (16-0, 9 knockouts).

The Canadian dropped Nicholson (17-2-1, 16 KOs) in Round 1 of a middleweight action fight, with many tough-to-score frames.

Jon Fernandez impressed in the ShoBox opener with a devastating knockout of Juan Reyes in Round 2. Fernandez, co-promoted by Lou DiBella and former two-division champion Sergio Martinez, busted open Reyes’ left eye in Round 1 and had his way. The Argentine unloaded with right uppercuts on the wild-swinging Reyes (14-4-3, 2 knockouts), and finally landed a straight right on the button that rendered his foe unconscious (the first time Reyes has ever been stopped).

Fernandez (13-0, 11 KOs) threw an astonishing 210 punches in less than two rounds, and with tremendous height for the 130-pound division at 5-foot-11, the 21-year-old is quickly developing into a bona fide blue-chip prospect.