Ann Wolfe: ‘In female boxing, I am Wonder Woman’ 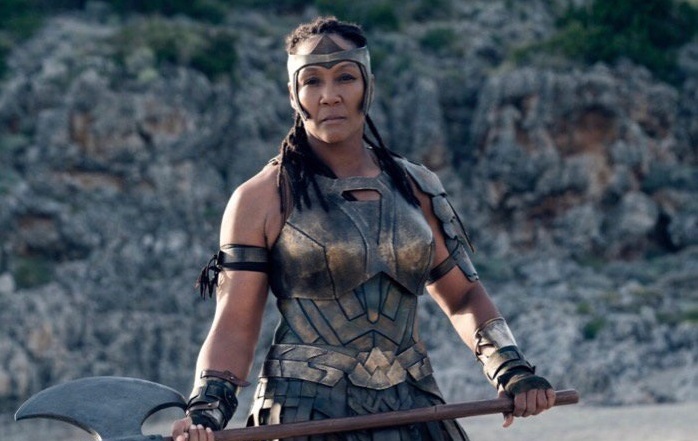 The call came out of the blue, a massive surprise, being that Ann Wolfe had never acted before. Maybe it shouldn’t have been that surprising, come to think of it; Wolfe is a compelling person on film, possessed of a gritty charisma that suggests a mix of badassery and softness, sometimes deeply buried.

Producers of the Hollywood epic “Wonder Woman,” playing everywhere now, wanted to know if she’d be available to maybe play the part of Artemis. Maybe because the filmers would need to know first that she could handle the role. She’d need to look like a badass, fight like a badass and say a line or two.

“The director (Patty Jenkins) and her husband (Sam Sheridan, author of” A Fighter’s Heart: One Man’s Journey Through the World of Fighting”) knew me from my boxing,” she told me via phone this week. “Artemis, the character, was an Amazon sort of Ann Wolfe. Now, many people think I’m a bad, mean em-effer but it takes others to know I have a soft side, like Artemis has a soft side…but I will fight to the death.”

That side of Wolfe was showed off when she campaigned as a pro fighter from 1998 to 2006. Sure, Queensberry rules were used but Wolfe’s intensity suggested she would go the extra 10 yards to finish off a foe…that she’d not use the “I’d die fighting” cliche without meaning it…that she could tear your head off and stick it down your neck, no matter if you were female, male, 50 pounds bigger than her.

Along the way, Wolfe won titles at four weight classes (154, 160, 168, 175) and held three of them simultaneously. She invited everyone from 106 to 200-plus pounds to have a go at her. But that era for female fighters was basically like every other era for women boxers. The market for their services, by and large, wasn’t robust. We’ve had a handful – a very small one – over the last few decades, of women whose ring exploits gave off ripples beyond the footnote status. Christy Martin made the cover of Sports Illustrated in 1996 and Laila Ali leapfrogged off her dad’s legend to make news noise after that. But really, for every one of them, dozens of other talented ladies find themselves hitting a ceiling of lack of interest, mainly from promoters and TV platform providers. Wolfe sure as heck did as she scrapped, to a 24-1 (with 16 knockouts) record.

Now 46, the Texas resident now regards boxing, it struck me, sort of like an ex with whom she collaborated on making some superlative offspring. She made sure I knew she knows that boxing has been a blessing. “It saved my life,” she states, recalling that she’d had a hard time finding a niche and had been homeless for a spell. Kicking tails in rings suited her quite well. “Boxing is bittersweet for me. Without boxing, I would not have been able to play Artemis in Wonder Woman.”

“But you know how much money I made in my loss (to Valerie Mahfood, in 2000)? One dollar,” Wolfe tells me. That’s because to convince someone to get in the ring with Wolfe, a pretty penny had to be paid, typically. (Also, Texas rules demanded some figure be put on a contract, to indicate the true nature of the exhibition.) And with TV programmers not ponying up big to fund such fights, promoters weren’t playing with large piles when Wolfe was smashing her way up the ladders. In about 10 fights, she said, she made a buck, because all available funds went to pay foes. One fight, against Vonda Ward, netted her a decent payday, $30,000, but she didn’t take in more than about $50,000 in all her years of toiling in the punch-for-pay ranks. One can understand someone feeling bittersweet about giving so much to an endeavor and walking around with the crooked leg, burned-out shoulders and other reminders of ring wars…and earning way under poverty-level wages for that toil.

So when the call came from the movie people, they were calling someone who could summon a certain fire from how she’d been treated. Wolfe says she said yes to the offer, though “I had zero acting experience.” Some bigwigs, she says, lobbied for someone more seasoned to play Artemis. Director Jenkins said, “I want Ann.” She met Wonder Woman Gal Godot and was impressed by her humility. “She spoke to me so nice and gentle.” And then Gal said, “This is Artemis,” Wolfe says.

Doubters were convinced – “I want Ann.” – and she got the part.

They offered to get her a cross-training program to get into fighting trim but she told them, nah, I got this. She trained some with the other Amazons but snagged a few bags and a jump rope and, in two months, she lost about 30 pounds to get film-ready ripped. During filming, Wolfe swung a massive axe and stuntpersons were wondering how that would go. Well, she told me. Her placement with the axe was exacting, as the boxing had implanted the ability in her to be able to swing the implement right where the director wanted it.

The mood of those watching her become Artemis affected Wolfe. Massively. During the first rehearsal, she felt the awe when filmers watched her in action. There was silence. “They were like, ‘Holy effing sh*t!’” Then, applause, she notes, and the director, in a tent, laughed approvingly.

What was Jenkins thinking, Ann? “That is a badass bitch!”

The experience, being appreciated for her power, presence and acumen, shifted her thinking. She now saw her fighting career in a new light.

“They believed in me,” Wolfe felt and basked in the warmth. “I wish the boxing community would have given me the same love! You know, I never said it…but now I do…I am the greatest female fighter that ever walked the planet Earth. I demolished all the opposition. I cleaned it out. And the boxing community never gave me the credit. Boxing didn’t know what they had in me. What I’ve done will never be done again, not in this lifetime.”

At the same time, she admits the sport gave her much. She knows that folks know no female trainer has cornered a once-major contender, as she did James Kirkland, on premium cable shows. “As mother to my children, I never had to prove to them what I am but, on this film, this was the first time I didn’t have to prove myself in work. Everyone knew…I could be a badass outside!”

One wonders…At 46, Wolfe looks like she could get into shape and handle anyone out in the ranks today. Would she? Will she fight again? No way, she says. That ship sailed and is not coming back. She doesn’t feel the need to prove a point now, not after it finally clicked. These film people’s reception of her made it so she allowed herself the luxury of giving herself full credit. “I am a legend,” she related to herself, under her breath. “They made me feel so good. But never in my life will I go back to fight in boxing.” It’s sort of like contemplating going back that ex. There were the good times but the darker pages made up large portions of chapters.

Lots of love and some harsh appraisals of the sport come from Wolfe today.

Given the opportunity to fight in a world title fight or act again, she’d choose the filming. “Some type of movie that changes lives. In the movie industry, they paid me to be a superhero. Boxing needs to allow women to be superheroes! In female boxing, I am Wonder Woman, on top of the effing field when it comes to women’s boxing. I am the best female in any combat sport. I don’t want to mention no names; I do not want to step on any toes but I believe that. And the movie people treated me like a human being, not like the boxing industry did. The fans are great!”

Her humility hadn’t been of a false variety; it seems clear. But the respect she felt on that film set catalyzed an epiphany. She wants to make sure the realization of her true worth, not as measured in purses, doesn’t get diminished by the media’s need to stir up negativity, start beefs or stir pots of rivalry with names like Ali and former UFC bantamweight champion Ronda Rousey. She also reminds me, again, to be balanced, to remind one and all that boxing is still a majestic place for have-nots.

“I believe boxing is one of the sports that can save so many lives. That’s what it did for me. The more boxing dies, the more children who are aggressive won’t find a place. ‘Bad’ kids are attracted to fighting but here, they can punch and not get in trouble. You don’t have to go to college, as with all the other sports, you have to go through college, mostly, to get to the pros. You don’t have to have no type of education. You can come off the streets to become a superstar. What boxing gave me…I wouldn’t have become Artemis. So, I’m a fighter, I don’t gotta talk sh*t. Another paper, they wanted me to roast other girls. Why people gotta be so evil like that? No, Wonder Woman is uplifting and triumphant and it allows girls to have superheroes. We have to have equal balance in superheroes. Kids can watch and say, ‘That’s like my dad.’ ‘That’s like my mom.’ Let women be super heroes alongside men!”

Typically, you’d have to watch this space for a humorous signature featuring our intrepid Michael Woods. Not this time, kids. Not when we can laud what seems to be quite the happy ending for Ms. Ann Wolfe, a real-life Wonder Woman indeed.