For Jayar Inson, long odds and opportunity in overseas fights 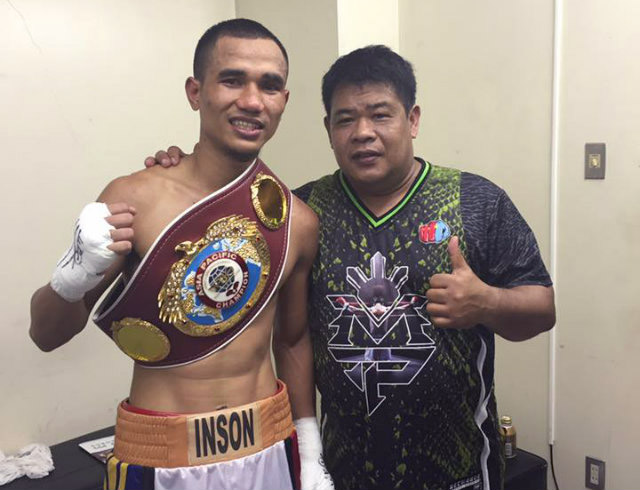 Jayar Inson knows a thing or two about being out of his comfort zone.

The 26-year-old southpaw from Davao City, Philippines, is set to face Thulani Mbenge in a 10-round battle of unbeaten welterweights on Saturday, far away from home at Emperors Palace in Kempton Park, South Africa.

“First, everyone is siding with [the other fighter], no one cheers for you, and you do not know anyone,” said Inson (13-0, 9 knockouts), one of two Filipino boxers who will compete on the card, which is headlined by South Africa’s Simphiwe Khonco (17-5, 7 KOs) against Filipino toughman Lito Dante (13-7-4, 7 KOs) in a 12-round strawweight fight.

There’s the jetlag from flying across the world, and visiting fighters often have to live with not getting the benefit of doubt from officials.

In December, when he traveled to Japan to fight Ryota Yada in Osaka, Inson scored a clear knockdown in the seventh round which the local referee called a slip. The absence of a count ultimately hurt Yada, as he wasn’t given time to recover and was knocked down twice shortly after to force the stoppage.

It was a fight he had moved up two divisions to accept, as there are few meaningful opportunities at home. “I don’t know, maybe it’s [to] experiment and jump to another division,” said Inson about jumping from fighting at 133.5 pounds last August to 143.5 pounds about three months later.

Inson, 26, sticks out in any boxing gym in the Philippines. He stands 5 feet 10 inches, a rare boxer with height and reach in a country where any athlete over 5-foot-8 is looking toward pursuing the national pastime of basketball. Though he’s no Manny Pacquiao in terms of speed, he’s a hard-hitting left-hand puncher with deceptive quickness when getting that shot in.

He first started boxing at the age of 13 when his uncle Teodoro Peticio taught him and his brothers how to throw their hands.

His parents both worked on a chicken farm to provide for the family, and Inson was busy investing in his own future in the ring, winning four golds at the Private Schools Athletic Association (PRISAA) nationals, a gold and a silver at the Philippines’ National Games, and a gold, a silver and a bronze at the National Open as an amateur, he says.

He trained as an amateur at the Barangay Una Boxing Gym run by Tony Boy Floriendo, a Philippine congressman from Inson’s province of Davao del Norte. Floriendo had other connections in the area, which included awarding scholarships to boxers at the University of Mindanao.

Inson says he received his Bachelor’s degree in Marketing Management in 2013, and turned pro that year. He hopes to use his educational background to establish a business after his fighting days are over, and to improve the conditions for boxers in his country.

“To become a world champion to be able to give my family a better future,” said Inson of his goals in the sport. “I want to draw attention to the Philippine boxers. I hope professional boxers will be given benefits, to be given a Philhealth membership (socialized medical insurance in the Philippines) would be enough, and free medical [care].”

Since turning pro, Inson has trained with Nonoy Neri, a longtime assistant trainer of Pacquiao, at the MP Gym run by Neri in Davao City. Neri has been away from Davao for the past few months, first in Manila and now in General Santos City, helping Pacquiao prepare for his WBO welterweight title defense against Jeff Horn on July 2 in Australia (July 1 in the U.S.).

Neri helped him devise the strategy for this fight, and assistant Samson Amongo took over for day-to-day training and is in South Africa with Inson. Little footage exists of Inson, but even less is available online of Mbenge (10-0, 10 KOs), who has been pro for two years but has fought boxers with a combined record of 43-4-6 in his past four bouts, including a seventh-round stoppage of Shaun Ness in April to win the South African 147-pound title.

Inson says he hadn’t seen much of Mbenge. “I was not able to watch closely his style. Maybe he is a stylist,” said Inson.

Mbenge’s promoter, Rodney Berman of Golden Gloves Promotions, hopes the fight shows that Mbenge is as good as he believes.

“I have huge respect for Filipino fighters and Inson is a step up in class for Mbenge. So I’m expecting a very competitive fight,” said Berman, who described Mbenge as “a prohibitive favorite in the betting.”

“Inson [is] a yardstick as to whether Mbenge is what I think he is capable of.”

As an underdog again, what gives Inson confidence he can win?

“Because I have been training for a long time for our fight,” said Inson.

And what’ll a win do for his career?