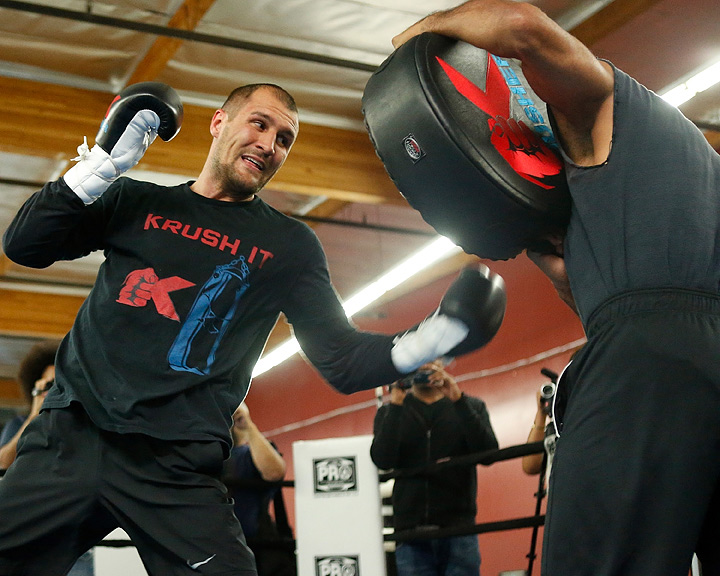 One of the variables that people are considering going into the Andre Ward-Sergey Kovalev rematch is Kovalev’s insistence that he was over-trained going into the first collision, that he ran out of gas late because he got bad advice from his now former conditioning coach.

“Nothing plays in my head except that this time I will be the winner at the end of the fight,” said Kovalev, the 34-year-old Russian who now lives in California. “You saw the first half of the last fight, I won those rounds easy. In the later rounds I was very tired, I ran out of gas. For this fight I am training correctly. Last time I trained too hard. This camp I will do everything that I usually do when I train but I will not do it as much. I am training very smart this time. My training camps are usually very successful, as well as my fights. I went back to what has worked for me in the past. On June 17 I will be prepared to get my belts back.”

Forgive my cynical nature, it could be the result of these tumultuous times we are in, maybe my antennae get pricked too quick these days.

Have we all not heard that over-trained excuse, I mean explanation, before?

Could it be excuse making? Really, is that a real-deal thing? These are professional athletes, and they have stamina far in excess of us mortals…they can go after we’re gone, after we’d have tapped out, twice over. I posed the question to Ray “Boom Boom” Mancini, the fighting pride of Youngstown, Ohio, the perpetual motion machine who entered the International Boxing Hall of Fame in 2015. Tell me about “over-training,” Ray, please…BS or legit?

“Yes, it is a real thing,” the 56-year-old former lightweight champ told me. “I did it against Bramble the first fight.” Mancini and Livingston Bramble, a Jamaican, tangoed in June 1984. Bramble scored a 14th-round TKO win and snagged Ray’s WBA lightweight title.

“Over-training and being under-trained have the same symptoms… lethargy, listlessness and fatigue. The difference is, when you’re under-trained, you are slow, listless and have no energy. When you are over-trained, you have gas in the tank but the motor is only on one speed, first gear.”

Mancini, a beast at lightweight, holds a 29-4 mark. He appeared on the Everlast podcast TALKBOX on Tuesday, and he shared about over-training after that phone hit.

“You can’t change speeds and you’re very lethargic. Both are bad, bad feelings, and screw with your head. When you are over-trained, you know you worked hard and paid the dues, you just can’t understand why your body isn’t reacting the way you need it to!”

Talk to me, fight fans. Could this be the difference maker, Kovalev training smarter and not harder, for the sequel?