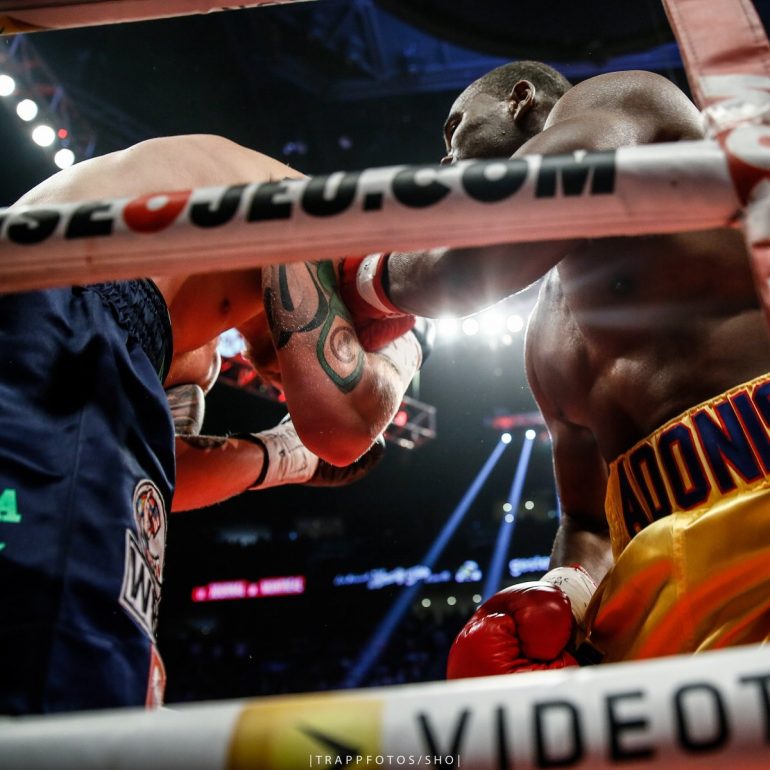 It was over before it ever even started.

Adonis Stevenson pulverized Andrzej Fonfara with overhand lefts — dropping him in Round 1 — and after numerous unanswered shots on a sitting-duck opponent, Virgil Hunter stopped Saturday’s contest at Montreal’s Bell Centre just 28 seconds into the second round.

It was a quick but sound call by the Bay Area-based trainer: Fonfara wasn’t defending himself against one of the sport’s most dangerous punchers.

The WBC light heavyweight beltholder — making his eighth title defense — uncorked left hand after left hand in the Showtime main event, and each shot met its target. Fonfara gave Stevenson (29-1, 24 knockouts) trouble in the first fight, and even dropped Stevenson in the ninth round, but he was no match this time.

“I’m the greatest, I’m the king,” said Stevenson, 39, who wore a crown and matching red robe. “I don’t have to call anybody, baby. I’m Superman, baby. Whoever Al Haymon puts me in with, I’m ready, baby.”

That’s been the issue to date. Stevenson, despite clearly possessing all the talent in the world, has feasted on sub-par opposition since wresting THE RING’s 175-pound championship from Chad Dawson with a first-round KO in 2013. Stevenson was eventually stripped of the title for that reason, and is now ranked No. 3 behind Andre Ward and Sergey Kovalev.

A matchup against the winner of that fight is one of the best that can be consummated in boxing, but there are other viable options for Stevenson, namely bouts with fellow Canadians Artur Beterbiev and Eleider Alvarez. It figures to be Alvarez who gets his shot next after he decisioned Jean Pascal in the Showtime co-feature. The Colombia native is the WBC No. 1 contender and Stevenson’s mandatory is due anyway.

Stevenson also dropped Fonfara (29-5, 17 KOs) in the opening round of their first meeting, but the 29-year-old Pole hung tough and gave the champ problems. That was in 2015. Stevenson said his left hand was injured in that fight, but it was clear it was 100% this go around.

He couldn’t miss with his power hand, and Fonfara’s face was marked and red despite fighting for just three minutes and 28 seconds. He seemed ready to go at any moment when Hunter (who is best known as Ward’s trainer) had seen enough and jumped up on the apron.

“There was no need to continue, he was hurt in the first round, when he came back to the corner he wasn’t OK,” said Hunter, who was in France for Olympic super heavyweight gold medalist Tony Yoka’s pro debut earlier in the day. “I told him not to throw punches, just defend (in the second round).

Fonfara couldn’t defend himself though. It was a matter of time before he was out on his back, and each Stevenson left hand that landed flush pushed him closer to that fate.

“I tried to out-punch him, I was not the same (after the knockdown),” said Fonfara, who added he agreed with Hunter’s call. After all, Fonfara was knocked out in one round by Joe Smith Jr. last year. “He showed me tonight he’s really champion. I must rest now, back to work again, train harder, work harder.”

Now it’s time for Stevenson to finally prove it against the best.