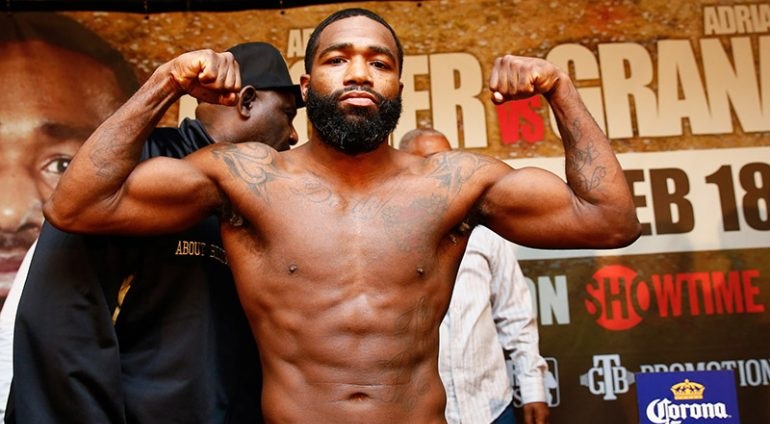 Camp starts today, Friday, in Colorado Springs, and it will be a return to a place that represents what it was like before fame, fortune, expectations and all formed into something of a tumor.

Adrien Broner went to Colorado and worked his tail off in that altitude back when he was 18, and he had like 300 amateur fights and the pro sphere was there for the taking. It was terrain to be conquered and he knew he’d get ‘er done. The speed, the skills, the flash and panache, he’d be ascending and there’d be no stopping him. But reality intruded…

Oh yes, there have been successes. Four crowns, solid wins, for certain, but a few too many mentions in the acting up section of the TMZ archives have more than a few people thinking Adrien Broner’s best days are behind him and Mikey Garcia is going to kick his tail and that this is his cash-out fight.

Mike Stafford is, but of course, not in that camp. As he set up the camp in Colorado, he told me that, darn right, he needs to see “AB,” 27, working his butt off, seeing his deeds match his words, which were of the “saying all the right things” manner during a Thursday afternoon call to hype the July 29 clash at 140 pounds, on Showtime, from a site to be determined.

“Adrien knows that he has to be in top shape if he want to take over, and for any (big) fight, Terence Crawford or whoever,” said the Cincy-based boss. “He’s ready to have all that legal stuff behind him. Now the law looks at him differently than you or me…but yes, it comes with the territory. Anyway, he always weather the storm…and he’s ready to go!”

Broner has a hater brigade ready to slay him on social media. They think this is a cash-out fight…and think he’s been in party mode and won’t be able to get into A-grade form for July 29. Stafford says Al Haymon, Showtime and, of course, he is fully behind AB and he’s confident we see primo AB on the 29th. “He lives for his family; it’s a major part of his life. Is he more mature? Yeah, he’s the one orchestrating everything; this is who he wanted to fight.”

One note: Win or lose, this might a shush on fans complaining Broner isn’t colliding with other A sides. Khabib Allakhverdiev, Ashley Theophane, Adrian Granados…but now everyone has to give props, AB is going after top-tier prey. And yes, Team Broner does think highly of Garcia, from a fight family, who did a neat trick of moving toward the pound-for-pound ladder while sitting out two years. “Mikey has proved himself to his promoters and his fans,” Stafford said. “He’s one of the top guys out there. He’s got a lot of KOs. But so do do we!”

Stafford didn’t voice any worry that his guy, installed at welter after fighting Theophane, won’t make weight. On Twitter, this topic does pop up…

The coach told me he expects his kid wins using some of the same tactics on his three-fight win streak and “countering and using our speed. My kid is extremely smart. Now I’m not taking nothing away from their guy but I hope they don’t look at the fight with (Marcos) Maidana and think that’s how Adrien is. Maidana had two of his best rounds and if we had one more round we would have knocked him out! Broner-Garcia should be a good one! Garcia put on his pants just like Adrien do; he’s not Superman. Everything he do, we do.”

My take: Broner seems to be the heavy underdog if we’re polling via social media. People seem to think Garcia holds his power at 140…and most aren’t opining that Broner is quite likely – or maybe very likely – the best boxer, on paper, Garcia has yet faced. Is this a coin flip fight to you? Or no, do you think Mikey’s star is still shooting and the Broner train is getting closer to last stop? Talk to us in the comments section!

The law also looks at Michael Woods differently than you or me…but that’s only because his vigilante ways have served the streets of Brooklyn well. The Avengers still won’t let him join their ranks but they will someday…Oh, they most certainly will…