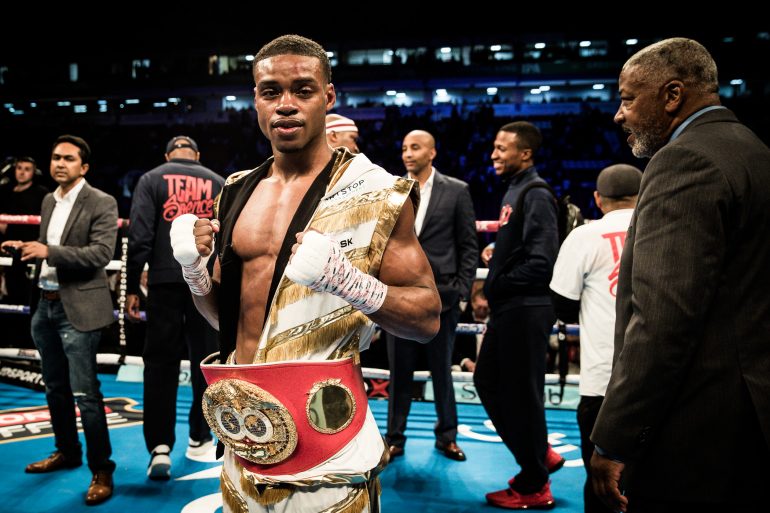 NEW YORK — Errol Spence Jr. won the title Saturday in England, but he finally received the symbol of his championship work: his welterweight title.

IBF President Daryl Peoples presented Spence with the red belt Thursday at The Palm in midtown as the 27-year-old’s breakthrough victory over Kell Brook was shown on a television behind them.

Spence (22-0, 19 knockouts) had already viewed his handiwork three times — all on his phone — but took a glance to watch the 11th-round finish and admire the highlight of his young career.

The Texan broke Brook’s left orbital bone during the 147-pound matchup, and finally, the Brit surrendered. Spence is a humble, quiet type, but he felt no remorse for the punishment he inflicted on Brook’s eye.

“He called me ‘Jeff Lacy 2.0,'” said Spence, sporting a slim gray suit with white shirt. Lacy was a heavily hyped American who traveled to the U.K. and was dismantled by Hall of Famer Joe Calzaghe in 2006. “That’s the only thing he said that bothered me.”

Since Spence announced his arrival on the world’s stage, everything has been a bit different for him. For starters, he was at a neighborhood gas station taco stand (that’s right) on Sunday, when he was mobbed by adoring fans. And yes, Spence paid for those beef tacos himself.

What’s next for the 2012 Olympian? He relishes a unification fight against dual titleholder Keith Thurman — a matchup that would crown a new RING welterweight champion — but “One Time” is on the sideline for at least the next six months following elbow surgery.

With that fight highly unlikely for 2017, Spence has other designs. He’d like his first title defense to come in Dallas, near his hometown of DeSoto, but against whom?

“The ideal would probably be Danny; he’s more accomplished. That’s the fight I would take over the other two,” Spence chimed in. “Danny has a big name. He basically cleaned out the 140-pound division. I think [Porter and Peterson are] equal.

” … If I do fight at home, I doubt somebody like Danny Garcia will come to town. I have to go over my options, see what plans Showtime has for me, see what Al (Haymon) has for me, and go from there.”

Porter was in Sheffield for the fight and Espinoza said he could sense that Shawn was anxious for the challenge. He’s coming off a stoppage victory over Andre Berto in April. Garcia lost his title to Thurman in March and Peterson returned after a lengthy layoff with a decision win over David Avanesyan in February. The Garcia fight was televised by Showtime parent network CBS; the other two fights appeared on Showtime.

“I think all of them are [realistic options],” Espinoza said. “You look at their recent track records, none of those guys is shy about taking tough fights.

When, where and against whom Spence will first defend his title is a mystery for now. That will all be settled in the coming weeks.

What is clear: Spence is here to stay, and even bigger things lie ahead for the uber-talented welterweight.