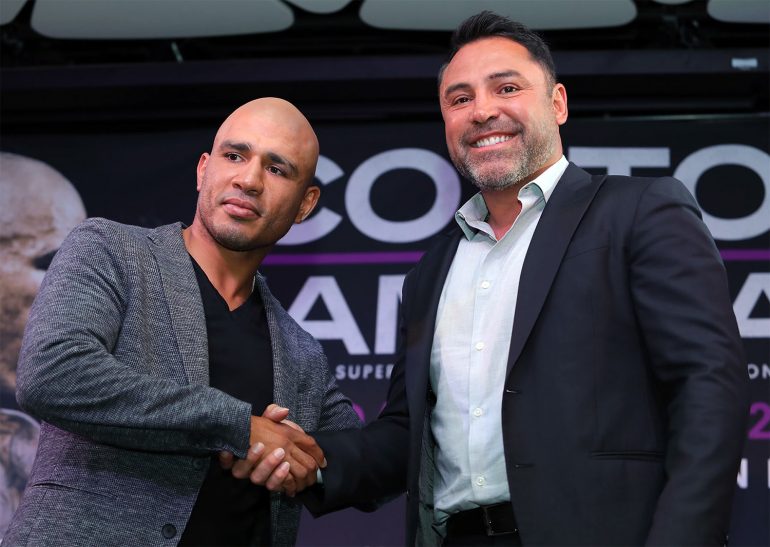 The company announced Wednesday that the future Hall of Famer signed a multi-fight deal with Oscar De La Hoya and Co. that will also see fights on ESPN from Puerto Rico featuring the Miguel Cotto Promotions’ stable of fighters.

“Miguel Cotto is not only a legend in the ring, but on the entire island of Puerto Rico, which has one of the richest boxing traditions around the globe,” said De La Hoya, the Chairman and CEO of Golden Boy Promotions. “Our new partnership will include Miguel’s upcoming fights, working with Miguel Cotto Promotions’ talented stable of fighters and revitalizing boxing in Puerto Rico.”

Cotto’s fight against Kamegai, for the vacant WBO junior middleweight title, will be the first of the deal. The bout is set for Aug. 26 at StubHub Center in Carson, California, and will be televised by HBO.

The only four-division champion from Puerto Rico, Cotto fought twice under the Golden Boy banner: defeats to Floyd Mayweather Jr. and Austin Trout.

The 36-year-old has been out of the ring since November 2015, when he dropped the lineal middleweight championship to Canelo Alvarez. Cotto was slated to fight James Kirkland in February, but the Texan withdrew with a fractured nose.

“I’m very proud to establish a tremendous partnership with Golden Boy Promotions and Oscar,” said Cotto, who is trained by Freddie Roach. “It couldn’t work better — from a boxer to a boxer. We share the same mentality and language of the sport and the business. We will create the perfect opportunities for the sport of boxing and the fans.”