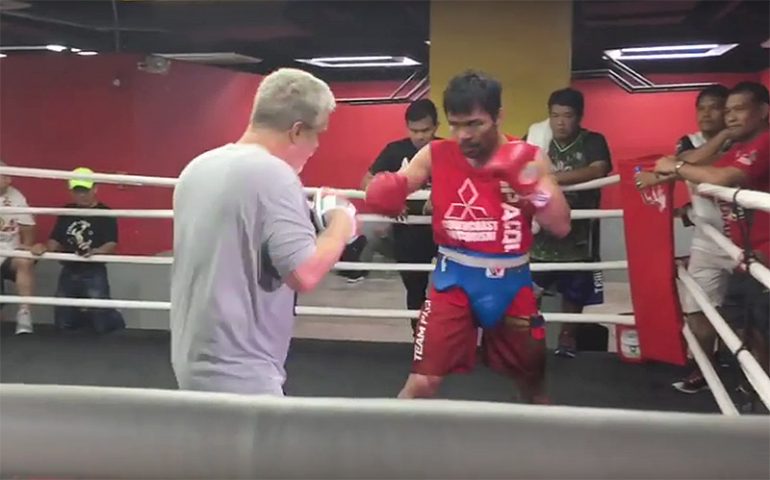 The Filipino boxer-turned-senator capped off his training week Saturday with seven rounds of sparring – three against Leonardo Doronio and four with Sonny Katiandagho – as the days tick down to his WBO welterweight title defense against Jeff Horn in Brisbane, Australia.

Pacquiao (59-6-2, 38 knockouts) had his chance to dish it out, particularly to Doronio, who had landed his share of punches on Pacquiao earlier in the week, say those at the Elorde Gym at the Five E-Com building in Pasay City, Philippines. Katiandagho was able to get his work in off the jab before Pacquiao’s experience and movement broke his guard down.

“[Pacquiao] hurt them today,” said trainer Freddie Roach. “It’s been a long fucking time since he’s done that in sparring.”

The identity of Pacquiao’s third sparring partner still to arrive with Michael Koncz remained a mystery to those in Pacquiao’s camp, but a fourth, from Australia, would not be making the trip after turning down the invite, says Roach.

Pacquiao’s training camp takes place against the backdrop of clashes between military and local terror groups in the southern Philippine region of Mindanao, which is now under martial law. Pacquiao says they might relocate training camp to his hometown of General Santos City – within that region – next week.

After his workout, the attention turned to basketball, with his supporters holding an impromptu cheer in the locker room for the Golden State Warriors, a favorite team in the Philippines. Pacquiao says he’s picking the Warriors to win the NBA Finals over the Cleveland Cavaliers, which defeated his favored Boston Celtics, in five games.