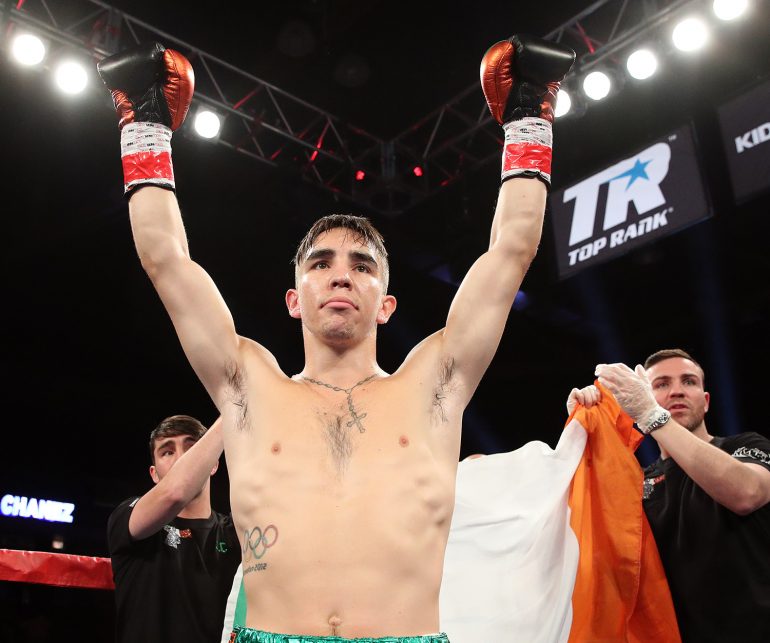 Photo by Mikey Williams-TOP RANK
26
May
by Francisco Salazar

Conlan knocked out overmatched Alfredo Chanez in the third round before a partisan crowd at the UIC Pavilion in Chicago, Illinois.

With the win, Conlan improves to 2-0, with two knockouts. Chanez, who resides in Tijuana, Baja California, Mexico, drops to 4-5, with 2 KOs.

Conlan, who represented Northern Ireland at the 2016 Olympic Games in Rio de Janeiro, made his pro debut to much fanfare on March 17, stopping Tim Ibarra before a sold-out crowd of more than 5,200 inside The Theatre at Madison Square Garden in New York City.

Friday night’s crowd in Chicago was considerably less, but still boisterous for Conlan. 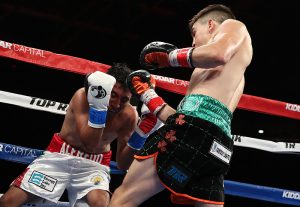 Chanez was giving up considerable size and reach to Conlan. Chanez tipped the scale at 121.5 pounds at Friday’s weigh-in, almost seven pounds higher than his previous career-high (114.7 pounds).

Conlan dropped Chanez in the opening round with a right uppercut to the head. Chanez stood up on wobbly legs, but was able to hold on and get through the round.

The taller Conlan was the aggressor, raining numerous hard punches down onto Chanez. A few punches strayed to the back of the head, but Chanez repeatedly complained to referee Celestino Ruiz.

Conaln ended matters towards the end of third round, landing a series of left hooks to the body, dropping Chanez to the canvas. Referee Celestino Ruiz counted Chanez out at 2:59.

“This was the first time fighting a guy with a weird style, but that’s part of the pro game,” said Conlan after the fight. “He seemed to be there to make you look bad. I’m not happy with my performance.

Conlan, who is managed by former middleweight title challenger Matthew Macklin, is scheduled to fight July 2 on the undercard of the Manny Pacquiao-Jeff Horn fight at Suncorp Stadium in Brisbane, Australia.

Midway through the first round, Saucedo dropped Lopez with a counter right cross to the head. The southpaw Lopez did well in spots, throwing and landing three-four punch combinations.

Lopez’s rallies would be short-lived as Saucedo was effective in landing counter right hands or left hooks to the head. Saucedo worked from the center of the ring, cutting off the ring to keep Lopez in front of him to score with repeated blows to the head.

Scores were 78-73, 78-73, and 77-74 for Saucedo, who is eyeing a showdown with Top Rank stablemate and unbeaten junior welterweight Jose Ramirez.

In the opening bout of the ‘Solo Boxeo’ telecast, welterweight Mike Alvarado (37-4, with 25 KOs) stopped Matt Strode in the second round.

While his best days were about five years ago, Alvarado still dominated the action against Strode, who had dropped his previous two bouts.

Alvarado staggered Strode (24-4, with 9 KOs) with a right hand in the opening round. Moments later, a barrage of punches from Alvarado dropped Strode to the canvas.

Strode hung in there, but was outgunned by the more-accurate and aggressive Alvarado. With about 30 seconds left in the second round, a right hand staggered Strode again. Moments later, a barrage of punches promoted referee David Smith to step in and stop the bout at 2:40.

It was Alvarado’s first fight since June 25, when he won a hard-fought eight round majority decision over Joshua Torres.

Welterweight Egidijus Kavaliauskas (17-0, with 14 KOs), who is managed by Egis Klimas, stopped Daniel Echevarria (19-5, 17 KOs) in the sixth round.